Mercenary Kings looks like another throwback, but a much deeper game hides beneath the surface.

With its beautiful pixel art and tense run-and-gun gameplay, no one could be blamed for mistaking Mercenary Kings as a nostalgia trip for fans of NES classics like Contra and Mega Man. That inspiration is obvious, but it's only the beginning.

The real core of Mercenary Kings' gameplay loop is borrowed from a more recent — and more divisive — genre: crafting-focused action-RPGs of the variety popularized by the Monster Hunter series. It may look old-school, and the moment-to-moment gameplay may be action-packed, but this is a game about grinding. About repeating missions to get the materials you need to build bigger, better weapons. About using those weapons to take on ever-more-intimidating bosses.

It may actually do a better job of using this formula than its inspiration.

Mercenary Kings follows a group of action heroes called — you guessed it — the Kings as they infiltrate Mandragora Island, the secret home of terrorist organization CLAW. The game's minimal plot is told via snippets of dialogue between missions, with a focus more on humor than drama. The jokes don't always hit, but they're such a brief distraction that I found it hard to be annoyed.

I felt skilled even against weaker opponents

Beyond those tidbits of story, you'll select a mission and be transported to one of a small handful of levels. Within these levels, you run through shooting down enemies and performing some basic platforming. Mercenary Kings' jumping doesn't feel great — there's a noticeable lag between tapping the jump button and your character actually leaping into the air — but I learned to compensate pretty quickly, and precision jumping is kept to a minimum.

Most of your time in levels will be devoted to combat. Enemies are pretty basic at the start — just weak soldiers who fire single shots. But as you progress, more and more baddies get added into the mix — bigger guys with flamethrowers and a larger health pool, robots that can jump over you, tiny helicopters that drop massive bombs from above, etc. Like a classic platformer, each new enemy adds a wrinkle that can only be overcome by smart pattern recognition.  As I mastered these patterns, I felt skilled even against these weaker, repeating opponents. 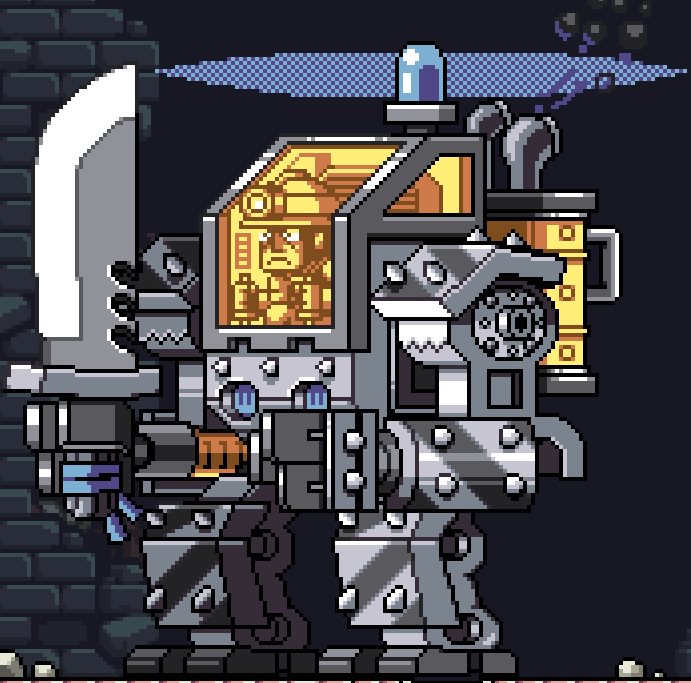 Amplify that satisfaction tenfold for Mercenary Kings' great boss encounters. From massive tanks to killer robot puppies, these foes could drain my health bar in a few hits. But again, they follow very clear patterns. When one boss shoots a barrage of missiles, they arc in the same direction every time. When one leaps into the air, that is your one and only chance to roll under them and get to the other side before they crush you. The game expects you to watch carefully and put these pieces together quickly, and I felt fantastic every time I pulled it off.

Bosses have one trick up their sleeves aside from their regular move set: retreat. When a boss' health has been depleted most of the way, the enemy will begin flashing red. If you give them enough time after this point, they'll sink into the background of the stage, running away to another area. While chasing down a near-dead boss can be annoying, especially with a timer running down, it added some excitement to these conflicts, making the eventual victories even sweeter. 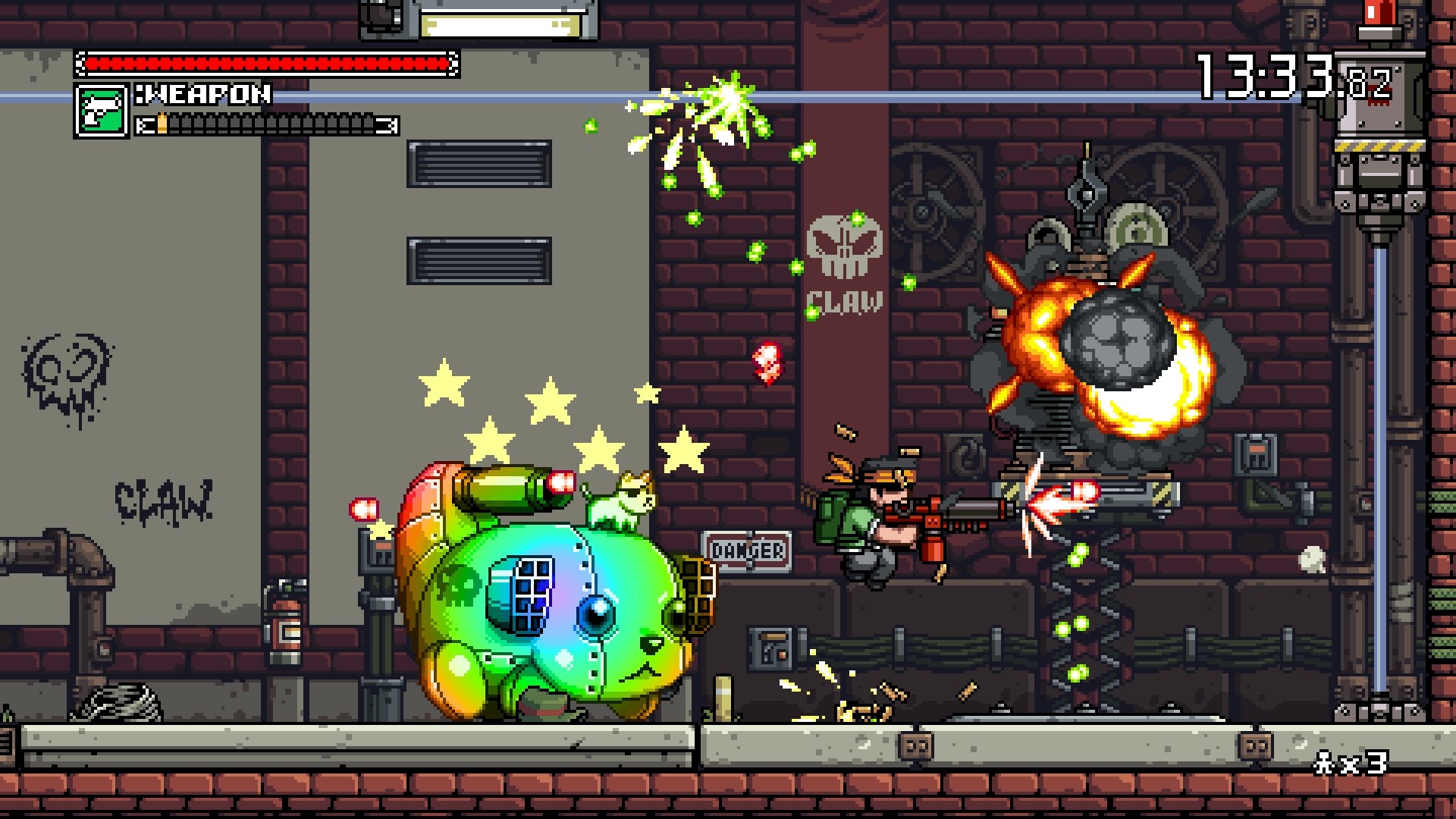 Boss retreats are also aided by the game's non-linear level layouts. I was initially disappointed at the small number of levels available in Mercenary Kings and the fact that missions send you through those same levels over and over, but you're not working through levels in a straight line from point a to point b.

Whether my mission was to track down a boss, collect certain materials or blow up a stash of weapons, I chose my own preferred path to cut through each area. Taking the fastest route gave me an opportunity to beat a mission's par time, while exploring thoroughly allowed me to complete bonus objectives, some of which are hidden until you accomplish them. Add new locations, secrets and enemy placement introduced as I returned to each level, and there was plenty to keep things fresh for me.

Mercenary Kings gives good reason to replay the same missions too. Beyond progressing the story, your core goal in the game is to collect dozens of resources to help build the perfect gun. Your weapon is pieced together part-by-part, allowing you to equip unique receivers, barrels, magazines and more. A ton of bizarre creations are allowed within this format. Want a gun that has the receiver of a magnum, the barrel of a shotgun and a sniper sight for improved accuracy? You can make that happen.

Mercenary Kings' gun crafting system is brilliant primarily because it does such a good job of making each part feel like it has a strong and immediately recognizable impact on the feel of the gun. A super-powerful gun might only have a few bullets, a long reload time and knockback that slides your character along the ground as you shoot. A rapid-fire machine gun might allow for more shots per second, but each hit will do a lot less damage, and low accuracy will cause bullets to veer off target. I had to weigh a lot of pros and cons, making decisions that were a lot more interesting than simply what does the most damage.

I also had to make tough choices regarding what items to carry into battle. In addition to your weapon, you have two item slots that can be filled by anything from first aid kits to grenades. Smart players will adjust their loadout depending on the mission. If you're taking on a boss for the first time, you probably want some rations or a first aid kit for fast healing. If you're entering a level full of concrete barriers, carrying some C4 will make it much easier to get around. Each item adds another tiny layer of strategy to consider before every mission.

If you really need more than two items to be prepared or find yourself struggling against a particularly tough boss, you can always invite friends to join in. Mercenary Kings features two- to four-player co-op, both online and locally. There have been some reports from PlayStation 4 players about online games crashing during boss battles, but all of my experiences both on PS4 and PC have had no major problems and very little lag.

The game's giant maps provide a lot of opportunity for chaos in co-op play but also for unique strategies. You could stick together, sure...or you could try to cover more ground, with one player hunting down bonus objectives while another goes for the main goal. Want to take down a boss as quickly as possible? Have one team member fight it while another waits at the area the boss is likely to run off to once weakened. Co-op doesn't fundamentally change how you play Mercenary Kings, but it certainly expands the options available in some very intriguing ways.

Mercenary Kings builds on the simplicity of classic run-and-gun shooting gameplay in an elegant way. The game is actually overflowing with content, but it's in the form of tweaks to the formula rather than giant shifts â a new enemy here and there, a gun part that completely changes your approach and so on. The repetition central to the game rarely bothered me; it's key to the sense of mastery over each piece of content, and it makes each small change all the more significant.