The Amazing Spider-Man 2 opens with the death of Peter Parker's beloved Uncle Ben.

The most formative moment of one of the planet's most beloved superheroes plays out as helpful on-screen prompts inform me that the left stick will allow me to walk to the mission target, the soon-to-be-lifeless body of my beloved uncle. This instructive moment is a useful touchstone for the experience of playing Beenox's and publisher Activision's latest attempt at Spider-Man. All the necessary pieces are present. Some of them are beautifully crafted. But they're rarely assembled in a way that makes any sense.

Beenox's already-great Web Rush mechanic returns, which lets you pick a point in the world on the fly and watch as Spidey dynamically finds a really cool-looking path to that spot. But Beenox has made some additions to swinging to make it really sing.

Unlike 2012's Amazing Spider-Man and its reality-defying mystery webs that attached to clouds and enigma, The Amazing Spider-Man 2 features actual webs connecting to actual buildings, with one trigger mapped to each hand. Note to all those Spider-Man developers who come after: This is the only way to do web-swinging properly. It provides better control than the hero has ever seen in a video game, adding a little skill and feeling right. Paired with some beautiful acrobatic animation for Spidey, swinging through even a Manhattan that's one fifth the size of actual Manhattan is a joy. 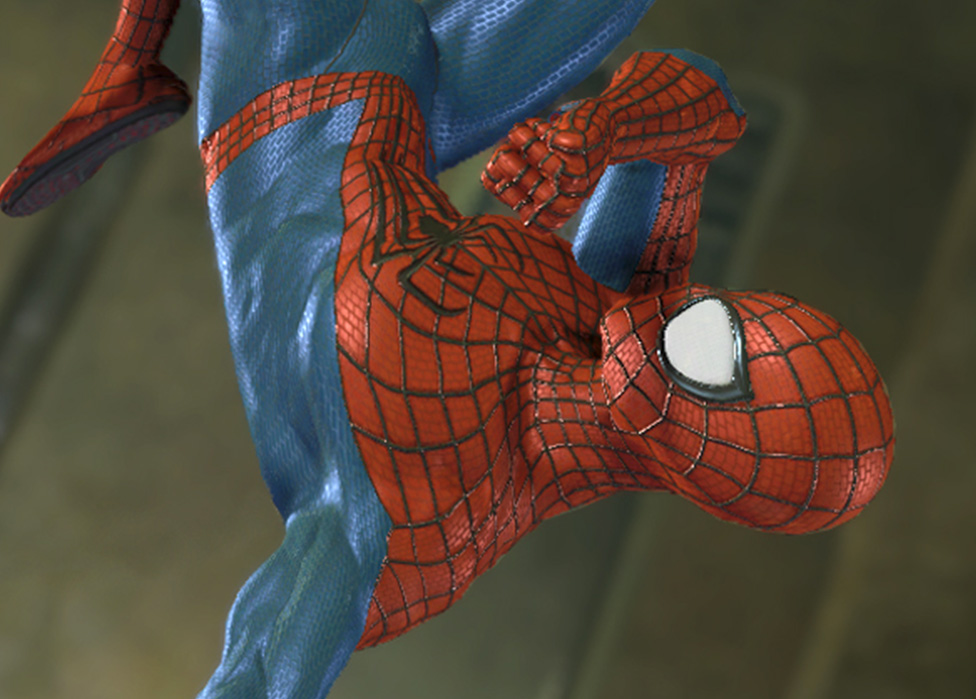 Beenox attempts to add to this repertoire with a new slingshot move, where our hero flings himself from webs connected to two adjacent buildings. The problem: a prolonged wind-up and anemic launch make this move markedly slower than just swinging normally. The Amazing Spider-Man 2 lets you waste tech points collected around the city to upgrade this skill and it's still slower than swinging.

This isn't a big deal, obviously — you could ignore the move entirely if you like. But it's emblematic of the seemingly thoughtless way many of The Amazing Spider-Man 2's systems have been constructed and interact with one another.

There are a ton of alternate Spider-Man costumes, each with its own set of bonuses to Spidey's skills. It's a cool idea ... except each suit has its own experience level, which increases its specific bonuses. So the longer you use any one suit, the less incentive you have to switch.

The dialog in cutscenes is pretty good, but the rest of Spidey's mid-combat and city traversal lines (which you hear far more often) are almost uniformly, skin-crawlingly horrific. A real line I was subjected to multiple times: "This one time I fought somebody who was a real loser, but they're still better than you!"

At the risk of belaboring my point:

A promising story-line that casts Kraven the Hunter as Spidey's mentor drowns in a torrent of tacked on super-nemeses.

There are dialog options in conversations, but you can select all of them without consequence.

While dressed as Peter Parker in a cutscene I was insulted for my "bargain-basement suit" (I was wearing a hoodie).

A dramatic scene with Harry Osborne was robbed of much of its potency when his volume level began to shift at random.

I could go on. For a while.

But nowhere is The Amazing Spider-Man 2's "good idea/bad execution" dynamic more obvious than in the new "Menace" system, which goes down in history as the worst thing that the character has ever been involved with — including emo Peter's Spider-Man 3 dance number.

Manhattan is littered with crimes for Spider-Man to stop, from police chases to burning buildings. Every time Spidey intercedes in one of these situations, he improves his reputation, filling a "heroic" meter, which provides further bonuses to his suit stats. If he waits too long to intervene, the crime will happen and he'll lose reputation until he's labeled a "menace." As a menace, Spider-Man is constantly assaulted by gun-toting soldiers and robots. His progress is even impeded by electric netting spread between buildings.

As the game progresses, you're presented with far more crimes than you could ever stop. So you can either keep grinding repetitious side quests to buy yourself enough time to get to your next mission, or just accept that you're going to watch a lot of innocent people die and you're going to get harrassed. 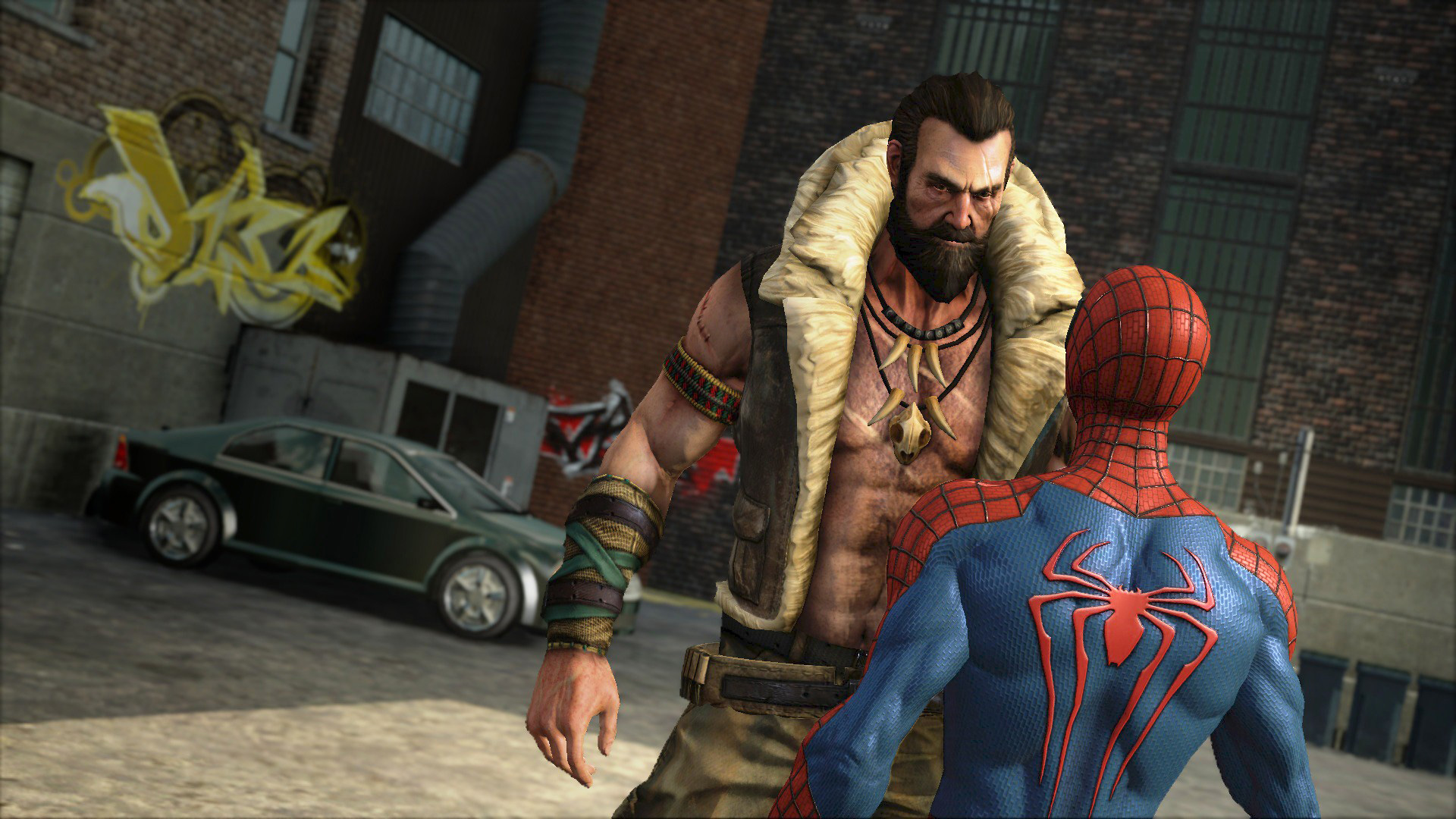 This system is bad on every conceivable level. It pushes you into dull sidequests with minimal rewards. It forces you to ignore crimes constantly (or get to them seconds too late), which feels very unheroic. It makes the idea of cruising around town looking for some of the 300 collectible comic pages or other knick-knacks unpalatable in the extreme. And yes, this horrid system persists even after the game ends.

These bad decisions weigh The Amazing Spider-Man 2 down so badly that even its decent bits can't rise to the top. Combat is a rhythm-based affair pretty much directly lifted from the Arkham games, but it's at least serviceable and looks terrific. Stealth sequences where Spidey zips between hiding spots silently taking out enemies are ... well, they're also an Arkham rip-off, but they're well done and, as opposed to 2012's Amazing Spider-Man, set in environments that actually seemed designed to accommodate them.

I'm 33 years old and at this point I've accepted that there's probably never going to be a truly great Spider-Man game. If the dispiriting The Amazing Spider-Man 2 is any indication, Activision and Beenox may have reached the same conclusion. There have been many worse Spider-Man games than this. But I can't recall one that's swung so conceptually close to greatness only to let poor execution drag it back to Earth.