Super Time Force is the dumbest smart shooter around

Though the game was teased in late 2011, it wasn't given a name until 2012. Since then, it's undergone transformation after transformation as Capy played with the thing that sets Super Time Force apart from the retro-crazed re-imaginings of a now departed console generation: time itself.

On the surface, Super Time Force is a familiar mix of old-fashioned aesthetics and elbow-jabbing nostalgia. But Capy has found more than a life raft with their clever implementation of time travel and cause and effect. They've mined a barely touched vein of originality.

Even when jokes aren't sharp enough to cut, they're heavy enough to bludgeon towards a chuckle

Super Time Force follows a team of well-intentioned mercenaries led by Colonel Repeatski, an idiot with apocalyptically poor judgment, as they attempt to "fix" everything wrong with modern times by blowing things up in the past. The story here is a scaffolding for bad puns, hyper-referential '80s humor, and poop jokes — no, really, they take one poop joke as far as it could conceivably go — but that's not a problem. The puns and references and even the poop feature some pretty sharp writing, and when the jokes don't quite cut, they're heavy enough to bludgeon their way through to a chuckle or two.

The story also provides a framework through which Capy can provide a wild amount of variety and go absolutely berserk with high-concept level design and have it fit. Medieval times followed by a trip to 1,000,000 B.C.? Sure. Why not.

On the surface, Super Time Force looks like a bizarrely-themed but conventionally-styled throwback shooter. You start with three characters, each with a different primary attack and charged skill — one character has a sniper shot that bounces on walls, for example, while charging her attack gives a more powerful blast that fires through walls. Another doesn't have a gun, instead holding a shield that can reflect bullets and a charge move that releases a circle of protective energy. As the game progresses, you can save other heroes from the ravages of time, adding them to the roster. 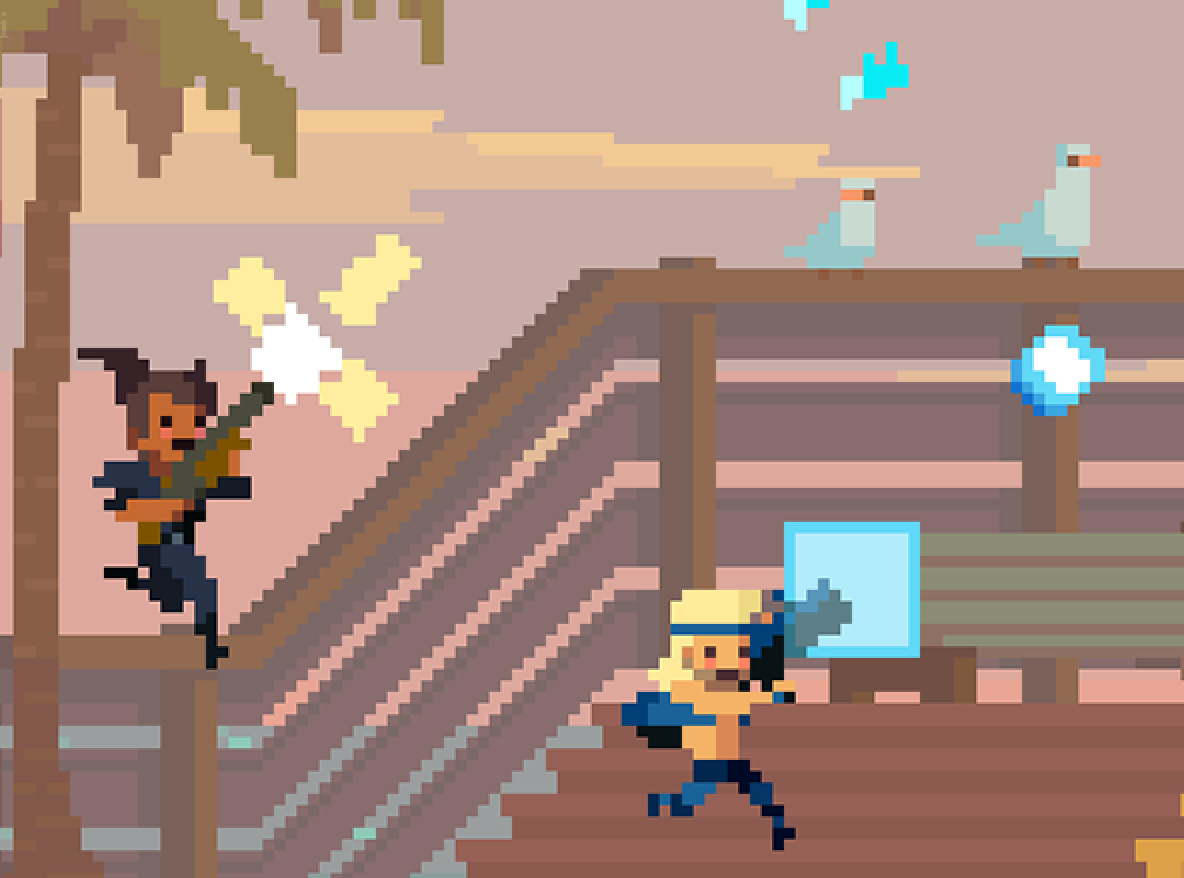 You'll use these heroes to travel through a side-scrolling, post-retro looking pixel world of dinosaurs, knights, "blounbots" and more and shooting everything in sight. The mechanics here are 16-bit tight — Super Time Force's controls are tight and very responsive, and Capy does a great job of building a visual vocabulary for the most part. I almost always knew where I could go and which way was the proverbial "up," despite some very complicated visuals and slavishly attentive animation.

This is particularly important in light of how unforgiving the worlds of Super Time Force are. Enemies might take several shots to kill, but one hit and your hero is toast. Collectibles often fly up into the air, but if they touch the ground, they shatter for good. And you're on a very strict timer that at first suggests that there's not a lot of time to screw around and explore.

But the time-travel conceit that Super Time Force is built on allows for the game's main mechanical point of differentiation — you can rewind time with the left trigger whenever you want to any point in the level that's already happened and spawn anew as any member of the squad. Alone, this would be a sort of ultimate spin on extra lives in a game, a chance to see where you screwed up and try again. But here's the wrinkle: when you roll back time, your previous lives play out in front of you, grabbing the same secrets, shooting the same enemies that they did when you played them.

The result seems like chaos at first glance, as squadmates shoot over one another, often dying in the same place because you died in the same place. But beneath the pandemonium there's calculated logic. I figured out that I could spend time on one life grabbing hidden collectibles and saving new characters. Then I could rewind all the way back and skip those sections, since my previous self would repeat my actions as pre-ordained for them. There are other inspired touches — if you can "save" a previous-playthrough teammate from death, often by killing their killer before they have a chance to do their killing, they become a time distorted power-up. Grabbing a character-as-power-up gives you additional hit points, but it also adds that character's charged shot to your own, making for one-person-armies if you play your cards right. 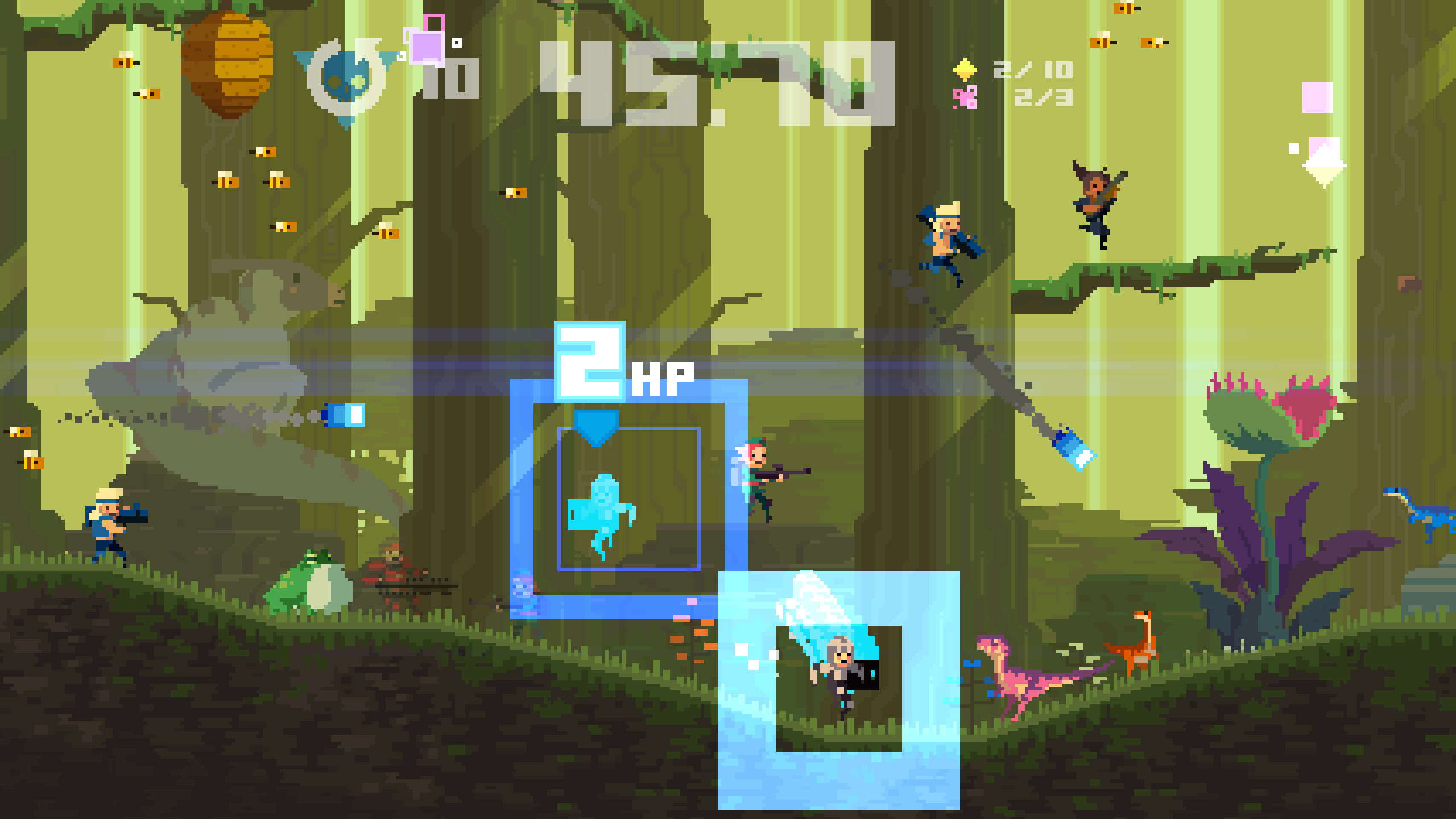 Last Gen vs Next Gen

Super Time force is releasing on both the Xbox One and the Xbox 360, but players who haven't made the jump to next gen shouldn't worry too much. The differences cosmetically are slight — the game runs at a lower framerate and resolution on 360 (don't hurt yourself laughing too hard at the second part), but is otherwise identical visually and mechanically. The Xbox One version does take advantage of the consoles GameDVR feature: hitting the "Y" button during end level replays will capture it for posterity and, if you choose, upload to Youtube, Onedrive, or Upload Studio.

Rewinding time isn't just a neat gimmick. Despite its shooter foundation, Super Time Force's draconian in-game clock makes it just as much of a speed-run, and the only way you'll clear some levels is to have several lives working together. I often had multiple characters clearing out obstacles and enemies to give one chosen avatar the chance to dive through with just enough time to successfully complete a level. All of these various bits of potential gameplay link to and reinforce one another, giving Super Time Force a singular feeling of cause and effect. I had no idea being the butterfly that flaps its wings and causes a natural disaster could be so satisfying.

This juggling of causality is even more mandatory for Super Time Force's bosses. Each of these often-massive enemies cannot be overcome by one soldier in the 60 seconds allotted, and there are no extra time pickups. These sections are fun but simple puzzles about compounding your firepower while learning enemy patterns early on, but later, things get more complicated, forcing you to defend and attack at the same time. There's a distinct learning curve in navigating this shift in logic at the drop of a hat, but results in some of the most satisfying, frantic boss fights I've played in a game in ages. Every fight in Super Time Force felt like an accomplishment, even when it was over in seconds in "real" time.

Super Time Force is the dumbest smart shooter around

Super Time Force is probably the dumbest smart shooter I've ever played. The face it wears is the goofy nostalgist that can't be serious for even a moment, sure. But Capy's implentation of time travel and control is inspired enough to shine new light on even its most tired-but-excellently-executed inspirations.