Harmonix explains why it can't make Amplitude without your help

Share All sharing options for: Harmonix explains why it can't make Amplitude without your help

Harmonix is attempting to crowdfund a follow-up to Amplitude, and in a lengthy blog post yesterday, the studio explained why it won't be able to make the game unless its Kickstarter campaign is successful.

"A bunch of you have been asking questions along the lines of, 'Hey, why does Harmonix need to do a Kickstarter? Isn't Harmonix rich from all of that Rock Band / Dance Central money? Can't you fund this yourselves?' The short answer is: nope," began John Drake, Harmonix's director of publishing and public relations.

At the end of 2010, Harmonix left parent company Viacom and became an independent developer again. Drake noted that the hundreds of millions of dollars that Viacom has paid to an entity called "Harmonix" didn't go to the studio itself; instead, the money was (rightly) paid to Harmonix's original shareholders, who backed the studio during the decade before it became successful with Guitar Hero and Rock Band. 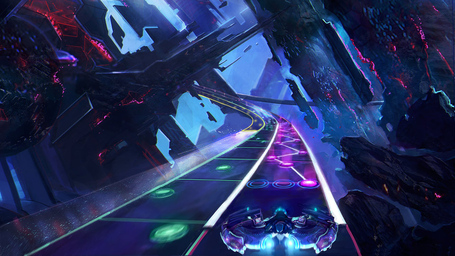 Amplitude may get a crowdfunded sequel from Harmonix called Amplitude

As an indie studio, Harmonix can only work from contract to contract if it wants to make make big AAA titles. Drake explained that the new Amplitude is a game that Harmonix is dying to make, but the studio can't afford to fund development on its own, and the company already exhausted its options for outside funding before it brought the game to Kickstarter.

Drake clarified that it's not like the Kickstarter funds would completely support the development of Amplitude. According to Harmonix, the campaign's goal of $775,000 is "less than half of the project budget for the game." If the campaign is successful, the money would allow Harmonix to self-fund the rest of development. And even with that plan, said Drake, the studio is risking more of its money "than [it] probably should." As for people who believe a company like Harmonix is too big to use Kickstarter, Drake said the studio believes that Kickstarter is for any project that couldn't be made otherwise.

"Make no mistake — without this Kickstarter, there's no clear path to getting Amplitude made or a clear scenario where we can afford to fund the team ourselves and release it. It's not a ploy — with the current landscape, without your support, this game won't exist," said Drake. If the campaign doesn't meet its goal, Harmonix will shelve Amplitude and reassign the developers who would have worked on it to a different project.

With a little over nine days to go in the 18-day Amplitude Kickstarter campaign, Harmonix has raised a little more than 30 percent of its $775,000 goal.