Share All sharing options for: Two Icelandic developers took me underground to discuss the future of VR

It was a good pitch from the folks at Aldin Dynamics: We’ll come get you, take you underground, and tell you why we’re going to change the face of virtual reality.

"Iceland is isolated, and in the 1990s it was like computers were black and white, and I got to this expo where my dad took me to see one of those older VR sets, and since then I’ve just been checking obsessively every year," Hrafn Thorri Thorisson, a co-founder of Aldin, said. He had also invited Callum Underwood, one of the people working in developer relations at Oculus VR. It was an interesting car full of people.

He tried to help me pronounce his first name a few times, but ultimately I gave up. He told me to call him Raven, which is the English translation. He also assured he that he’s a certified search and rescue worker, so if something went wrong underground, he’d know what to do. He was prepared.

He had also grown skeptical that VR was ever going to happen after that first taste of the technology back in the 90s. Most headsets released to consumers were bulky, uncomfortable and hard to use. They provided little to no sense of immersion.

"We’re gonna do VR full time," he said. "This is happening."

Every "good" headset was mostly kept in military hands and came with enormous price tags. When the Oculus was released they ordered a development kit just to see if someone had cracked that particular egg with a $300 product. It only took a few moments for Thorisson to realize their time had come. The headset arrived, and they tried it out.

"So we were like, yeah, we’re not gonna do anything else, we’re gonna do VR full time," he said. "This is happening."

Callum Underwood is a developer relations manager at Oculus VR, and he agreed to go underground as well; the invitation to discuss virtual reality, in Iceland, with two indie developers while driving along the countryside is hard to pass up.

It’s also possible Underwood was feeling a little rough from festivities the night before. I offered to bring something for his headache and we stopped for bottled water.

"So our background is in AI, doing both practical and academic work in game AI and other forms of AI," Gunnar Steinn Valgardsson, the other co-founder of Aldin, told us. "So, it was from there that we really wanted to make a game company that focused on that." He then mentioned that one of their early experiments in virtual reality was a demo called Trial of the Rift Drifter.

Underwood’s head snapped to attention. "That was YOU?" he asked.

This meeting, which may have begun as an excuse to do some sightseeing during a work trip, has suddenly become much more interesting.

A small number of independent developers went straight to work releasing tech demos and game play ideas once the Oculus Rift dev kits were released into the wild. Trial of the Rift Drifter was one of the earlier demos, but the game didn’t just allow you to look around a virtual environment, it tracked head movements for interaction.

You were judged by shadowy figures towering above you, and you have to crane your neck up to see them. Other figures peeked at you, and would cower when you turned to look at them. You could shake your head to say no, or nod to say yes.

These seem like simple things, but it was a demo that felt natural and real; the environment reacted to you in ways that didn’t require a controller. It was both well-designed and novel, and is still one of the more interesting things to play on the Rift. It didn’t make a big splash in the greater world, but in the virtual reality community it was passed around like a favorite mix tape.

In a way, we just found out we were riding with some of the underground stars of virtual reality.

"So we started out with just that core idea. The immersion-breaking factor is the keyboard. We thought OK, until there’s something like a kinetic interface for your hands, let’s just try and minimize the keyboard interaction so we don’t break the immersion," Thorisson explained.

"So our focus was on the question: How can we make the progression of the story be a part of feeling real, like a movie or watching something realistic on screen versus having interactions, minimalistic interactions that can really allow you to look around and feel immersed in your environment?" he continued.

"We really see VR as a new gaming medium, truly," Valgardsson  said. "The content will be specifically designed for that medium in comparison with other stuff."

This is about when we arrived at the cave. 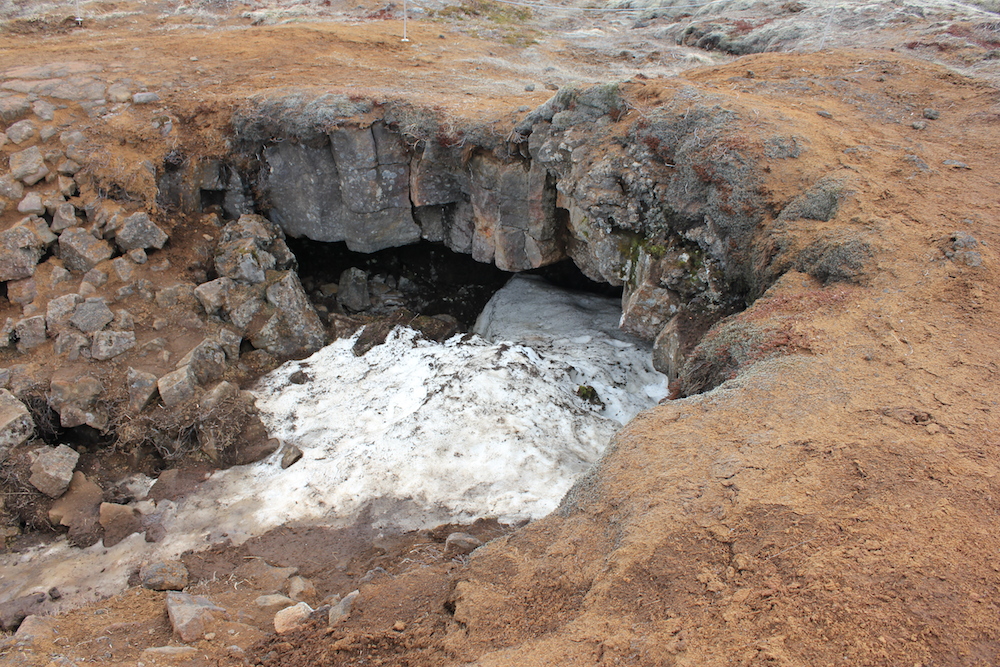 For a local attraction, there’s not much here. Just a roped off path over the rocks and moss, and suddenly there it is. The cave isn’t very grand from the outside, just a gash in the rock. Thorisson brought extra flashlights and reflective coats if we needed them, and inside we went.

It served as a good reminder of the power of actual experiences in the middle of a long conversation about making this sort of thing virtual. The cave was colder than the outside air, and water dripped from the ceiling. The droplets collected on the top of my head and would run down my back from time to time, sending a wave of chills up my spine. The cave even smelled interesting in that it was a rare environment that had an odor that felt both wet and clean.

There were moments where the passage was only a few feet high, and we had to crouch down to move further into the cave. I’m slightly claustrophobic, but only had to fight panic a few times when I felt the weight of the cave ceiling so close to my body when we crouched down to move ahead. Other visitors had traced their names on the calcium deposits on the walls. 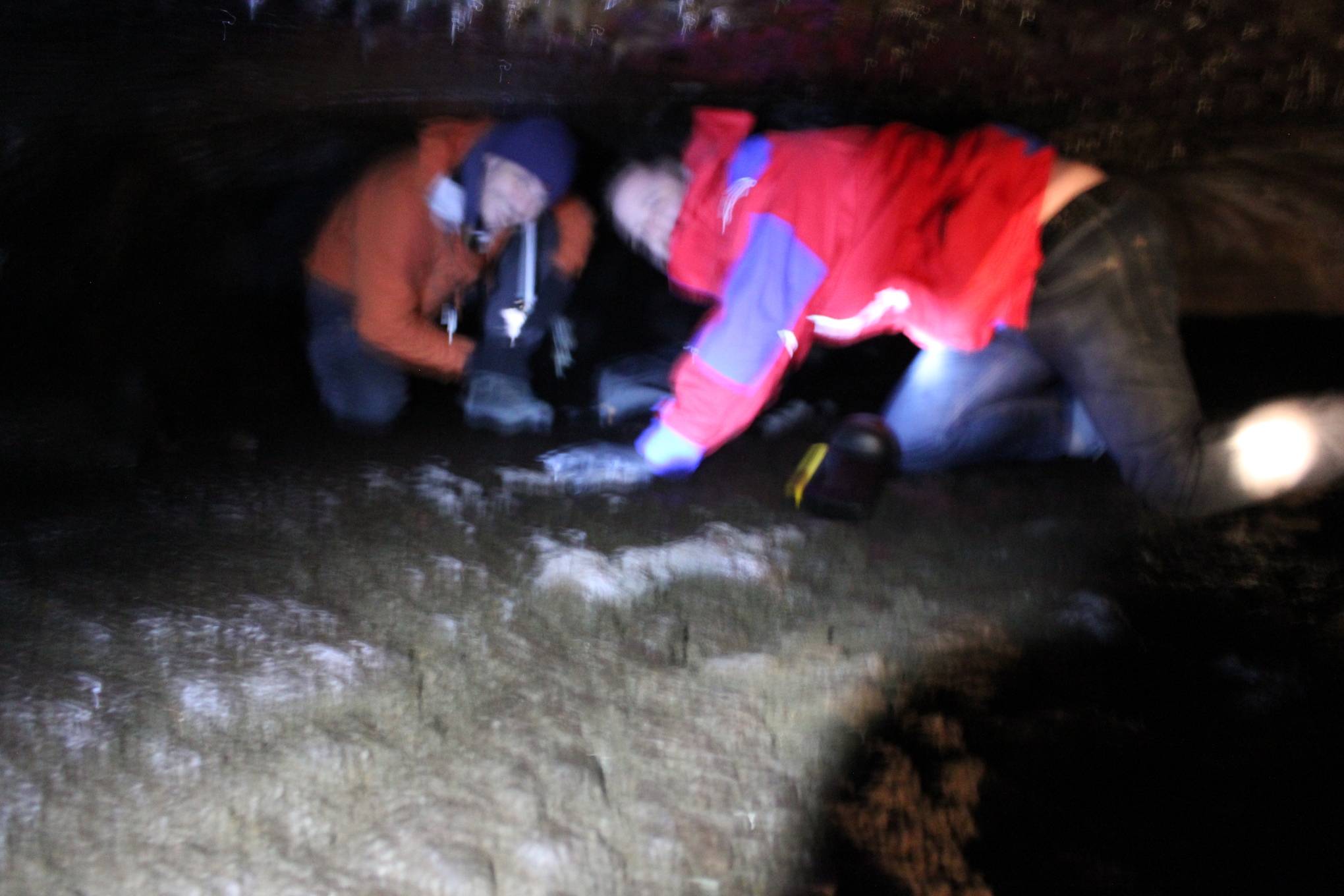 The effect was cumulative. We spent what seemed like an hour or so underground, and I was tired and ready for the fresh air when we finally turned around to head out. You could the patterns in the floor that showed how the lava cooled when the cave was created.

It's rare to get a chance to go to where developers live, to see what they do when they're not making games. Why does someone get into artificial intelligence, search and rescue and virtual reality? Our time inside the cave was oddly intense, filled mostly with grunts and soft curses as those of us not used to being underground hit our heads on the rocks above.

If you can only really know someone by fighting them, surely going underground with them is at least helpful in learning who they are.

We took a picture of ourselves on the way out. It was all business on the drive back.

A platform, not a peripheral

"We see [virtual reality] as an opportunity to reinvent the game experience," Thorisson explained on the drive back to the hotel. Their latest release is the first chapter of an episodic game called Asunder, and it’s a doozy. You’re seated in an old-timey plane, complete with newspaper and smoking characters. The user interface is invisible.

You look at things around the environment, and your hand moves if its something you can interact with. Other characters engage you when you meet their eyes with yours. It feels like a mixture of an adventure game and an interactive movie. It’s a short demo, but in terms of pure experience it’s one of the best-realized uses of the Rift. There may even be a jump scare or two.

They’re working on something much more grand, however, although both men refuse to give any details about the upcoming game. They’re looking for funding, and working with groups both inside and outside of Iceland.

"We have a lot of ideas that we really need to look into how are we going to implement, because it’s never been done before," Thorisson explained.

The goal is to avoid the "dead eyes" effect of games like Half Life, where the NPCs seemed more like animatronic robots at an amusement park than other human beings in the world. They want characters that know where you’re looking, and pay attention to your actions. They’re thinking about how to expand that experience using different input methods.

"And we actually suspect Oculus of working on something for input, but we’ll see," Thorisson said. Underwood, sitting next to me, takes pains not to react.

They’re shooting for a launch somewhere in the middle of 2015, and have built the company to create games in virtual reality. This isn’t a value add to their games, this is the reason they have a studio: To try to push the world of virtual reality forward.

It’s risky to go after a market that may not exist, but their early experiments have already shown their confidence and willingness to adapt to new ideas. If virtual reality is a dark room without many best practices, Aldin has been too busy lighting candles to complain about not seeing anything.

"I think that the developers that are in there right now should really take that role seriously. They are setting an example, and they are leading a charge," Valgardsson said.

"So, at least on our part, we take it really seriously that, whatever we might do well, whatever we might do badly, it could become an example that other people are going to follow. That’s why we’re also taking our time and thinking ahead and doing things right," he continued. "This is the chance for VR to succeed."