Transistor is not afraid to step out of the shadow of its famous sibling.

The latest from developer Supergiant Games, Transistor shares plenty of DNA with its predecessor, the popular indie game Bastion. Both are isometric action games, set in colorful, stylized worlds. Both emphasize combat. But Transistor's world and story feel unique. And its combat is fine-tuned, deep and dynamic.

Transistor put me in the shoes of Red, a gifted and popular musician living in the cyberpunk-fantasy city of Cloudbank. The game begins dramatically, with Red pulling a giant sword — the Transistor — from the body of a man on a rooftop. The Transistor isn't just a regular weapon, though; it has a personality and a voice, and it quickly becomes Red's partner.

The storytelling is fragmentary but effective, escalating the stakes with every twist. Cloudbank is a rich, beautiful place, brimming with detail and mystery. I scoured the world for clues at crime scenes and terminals that displayed the day's news or had personal messages for me — whatever details I could find to expand on the intriguing story. These collectibles aren't just passive bits of plot either; Transistor let me interact with many of these elements. I was able to leave comments on news stories, vote in polls, even order gourmet flatbread from an automated restaurant. These tiny details helped to flesh out the fanciful world of Cloudbank.

When I wasn't exploring abandoned corners of the city, I was fighting Process — robotic foes hell-bent on destroying Cloudbank. Combat occurs often, setting up a gameplay loop of explore-search-fight that kept things moving at all times. Upon meeting a set of enemies, a perimeter appears, boxing Red in and forcing her to fight.

Enemies always arrived in combinations, compelling me to deal with every encounter differently. "Bad cells" clustered around me, requiring a different approach than Snapshot robots that temporarily blinded me or giant "Jerks" that stomped around and bullied me. And each of these dozens of different enemy types leveled up as I did, keeping the challenge level consistent. 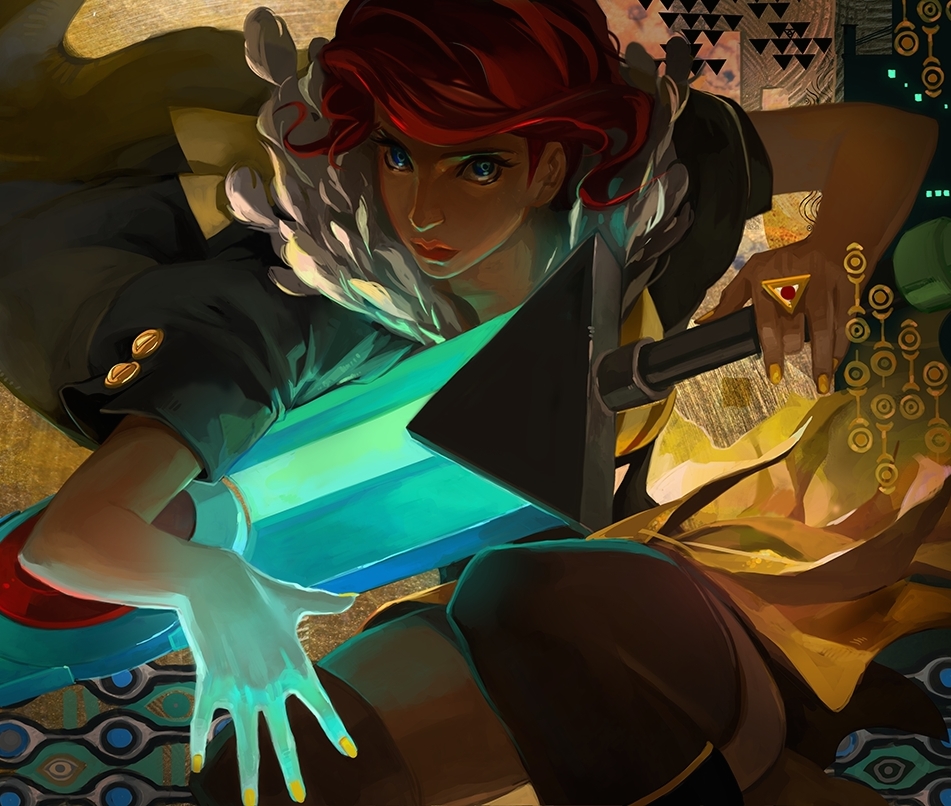 The game adjusted to my playstyle — for every fight, I could choose to attack the process in real-time, or I could choose to "load" a turn. Turns work a bit like, well, turn-based combat. During a turn, time froze, allowing me to maneuver and line up a number of attacks, then let fly and watch my plan unfold on the unsuspecting enemies. The cost was a cool down period where I was powerless for a few seconds afterward. So, I could stop time, wale on an enemy that was shielding a Jerk, smack the bigger baddie with a heavy melee attack and run out of the way — but I'd be basically helpless for a few seconds after that. I had to think several moves ahead, and keep changing tactics as new enemies unveiled their tricks and weaknesses.

I personally mixed real-time attacks for support enemies (foes that created shields or replenished health for the other enemies) and turns for the stronger or more dynamic enemies, and the game supported this decision all the way. I loved having the freedom to decide how I wanted to treat each battle — and that freedom extended to weapon selection and customization as well.

I started out with two abilities — functions, in the game's parlance — a quick melee attack that could be charged, and a ranged shot. Those original choices were soon complemented by new functions, such as a warp that let me zip across the battlefield, a trap that damages foes within a small radius, a beam that bounces from enemy to enemy, and so on. 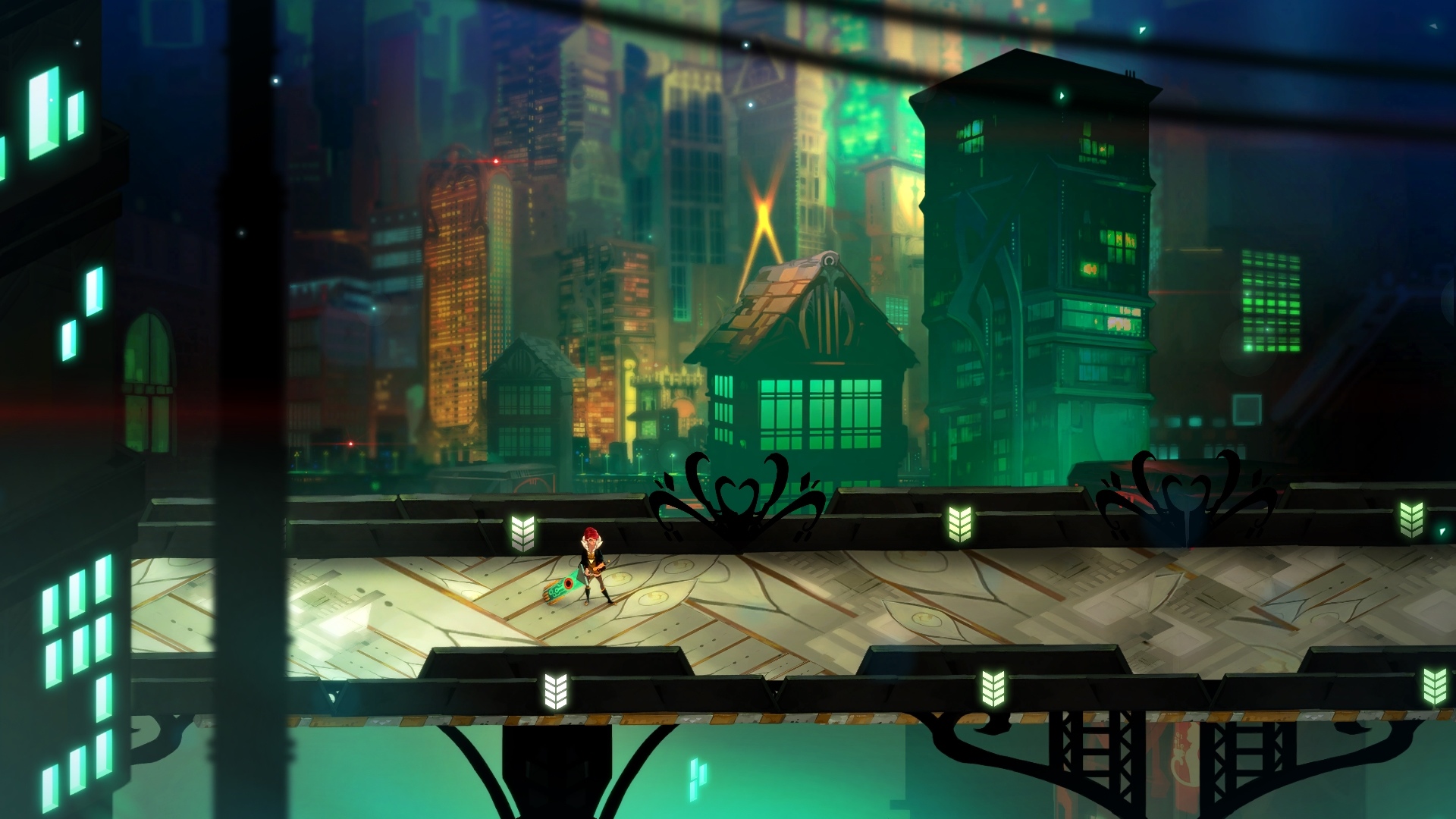 As beautiful and evocative as the visuals in Transistor are, it's the game's use of music and voice acting that set it apart aesthetically. The music itself is fantastic — and Red's status as a musician actually ties into the gameplay at times. Logan Cunningham's voice acting is excellent as well, infusing the Transistor with personality and life.

Between the core functions and the ability to mix functions together into passive add-ons, there were dozens of possibilities for loadouts. I could make a melee attack more powerful, for example, by equipping it with a drain ability. Or, I could add a charm function to my warp, and turn enemies to my side for a few seconds as I flung by them on the field. I felt like a pugilistic mad scientist, mixing function combinations and taking them to the battlefield. There isn't a dud in the bunch — every loadout worked beautifully, encouraging experimentation.

It's a good thing too, because Transistor's unconventional means of punishing poor performance meant I sometimes had to do without my favorite combinations. Instead of killing me when my health bar bottomed out, Transistor took away one of my functions. So long as I had an active function working, I could finish the fight. I always recovered my powers, after hitting a prescribed save point. But I had to make do with my compromised abilities until then.

All of the moving parts create a system that is complex and layered but harmonious. I couldn't get enough of the combat in the game, opting to play "practice" fights and tests in the game's version of a break room whenever I could. Upon reaching the story's ending, I eagerly loaded the game back up and started the robust new game-plus with all my favorite functions equipped, ready for more.

The game's combat is so good that it actually overshadowed the story for me — something I didn't expect, given the fascinating characters, world and premise. I loved Red, with her feisty personality — she fights her way through the story with a keen sense of determination. And the Transistor was as good a companion as I could ask for. His advice and chatty nature made him a welcome presence for the duration of the adventure. Ultimately, the worldbuilding and passive storytelling elements held more weight for me than the narrative itself — which ended on a note that was more "what just happened" than it was emotionally satisfying.

Transistor may look like another pretty face favoring style over substance. It’s oozing with style and aesthetic charm, and it drew me into its weird and wonderful world immediately. But its beauty is outshined by combat deep enough to sink into for hours and hours. The game’s vision is intoxicating, and its execution is inspired.