The New Order's humanity makes it something truly memorable

Wolfenstein: The New Order is the product of an unexpected marriage.

On one side, there's Wolfenstein, id Software's oldest franchise, which came before Doom to define an era of first-person shooters. On the other side is new developer Machine Games. Composed of veterans of the studio Starbreeze, responsible for 2004's sleeper hit The Chronicles of Riddick: Escape from Butcher Bay and 2007's The Darkness, their games are known for strong narratives and effective characterization.

The result is a game at the mercies of both old-school blast-em-up first-person shooters and the storytelling ambitions of its new stewards. It shouldn't work. Numerous other shooters have tried and failed.

But Wolfenstein: The New Order doesn't fail. Its bizarre love triangle of traditional shooter elements, sci-fi pulp and believable human angle becomes something much more than its origins would suggest.

Wolfenstein: The New Order is a direct sequel to 2009's Wolfenstein, which followed 2002's Return to Castle Wolfenstein. The series has established a fully alternate timeline of World War II: Using ancient technology powered by occult energy, the Nazi war machine has gained a seemingly insurmountable edge and set the Allies to heel.

The New Order opens in the sky over a German castle in 1946, as series mainstay B.J. Blazkowicz leads a last-ditch mission to take down Wilhelm "Deathshead" Strasse. Last seen crawling from the wreckage of a zeppelin in Wolfenstein, Deathshead is the Reich's lead scientist and strategist of its dark plans for the world. The Allies believe that with Deathshead gone, Germany's war machine will falter.

During an attempted escape, Blazkowicz is rendered a comatose John Doe for more than a decade. He finally regains consciousness in a Polish asylum to a waking nightmare: The war is over. The Nazis have won. The world — and more — is theirs. With some unlikely allies, Blazkowicz sets out to find the resistance and save what's left. 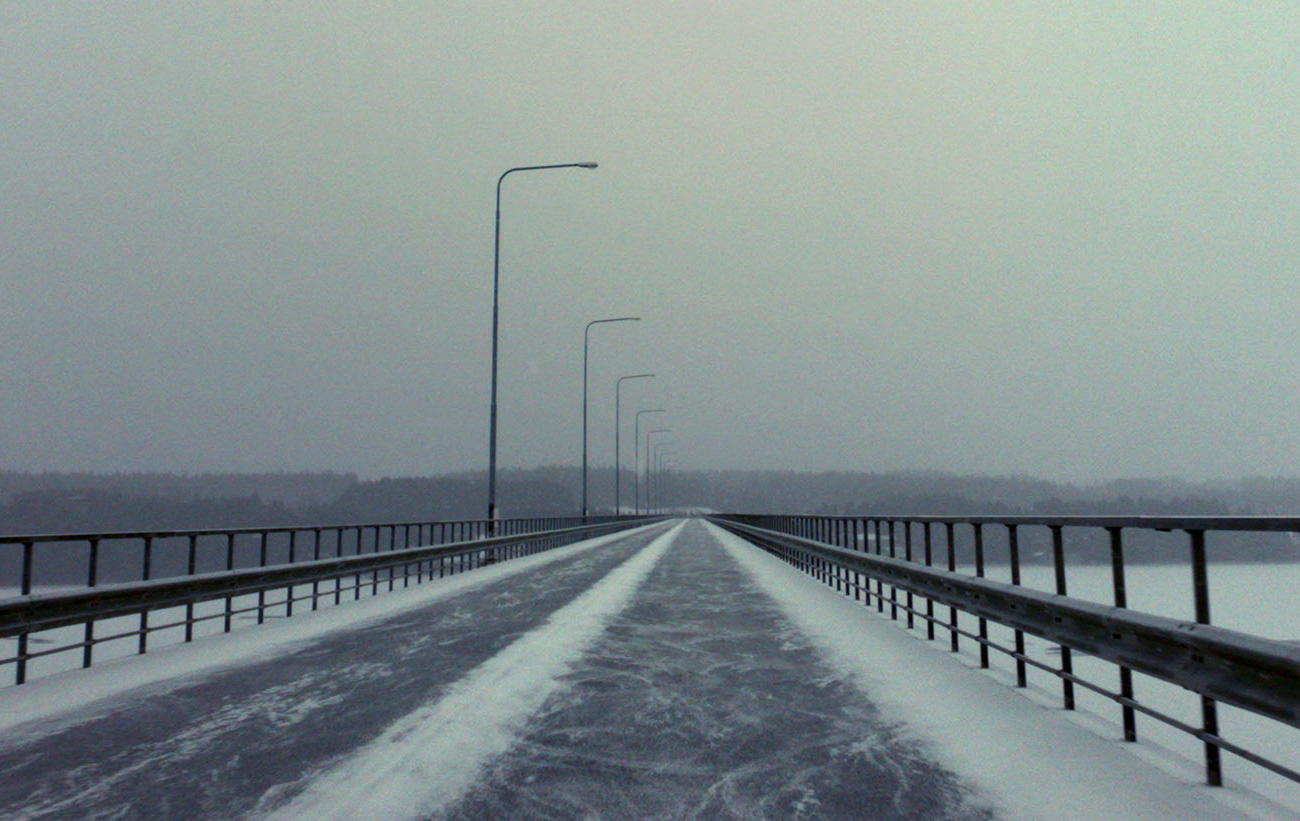 Excerpt: A Fight Club On Top of the World

"I don't want to make this sound like PR-speak, but I think the biggest strength this studio has is the history of the directors and the kind of games they've made," says Andreas Öjerfors, senior gameplay designer on Wolfenstein: The New Order. "The focus they have on two things — the narrative-driven experience, and the gunplay. Those are the two strongest things we have going for us. I think we've made a game about those things."

Öjerfors started at Machine in 2011, when the tools to build Wolfenstein were still in development, and Machine was still getting its feet wet with the id Tech 5 engine. He had been at Funcom. He worked on the MMO Age of Conan, among other games, mostly writing narrative quests.

"We have a narrative-driven game," he says. "It's about the setting, the alternate history setting. It's about combat and the physical sensation of being in [protagonist] BJ's shoes and fighting a force of Nazis. Those two things are the strongest parts of our game. I think that's basically because of the history of the directors."

Read more about the creation of Wolfenstein: The New Order and developer Machine Games 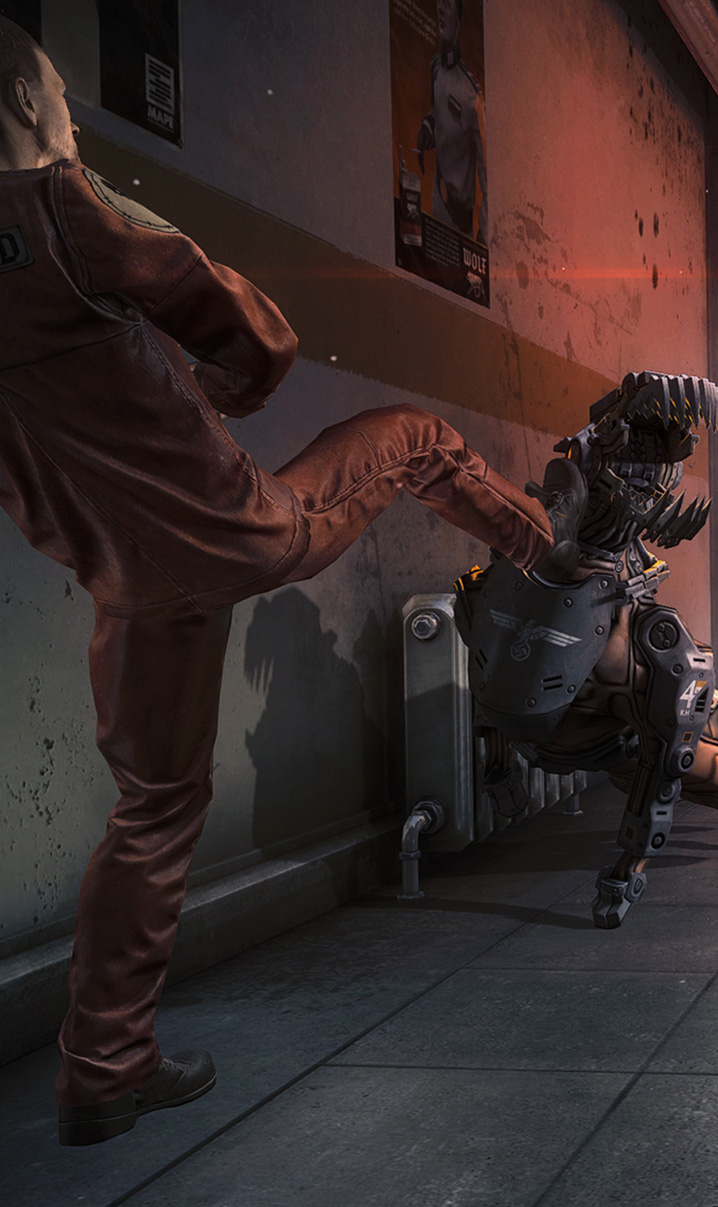 The "what's left" in question is one of Wolfenstein: The New Order's strongest elements. Machine Games has created a wonderfully realized retro sci-fi world. It's full of monochromatic CRTs and space-race-era speculative futurism — aspirational rocket art mixed with Nazi propaganda. This is, appropriately, at turns both humorously absurd and horrifying at any given moment, making for a surreal fiction that Machine Games pulled me right inside. It's strong, consistent with its own logic, and clever in the way that it plays with historical events and expectations.

Everything is nudged or yanked in a different direction by the Reich's world domination. Occasionally it's mined for laughs, like western pop music of the '60s gone in a fascist direction. But more often it paints a darker picture, depicting a world in which the final solution is a matter of course, its machinery grinding to its inevitable conclusion across the world, not just Europe. And in this, once again, Machine Games surprises — The New Order focuses more on the civilian cost of war, of Nazism, than any game I've ever played.

Machine Games isn't content to offer a more civilian-rooted view of a Nazi occupation — The New Order also takes a stab at Western racism that goes beyond "the Nazis were evil," drawing a direct line between the Third Reich and the United States' ugly history of slavery, Jim Crow and segregation.

It succeeds at this in part because of the diversity in representation that Machine Games establishes. There are strong women at the heart of the resistance, and people of color are present with clear voices, their own stories to tell and their own anger and criticisms to level at Blazkowicz and the country he once fought for.

There's a wide spectrum of human life and suffering on display, beyond the often — and often overly — excessive violence. From doctors weeping at their own complicity as they're forced to sign away "subhuman" patients, to German missionaries horrified at the eradication of indigenous peoples around the world; the Polish grandmother who sobs as she tears at the uniform of a Nazi captain, and the African resistance fighter trapped in a Croatian work camp. Machine Games seems invested in shoving human collateral damage right in front of the now almost quaint Nazi-shoot-em-up that Wolfenstein began as.

That dramatic depiction of the cost of violence seems at first to sit awkwardly with the decidedly old-school shooting The New Order is built on. The two-weapon, health-recharging dynamic that's dominated shooters for more than a decade is absent. Instead, Machine Games takes Wolfenstein back to its roots, slowly giving you an arsenal, with nearly every weapon available for dual wielding and with alternate fire modes. Figuring out which weapon to use at any given moment in the various combat situations The New Order presents is a big part of the puzzle. Health is restored via health kits; armor pickups are vital — absent the fact that health will recharge to the nearest multiple of 20, it can feel like 1992 all over again.

Of course, there are some considerations given to modern audiences. First, stealth is a valid option for extended portions of the game, with silent melee takedowns and a brutally effective suppressed pistol. There's also a form of progression in Wolfenstein: The New Order's perk system. Performing certain actions in combat unlocks new abilities and upgrades over time, which can make a significant difference in the way you can tackle firefights. You can also find weapon upgrades that further escalate the raw, over-the-top violence on display. 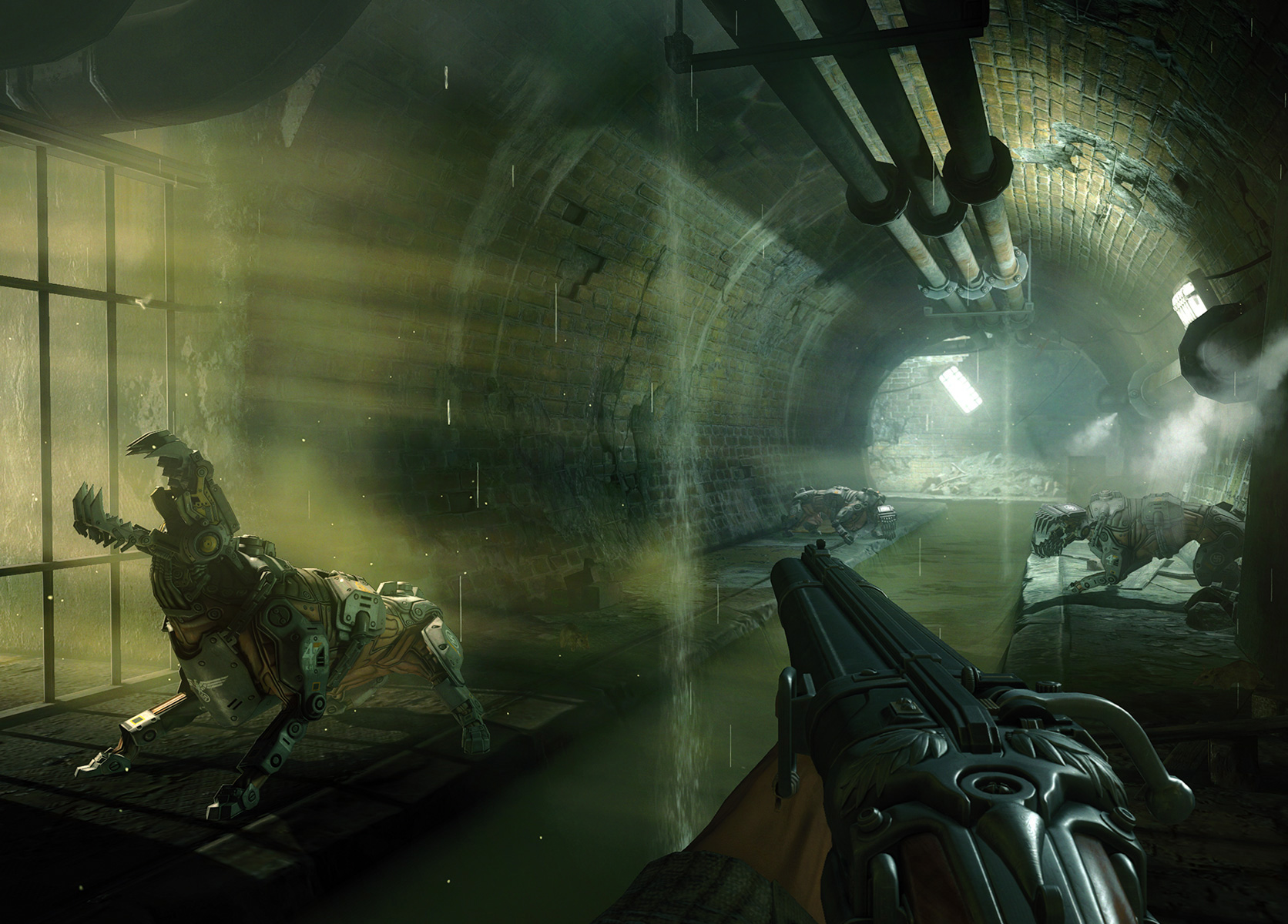 It wouldn't be a Wolfenstein game without secrets, and in that respect, The New Order continues tradition. There are hidden chambers throughout the game: Some are activated by a simple switch, like, say, pulling a knight's sword, and others require a more complicated set of entry requirements. These hide several kinds of collectibles, from useless treasures to pieces of codes that can eventually be solved to unlock new game modes.

These secrets also tie into The New Order's dual-timeline mechanic, which is determined by an early life-and-death choice. Your decision determines some major character-related moments, but it also assigns you either the ability to pick locks or hotwire electronics. Either way, you won't be able to find every secret on your first playthrough of an already 12- to 15-hour game.

This combination of old ideas and new hooks seems mismatched, but I was taken aback by how well it all worked together. As a stealth-inclined player, I was happy to learn that I had the space and equipment to focus on that more often than not. And when I was forced to engage in direct combat, I still had everything I needed to get the job done. The New Order finds a reasonable balance between presenting enemies that don't feel like fodder without getting in the way of its own narrative momentum and world-building.

Except for the boss fights.

Where I enjoyed the combat flexibility The New Order presented me elsewhere, its larger "event" battles were often retrograde to its momentum. I enjoyed a couple of them, and in one, I even felt smart. But these are mostly trial-and-error collections of death followed by another try, and were easily the primary source of frustration in the game.

Despite that issue, Machine Games roots its often arcade-like missions within its world thanks to the strength of its fiction and, even more so, its characters. The body count is comically high, but it's all punctuated by desperation — when the Nazis rule the world, what does a few dozen dead troops mean? The fight for hope, to maintain it amidst a nightmare, is everywhere.

There are multiple, complicated relationships at play. These aren't standard hoo-rah cheerleaders, either — there's a real sense of pain and loss, confusion and struggle depicted by the resistance Blazkowicz becomes involved in. And despite some corny ideas here and there and some laugh-out-loud moments, I found myself emotionally invested in The New Order's cast. They make the almost Bond-ian plot that skips across Europe and beyond feel urgent and necessary.

The New Order's humanity makes it something truly memorable

The New Order's got all the workings of a classic shooter. But in their trip back to the well, Machine Games has brought all of its talents to bear. The New Order is held together, even rocketed beyond the basic sum of its smart levels and effective mechanics, by its characters. That humanity takes what would be a good shooter and makes it something truly memorable.

Wolfentstein: The New Order was reviewed using retail PS4 and Xbox One copies provided by Bethesda. You can find additional information about Polygon's ethics policy here.