According to the lore, EA Sports once wanted nothing to do with the UFC. This was, comparatively speaking, eons ago in video games — like a decade or something. UFC president Dana White, ever the fight promoter, punched up with that storyline when his mixed martial arts series was aligned with THQ.

Matters are starkly different today. THQ is no more. Electronic Arts' CEO is the former EA Sports boss, and also is a guy who has trained in Brazilian jiu-jitsu with its most notable practitioners, the Gracies. EA has been very, very interested in mixed martial arts since 2010, enough that it entered the market with a game based on what was essentially a minor-league MMA circuit. When exclusive licenses on the UFC and Major League Baseball became available in 2012, it was no surprise which one ended up in the hands of sports video gaming's dominant publisher.

And Dana White, ever the fight promoter, now has nothing but good things to say about his new partners, who figure to make his series a good chunk of money with the next-gen only EA Sports UFC when it arrives the week after E3.

EA Sports and the UFC may have been an unhappy couple in those first years, but ultimately they found each other, and the video game they're making looks like a June celebration that was worth the wait. EA Sports UFC shows off a high degree of polish, in its presentation, its menus and especially in the animations I saw during three fights with the series' creative director, Brian Hayes.

Plenty has been written already about how flesh ripples when a foot slams into someone's midsection, or how a fighter's toes actually spread as he becomes set in his fighting posture. These are not things you're inclined to notice when you're afraid of getting the crap kicked out of you by a guy who made the game.

Once upon a time, they wanted nothing to do with each other.

What I did notice throughout was a sensible use of momentum from punch to kick to movement that, in the long run, required me to think strategically about my strike combinations. If I threw an unreasonable number of strikes in other MMA games, they would step in to artificially reduce their effectiveness according to a stamina rating. In EA Sports UFC, the game's natural animation of moving from, say a roundhouse kick to a body blow from the opposite hand, if you're panicking and keying in those strikes, reduces the effectiveness of such a combination on its own.

Strike commands in EA Sports UFC are on the face buttons, effectively settling the debate over where that control belongs in video game MMA. THQ's UFC Undisputed series had them on buttons; 2010's EA Sports MMA put them on the right analog stick to be consistent with the label's Fight Night boxing series. With buttons, there's no uncertainty as to what limb is supposed to be hitting the other guy. If you start whaling on the B (or circle) to kick when your opponent closes in, though, you'll have to wait until the animation finishes. If you hold down the bumper modifier to perform a power attack, it'll take longer. This is especially true in heavier classes, where strikes connect with more force but take a lot of time and energy to execute. That said, I did feel like I could naturally interrupt the extra strikes I'd keyed in out of nervousness, either by moving my fighter on the left analog stick or applying the right trigger, which is always a defensive command.

The end result is that the complexity of a strike is going to be more of a brake on throwing ridiculous combinations than artificial things like energy bars or stamina ratings. Those still figure into the game, though. Hayes praised me for keeping my guard up and not winging punches indiscriminately, and in the fourth round of our first fight I had enough juice to knee him in the head a few times and initiate a takedown.

With the face buttons given to strikes, the right thumbstick is what keys a clinch or a takedown, a pass to a more dominant position in either phase, or a submission maneuver. THQ's game struggled back and forth with the concept of using major and minor transitions in grappling; EA Sports UFC discards that for two commands, a quarter turn left or right on the right analog stick to improve your fighter's position on that side. (Or, pushing straight up to straddle your opponent and start raining down the blows.) 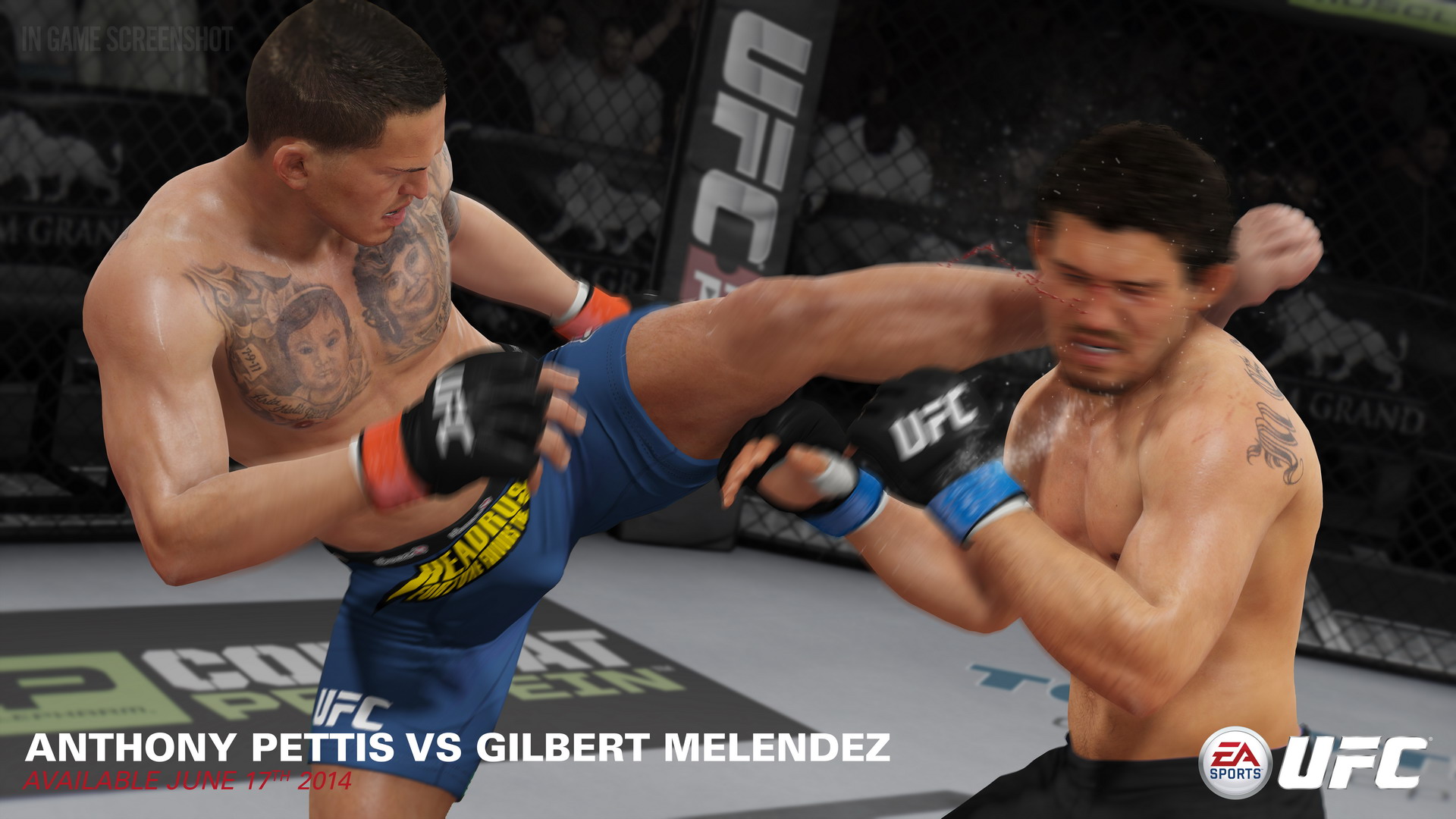 Defending against transitions (or thwarting escapes) requires a player to pay close attention to his opponent's shoulders and hips, and when he moves in a certain direction, counter it with a gesture to the same direction on the stick. This takes a lot of focus, but the direction to counter is relative to the screen, not the way your fighter is facing. Also, the fight camera maintains a reasonable distance, keeps the referee out of the way (which had been a real problem in EA Sports MMA and Fight Night Champion) and, important for multiplayer matches, does a good job of continually rotating to keep players on their natural sides of the screen at all times.

Hayes quickly choked me out when it came time to show what submissions look — and feel — like. In its lifespan on high definition consoles, the MMA submission game has been the most inconsistent command set, game-over-game. EA Sports UFC introduces another new minigame to enforce submissions, and while its logic is apparent it still appears to be one from which a lesser fighter can frequently escape, especially against a human opponent.

When a hold is applied, the submitted fighter may push his stick in one of four directions to escape. As soon as his opponent sees the direction he is pushing (called out on the screen), he can counter it by pressing in the same direction on the right stick. To advance the submission hold, the screen will provide cues for the controlling fighter to flick on the left stick. Completing them resets whatever progress the submitted fighter may have made toward escaping, and ultimately forces him to tap out.

Hayes said this was meant to represent the different stages a fighter must go through to perform, say, an armbar or the dreaded rear naked choke. (There are more than two dozen different submission holds in the game, though each fighter is capable of performing only a few.) It's a lot of information to take in, and newcomers should not expect their first submission attempts to go well.

As THQ's UFC game changed controls throughout its three editions, and EA Sports MMA added a fourth variant, EA Sports UFC represents a fifth attempt at trying to consistently apply intuitive fighting commands across MMA's three phases: standup, clinch and ground. Big picture, it all seems to work. The basic save-your-ass stuff is consistent throughout: Right trigger always is a defensive command, warding off takedown attempts, allowing fighters to slip punches (when combined with left stick movement) and, combined with a button, blocking and parrying high or low. Yet with strike commands on the buttons, players who want to punch out of a high guard or parry will need a lot of practice dropping and raising their defense enough to slip in a fast strike, and bumper-modified power strikes will take extra work.

EA Sports UFC's demanding gameplay will carry through a slew of offline and online modes, including a career that incorporates elements from the UFC's Ultimate Fighter reality show. Online, players can participate in 10-match "seasons" similar to FIFA. An offshoot "rivalry" mode from this allows individual players to stage a series of bouts, tracking their performances and statistics.

Sports video games' first breakthrough title during the last transition in console generations was Fight Night Round 3 on the Xbox 360. Combat sports like boxing and MMA are uniquely positioned to new hardware strengths; the intimacy of the action shows off the enhanced visual fidelity, and artificial intelligence is easier to handle in a one-on-one matchup. EA Sports UFC looks to be a solidly built fighter that exploits the natural advantages set before it. It'll take more time to judge the balance of the game's three phases, particularly with regard to applying and completing submission holds. At first blush, though, it shows an understandable gameplay structure that makes a fair fight out of a spectacle where almost anything goes.

The Lord of the Rings: The Rings of Power’s NYCC season finale trailer reveals Sauron

Hulu’s Hellraiser, Werewolf by Night, and every other movie you can stream from home this weekend

Overwatch 2 bug is forcing some players into accidentally buying skins

The Rings of Power is holding Galadriel back