SpyParty's cast of spies and partygoers expands with a greater diversity

Share All sharing options for: SpyParty's cast of spies and partygoers expands with a greater diversity

The cast of Chris Hecker's SpyParty, the subtle game of wits between two players assuming the roles of sniper and spy, is growing with the addition of five new characters.

It's an important milestone, Hecker said, because the game will now have 10 playable characters — half the planned final number — that reflect the game's new visual style. That means SpyParty players can soon play real competitive matches in the new style. And that means SpyParty is one step closer to release.

SpyParty's completion — if it can ever be complete — has been a long time coming. The game has been in beta for years, its developer carefully tuning its mechanics while continuing to add new gameplay modes. It's also been getting a top to bottom visual overhaul: new character models, new animations, new levels.

With the game's latest visual update — the new characters revealed today are all real, actual in-game models — Hecker and Cimino are showing off a greater level diversity in its cast.

"we actively think about a lot of different axes of diversity, including race, gender, age, ability, and body shape"

"I really want SpyParty to be the most diverse game ever in terms of the kinds of playable characters it presents," Hecker said in an email. "When we're concepting and building characters, we actively think about a lot of different axes of diversity, including race, gender, age, ability and body shape.

"We don't worry about sexual orientation in the character model art, because that's actually a mechanic in the game already with the Seduce Target mission! The only kind of diversity we consciously aren't playing with is class/income diversity; since the game is at a fancy high society cocktail party, that axis doesn't really make sense, but we hope to explore the others as fully as we can in 20 characters."

One of the new characters, Mr. I, represents potentially the biggest shift in SpyParty character design.

"I knew I always wanted to [have] a person in a wheelchair," Hecker said. In addition to bringing a dash of diversity, he explained, "There's very few other games where you could play someone in a wheelchair that is just as powerful as the Marine-looking dude with the shaved head.

"SpyParty's pretty unique in the way that ... an older woman and a guy with a cane ... those characters can all be just as effective a spy as the James Bond-looking guy. So, I definitely wanted to do a person in a wheelchair, even though it's going to be a little bit insane, code-wise."

Editor markup for SpyParty screenshots. This is only visible in the story editor.

SpyParty's wheelchair-using character will present something of a challenge for Hecker to program. The movement and speed with which other characters mingle in SpyParty won't be applicable to the seated player character. But, Hecker says, the character presents new strategic opportunities for players who choose him based on his height and the way he moves.

Hecker says the character who uses a wheelchair might be at a slight psychological disadvantage, however, because he looks like "a douchey dot com billionaire."

"The turtleneck is totally gonna get him shot," he said. "You hate him already just looking at him."

The diversity in partygoers in SpyParty extends beyond just differing levels of abilities and race, though the latest batch introduces its first Asian and its second black character. A range of ages and body types are important to reflect as well, Hecker said.

But personality and a desire to squeeze certain character types into the game, it seems, trumps most of that. The older woman that SpyParty is adding, accessorized with a flowery hat and a teacup Yorkie in her handbag, not only presents a unique shape, it checks one of Hecker's personal boxes.

"I really wanted a purse dog in the game, just 'cause it's so absurd," he said. Hecker is still on the fence about whether snipers will be able to shoot the dog.

SpyParty's new Asian character, Ms. F, who is based on Cimino's real-life girlfriend Alice, sports a "just came in from the polo match," Hecker said. The new general, Mr. G, is the first character to directly replace one of SpyParty's older, low detail models. And the fifth new character, a 40-something businesswoman called Ms. H, is the game's most detailed, thanks to her hair.

"SpyParty characters are about 12,000 triangles or so," Hecker explained. "Ms. H's hair has 23,767 triangles in it, so there are two full characters' worth of triangles in her hair alone. It's also rigged, so it has a skeleton inside it so it can move plausibly while she talks. It's worth it because it looks so awesome, and really makes her silhouette distinct."

The design of SpyParty's expanding cast goes beyond their visual representation. Their design will be reflected in how they are expected to behave in game, Hecker said, thanks to a mechanic called dossiers. In SpyParty, dossiers define how characters might interact with other characters, how they move through a party atmosphere and how they might drink.

"So, for example, the general drinks too much and always chases skirts," Hecker said, "meaning 99 percent of the time he'll take a drink if he's offered one, and he'll call the waiter over as often as he can. And he'll always try and be next to a female character in the conversation.

"The guy in the wheelchair attracts [and] mostly wants to speak to older people," Hecker said. "But he turns people off and so people tend to leave conversations with him. You can imagine a whole bunch of different categories of characteristics."

That's the type of behavior players will be expected to match if they want to blend in in SpyParty. Expert sniper players will have these characteristics in mind as they observe the party, and expert spies will know what movements or behaviors might give them away.

"You're gonna have to actually need to learn this stuff at the elite levels, kind of like how you need to learn the characters in League of Legends," Hecker said. "Originally, I was terrified of the dossiers idea. You want backstories to these characters early on, and then I chickened out. I was like, 'Oh there's just no way, it's too much homework.' 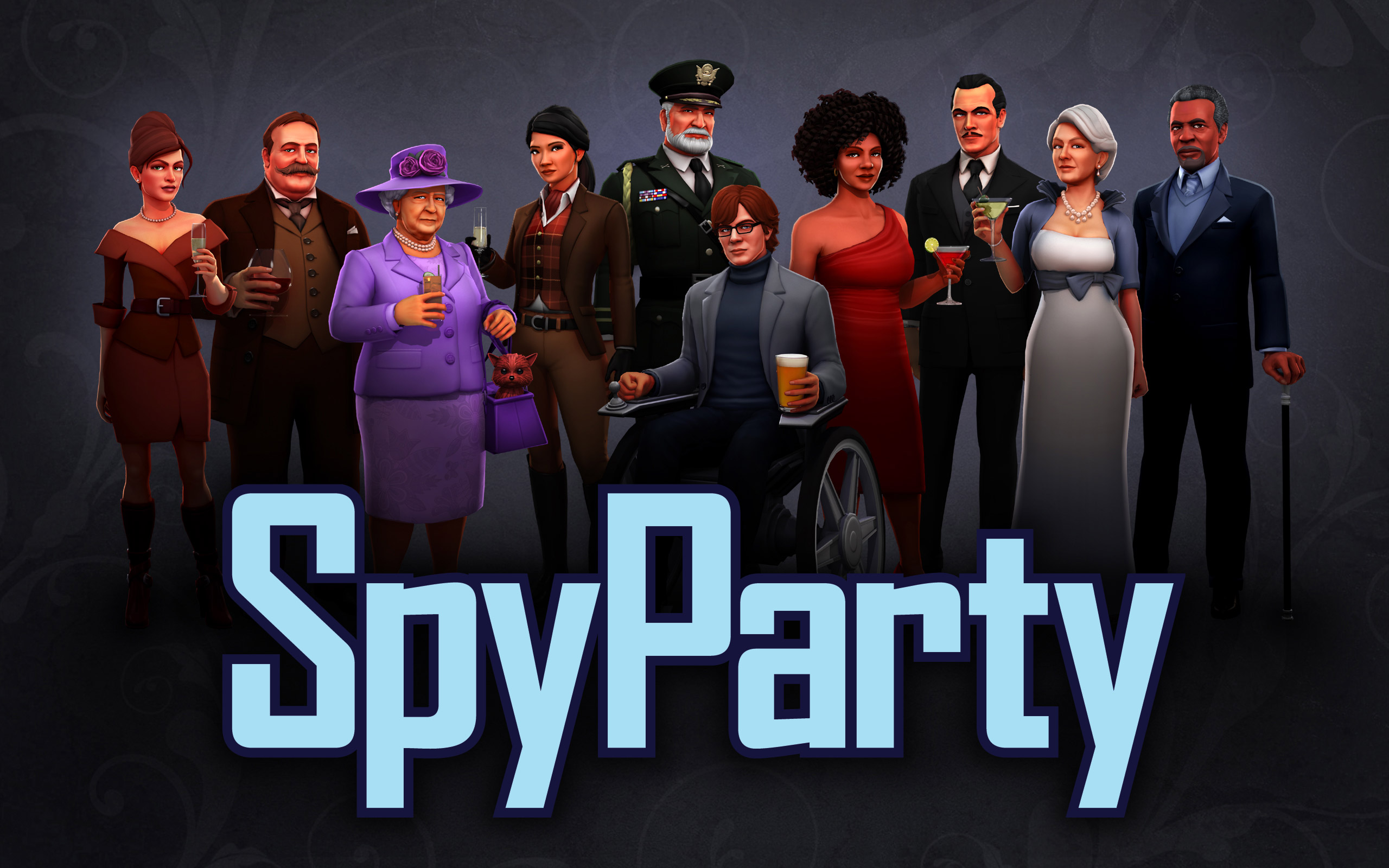 "But League of Legends and Dota, and to some extent Street Fighter, you have to learn the movesets and things like that. There's a lot of homework associated with these really high-level games. And I started to build up some confidence. That level of complexity, as long as it's opt in, is actually good. I was just afraid that it was just gonna be way too much, learning the ins and outs of 20 characters. But League of Legends and Dota have hundreds of characters and people study those. And so I think it will add a really interesting bit of depth."

Attendees of this year's PAX Prime, where SpyParty is frequently on display, will get a crack at the new characters in action. The goal, Hecker said, is to have all 10 characters playable in one of the game's new maps, giving SpyParty players a clearer look at what the competitive game will ultimately be.

"So this will start moving the game, now that we have enough characters to actually be the game we want it to be in the long run."