Sniper Elite 3 is all about getting the perfect killshot. Here, you must be calm, collected and quiet to be deadly — at least, when it comes to soloing missions. With co-operative play, it's a different story.

Sniper Elite 3 continues the story of sniper Karl Fairburne during World War II in the rarely explored setting of Africa. Players have the option to explore the game's main campaign on their own or team up with a friend. During a recent demo of the game, I tested out Sniper Elite 3's Overwatch and Survival options.

Overwatch returns from Sniper Elite V2. Like its previous form, Overwatch is a special set of missions players take on with friends. Players set themselves as either a sniper or operative on the ground and are restricted in their weapons and items to provide a complimentary experience. As a sniper, I lost access to my binoculars for spotting and marking far-off targets. My partner, who acted as the game's operative on the ground, was essentially the bait. Bereft of his sniper rifle, it was his job to unlock doors, blow things up and generally draw enemy attention. This freed me up to pick off enemies as they approached.

Rebellion head of creative Tim Jones told Polygon this method was to encourage tactical play between teammates. Calling Sniper Elite 3 "the smart man's shooter," he explained that players have to work together better to be successful. If one player dies, the mission is over.

"It really enforces a kind of meaningful teamplay on a mission," Jones said.

Swapping roles put pressure on me and my teammate in different ways. While he worked to clear out targets on the ground, I fretted about keeping him alive. If I spent too much time being inattentive, enemies could overwhelm him. This was tricky to get down at first — resulting in the repeated death of my partner — but the game's new multiplayer checkpoints kept each setback from feeling hopeless. 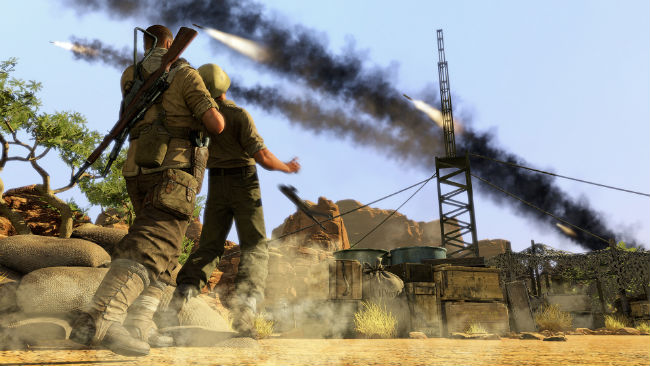 Survival mode felt more like a typical co-op experience, one that Jones describes as "relatively straightforward." My partner and I battled waves of enemies while attempting to stay alive as long as possible. Enemies filtered in from around the map, and killing targets in a marked zone won us higher scores.

Although each of us were given full access to equipment, we worked best together when we were flanking enemies or covering each other's backs. If one of us strayed too far and was seriously injured, it became a race to find and revive them. The game "gets tough pretty quickly," Jones said, and by the third wave we were relying on each other more and more. My demo ended with the arrival of an armored car — a foe that could take me down with a well-placed shot. Destroying the car required hiding, attacking and relocating often, as well as using heavier weapons.

While both modes required honing my skills, I never felt the pressure to sneak around as in the solo experience. Both Overwatch and Survival mode encouraged me to focus on my partner — even when it meant blowing my cover to do so. 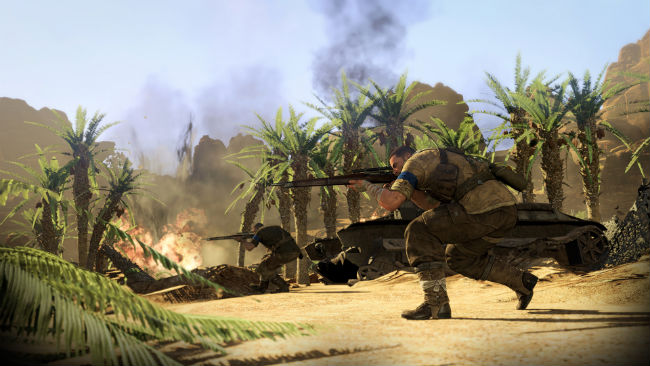 Sniper Elite 3 launches June 27 for  Windows PC and July 1 for PlayStation 3, PlayStation 4, Xbox 360 and Xbox One.