Share All sharing options for: Why Nvidia created its own hardware platform and started developing games

Nvidia had something to prove, and that required change.

Founded in 1993, Nvidia is best known for designing and manufacturing the graphics processing units (GPUs) that transform massive amounts of code into video games. It flexes its muscles with regular revisions of ever more powerful hardware that serves as a key component in larger systems like consoles and PCs. Like its hardware, the company has played an important supportive role within the industry. Behind the scenes, Nvidia engineers quietly assist developers, helping them optimize games.

On both the hardware and software sides of the balance sheet, Nvidia technology enables the games that others design, but its engineers' names don't appear at the top of the rolling credits in the latest AAA releases.

A few years ago, the  industry began to shift — to expand. Mobile gaming was in its ascendancy, and Nvidia introduced new hardware for the new markets. But, Nvidia realized, selling hardware to smartphone and tablet manufacturers was a necessary but insufficient strategy in this new era. Its Tegra processors were capable of doing more than they were being used for, but that was a hard sell an industry that equated mobile with casual.

Nvidia's old, quiet way of doing things wasn't going to prove otherwise. So early last year, Nvidia decided to break free from the confines of the third-party homes in which its hardware had always lived. Nvidia decided to speak up.

At CES 2013, Nvidia revealed a new class of hardware for the company: Project Shield, an Android and Tegra 4-powered handheld that combines a console-like controller with a screen. Released last July as the Nvidia Shield, it was a departure for a company used to living in others' boxes. The Shield isn't an internal component of a larger system. It is a system itself, a consumer product built by Nvidia around Nvidia hardware, designed to play games built for the system and, just as importantly, to cooperate with Nvidia's PC hardware and play AAA games like Assassin's Creed 4: Black Flag, Battlefield 4 and The Elder Scrolls 5: Skyrim using GameStream technology. 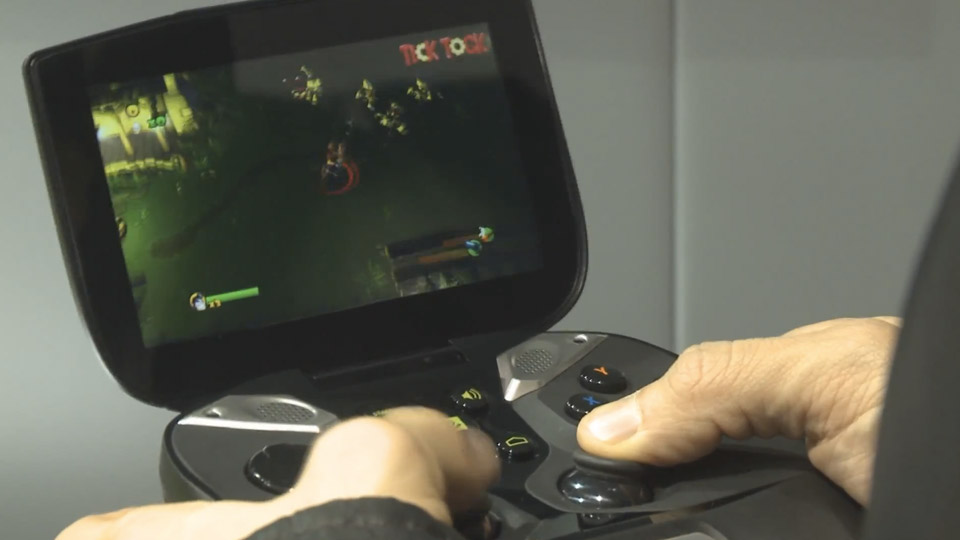 Then, in late March 2014, the company announced that Portal was in development for the Nvidia Shield, and the game would run natively on Shield hardware. That same day, a representative from Nvidia told Polygon that Valve wasn't developing Portal for the Shield. Nvidia was porting Portal.

Nvidia, a company that provided the hardware that developers created their games on, was now acting as a developer. But why? Polygon spoke with Bill Rehbock, general manager of mobile games, and Mark Smith, manager of technology evangelism in North America, to answer that question.

Nvidia has something to prove, and it's using hardware and software to do expand what it means to play mobile games and redefine what a mobile mobile device is.

THE PATH TO PORTAL AND NVIDIA

Portal's path to Nvidia's handheld began a few years ago when Valve started porting its games to Linux. According to Smith, who serves as a conduit between developers and Nvidia, the two companies also worked together on aspects of SteamOS, the free, Linux-based operating system that will power Valve's Steam Machines.

The Nvidia Shield runs a "pure" version of Google's Android operating system, which is based on the Linux kernel. The similarities between Android and SteamOS got the engineers at Nvidia thinking.

"As you know, Linux and Android are very similar," Smith told Polygon. "And we, of course, had Shield, and we thought, 'Wow! It would be amazing if we could have Portal on Shield because that's the prefect game for a mobile experience.'"

So a group of Nvidia employees began a skunkworks project to port Portal. They showed it to Valve, the company approved, and began working with Nvidia. On May 12, Valve's Portal and Half-Life 2 arrived on the Nvidia Shield.

Nvidia's ability to develop games didn't materialize with Portal. Rehbock told Polygon that the requirements for working at Nvidia aren't that different than what you'd find at a developer. In fact, many Nvidia employees were once game developers who now help their former employers with Nvidia hardware.

"Nvidia has their hands pretty deep into things like Unity and bringing Unity over to ARM and Android in the first place," Rehbock said. "Bringing Unity over to Windows RT, for instance. We've always been very instrumental in helping out with that, with Unity as well as Unreal Engine.

As an example of Nvidia's history of working with developers, Rehbock offered a Tiger Woods game from the early 2000s, in which Nvidia worked with developers to change flat grass textures to animated assets that responded to the in-game wind and blew in the correct direction.

"Then, after that, it's game after game after game," he said. "The lighting and plastic shaders in Lego Star Wars and lightsaber swoosh, the glow in Tron 2.0, the shadows in the original F.E.A.R …. There's a lot of Nvidia code in hundreds of games that are out there."

Those years of work in what was essentially video game code development also contributed to Nvidia's decision to formalize its efforts with the GameWorks program, which provides software technologies like PhysX and VisualFX that developers can incorporate into their games.

Nvidia's history tended to focus on PC platforms, but gaming's landscape is shifting. The mobile gaming revolution, ushered in by Apple with iOS and continuing with Android and Windows products, means that people can play games on new platforms. Nvidia's Tegra series of processors are its response to those changes.

With its hardware, Nvidia wants to bring serious, hardcore gaming to to devices like smartphones and tablets running its hardware. The problem for Nvidia is that those platforms aren't associated with that kind of gaming.

"You don't need to water it down."

And that's why, in part, Nvidia decided to go public with projects like GameWorks and the Nvidia Shield. After all, if Nvidia doesn't, who will?

"I think … that PC gaming — and equally important, gaming on platforms like Android — need somebody to be a more vocal shepherd of the platform," Rehbock said. "And we need to be out there as a more vocal steward, talking about PC gaming."

Nvidia's self-appointed mission is to spread the word about high-quality mobile gaming and PC gaming, where it believes the experience is better than competing current consoles (all of which are running its competitor AMD's hardware). Its efforts began early last year with hardware and the Nvidia Shield hardware and continued this year with software, in the form of Portal and Half-Life 2.

"I think that there are a lot of proponents who think that mobile is a only a casual-only sort of gaming experience," Smith said. "It's a big part of Shield for us: to show people that, with controls and a great GPU and CPU in the device, you can have a premiere experience like Portal."

According Rehbock, Nvidia is directing its message about the capabilities of its new hardware as much to developers as gamers because they both need to be convinced.

"They absolutely do need convincing."

"When you have a really, really great AAA game idea that is not casual and does appeal to the core, midcore or hardcore gaming audience, you don't need to water it down," he said.

"If you're a AAA developer, and you don't think it can be done on mobile, we can help you get there," Smith said.

Helping developers and pleasing gamers are not new goals. But the hardware and platforms on which Nvidia can do so are. Assisting developers behind the scenes has been part of Nvidia's mission all along, long before the company was vocal about it. The trick now is to convince the world that its hardware can bear out its claims and that it offers a desirable place to play high-quality games.

Rehbock admits that it's still a hard, but not unsurmountable, sell. That's why Nvidia is leading by example with Project Shield, speaking up with GameWorks and, in a sense, following the example of its console competitors.

"They absolutely do need convincing, because they're in business," he said of developers. "It's not that easy, but they need to see that it's possible, they need to see, kind of, the first penguin go in and demonstrate that it can be done before they put their money behind it.