Share All sharing options for: Kyoto Wild is a Bushido Blade-inspired fight to be the last man standing

Announced earlier this month, Kyoto Wild is an isometric weapon-based brawler about retired ronin fighting through feudal Japan. The game supports two-to-four human players duking it out for the title of last man standing and the privilege of moving through the game's polygonal world. Each screen is a different section of the game's offerings; rooms, courtyards and more in a simple town.

The game only has one-hit kills.

It starts like this: players begin in the same area, armed with a variety of weapons that will determine their abilities. One by one they pick each other off. When only one player remains, he or she moves on to the next stage, which differs depending on where they choose to go. The defeated players are reincarnated once again in the form of random townsfolk present in this new area.

Oh, one more thing — the game only has one-hit kills.

"It started as, 'I just want to make Bushido Blade for PlayStation [with] four players,'" Diefenbach said. "As I tinkered with it over the course of a year, I just kept wanting to incorporate all the other things that I love in games. Not arbitrarily, but I wanted to be stubborn about it."

Instant kills might not be so bad. There's a definite advantage to staying alive, besides racking up the highest number of kills and keeping your weapons, but Diefenbach says even death has a reward.

"When you come back in the next room, you're a new character and you've got a new weapon, and it's kind of fun to see who you get," the developer said.

"I really like the way the level flow works — three players die and one player moves on. I would like to do level unlocking, because a lot of multiplayer games don't have level unlocking. I want to have players actually find the levels." 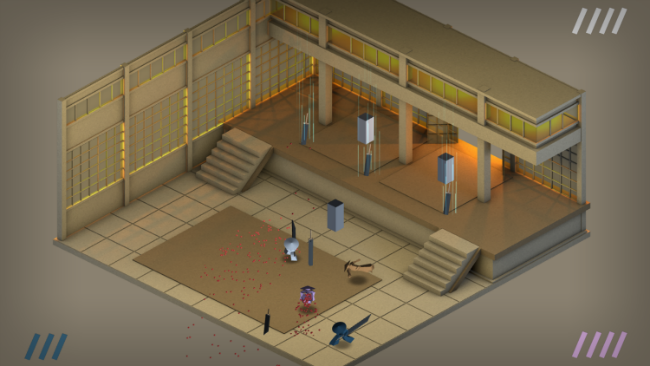 Diefenbach has yet to decide on platforms for the title, which he hopes to release next year, but he is interested in a console release. Online multiplayer is another goal.

"A lot of us make local multiplayer games because they're really rewarding as a designer and as a game creator," Diefenbach said. "When you make a local multiplayer game as an indie and you bring it to parties ... [people are] laughing and having fun and it feels really good. It's very motivating."

Online multiplayer is less likely to be present right away for a much simpler reason, he added: It's hard.

"When you're making a game on your own or with a small team, you have to start counting the minutes," he said. "The time you spend adding that is time that gets taken away from polishing the feel of the game, polishing the art, putting in little easter eggs and stuff. You just have to pick, and for some people it's not worth it. Or at least not worth it right away."

Diefenbach plans to bring a playable version of Kyoto Wild to E3 2014. Updates on the game are available by signing up for its mailing list.