In Sheep's Clothing gives in to the dark side.

We're trying something new with episodic reviews on Polygon. What follows is something of a hybrid between recap and review and, as such, should not be read by anybody worried about spoilers. You've been warned.

OK, The Wolf Among Us, you win.

It took me until In Sheep's Clothing, the penultimate episode of the Big Bad Wolf's hunt for an elusive serial killer, but I finally gave into my animal instincts.

After being figuratively spat upon by nearly every member of Fabletown, I finally stopped giving a crap about what any of them thought and started bloodying a few noses.

I'm having a lot more fun now, and that's kind of a shame. 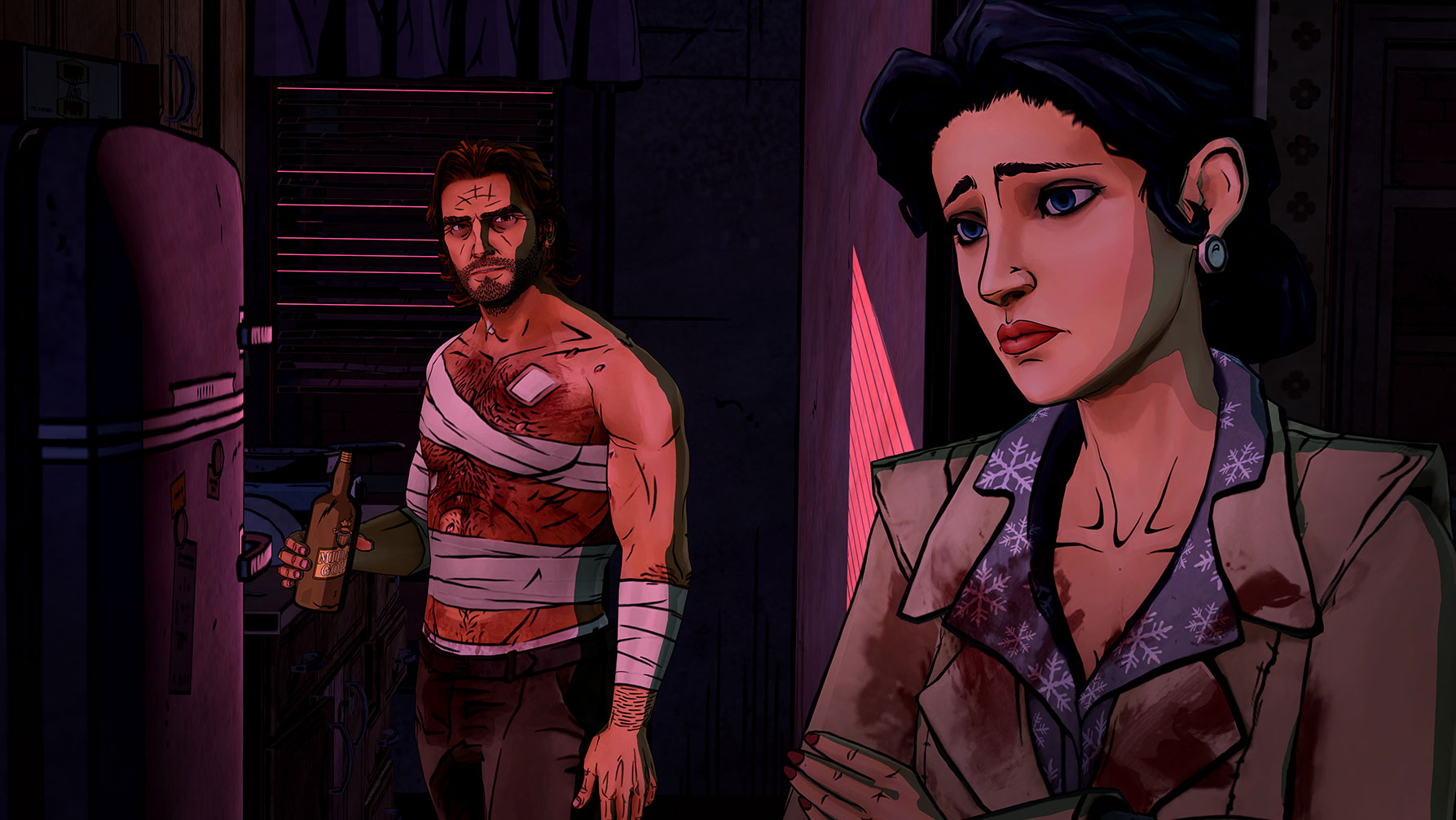 On Episode Three: A Crooked Mile

At the beginning of A Crooked Mile, we find Bigby in a pretty dark place. Literally. In a seedy, blood-spattered hotel room the Big Bad Wolf has just uncovered the big bad secret that may just turn Fabletown on its ear. With the discovery of some … unsavory photographs, Crane has just been revealed as Snow's number one fan and the lead suspect for the murderer stalking Fabletown.

What follows is perhaps the most focused episode of Wolf Among Us yet: Bigby must find Crane. But that also makes it the most procedural. There are moments of reflection, but this is the middle of a detective story, and A Crooked Mile feels a little like an episode of Law and Order (or at least the Law part) as a result.

As In Sheep's Clothing begins, Bigby is still haunted by images of Bloody Mary after her brutal attack, which left him riddled with silver bullet fragments and with a mangled forearm.

As soon as our lupine hero is out of the woods, newly assigned deputy mayor Snow White tells Bigby to clean up his act and finish the investigation by the book. Snow says she worries Bigby might go off the deep end, break a few eggs that can't be reassembled. As I would find out later in the episode, she was right.

We're interrupted by a visit from Nerissa, the former Little Mermaid, who's afflicted by a curse from The Crooked Man, revealed as the apparent main antagonist of this season in the last episode. Thanks to the curse, she can't answer questions about her master. She has something to impart, but she's bound from saying exactly what that is.

The conversation with Nerissa seemed like a promising opportunity for a dialogue-driven game, perhaps letting me find a clever way through conversation choices to subvert the curse. However, I just sort of frustratingly fumbled through, so if there was an elegant way to get at what she was hiding I sure didn't find it. It seemed like a bit of a missed opportunity.

I have better luck getting leads from Beauty and Beast, who are so unwilling to give up their upscale lifestyle that they've gotten in deep to The Crooked Man. They claim Bigby wouldn't understand because he's lived in a hovel both before and after the Fables came to our world. Then they not-so-subtly hint that their lives would get a lot easier if Bigby would tear the loan shark's throat out.

It's about here that my patience with Fables treating me like crap starts to fail. In the first episode of The Wolf Among Us, I had kept an embarrassing secret for Beauty and in return I had an enraged half-human husband on my case and little support from her. Like so many of the choices in The Wolf Among Us, it seemed like I was screwed no matter which path I chose. 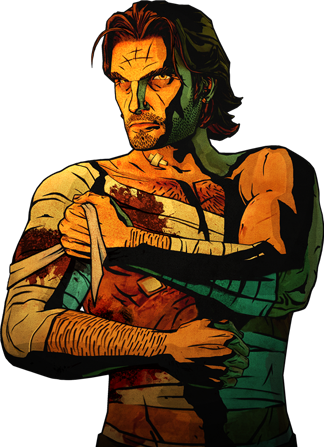 Working on a lead from Beauty that The Lucky Pawn shop may be a Crooked Man front, I run into Jack and Toad who is, again, out of his magical, costly glamour that's supposed to hide his amphibian side.

If the primary choice of Wolf Among Us is how violent Bigby is willing to be, the secondary choice is this: How closely will Bigby adhere to Fabletown's laws when it means punishing the beaten-down citizenry? 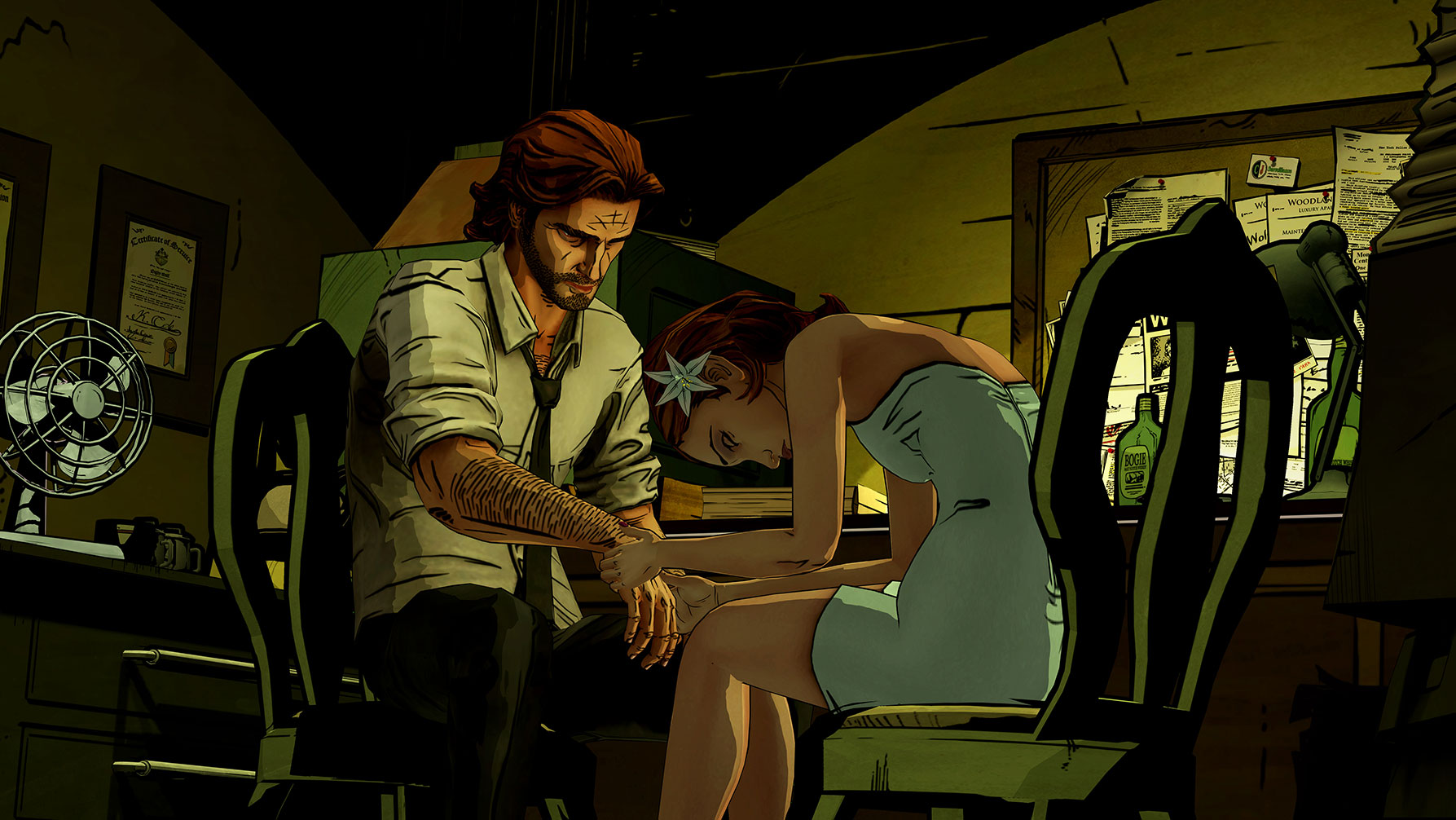 Will Bigby alienate the entirety of Fabletown through violence or law enforcement?

Toad looks like a toad, which is against the rules in Fabletown, but he doesn't want his family to live in the prison camp of The Farm, where animal Fables are banished. But he also can't afford to keep himself magically hidden.

Bigby is trying to turn a new leaf as Fabletown's sheriff, abandoning the violence that caused so many Fables to resent him, but that means following the laws and sending Fables like Toad away, which they're not so crazy about either.

So, the two questions of Wolf Among Us fuse then into one rather unpleasant choice: Will Bigby alienate the entirety of Fabletown through violence or law enforcement?

I manage to huff and puff my way to the pawn shop's owner, The Jersey Devil, who as it turns out is a Crooked Man henchman. Beating him into submission is a momentarily effective way to shake off my existential funk, thanks in part to some superbly sickening sound effects.

My work done, I make a quick stop at The Cut Above (a butcher shop I could have checked out before The Lucky Pawn if I'd wanted) where I find Johann, the butcher. The Crooked Man took over his business and, of course, he blames Bigby. Everybody blames Bigby.

The butcher wants to give Bigby lip for being a brute, but he also wants to covertly alert the Crooked Men stooges toiling in the back of his shop to the sheriff's presence. A few episodes back, I would have tried to win him over, but this was just a step too far. The people of Fabletown were gonna treat me like shit no matter what, so I might as well enjoy myself.

I chokeslam Johann into a wall and beat whatever information I can from him. I find the last remaining chunk of the magic mirror that disgraced deputy mayor Ichabod Crane had used to find the Crooked Man and head back to Fabletown, the butcher's cries of injustice falling on deaf ears.

Trying to take the high road is unsatisfying

Giving into Bigby's dark side is fun, in a sense, but also a little frustrating. Trying to take the high road is so patently unsatisfying, so devoid of rewards, that the emotion I remember most prevalently from my time from Wolf Among Us to this point is guilt. No matter what I tried, it was never enough for anybody and the only way to get through was to pretend I never cared in the first place.

Maybe that's the message Telltale's trying to send with this series, but it's an awfully nihilistic perspective if so.

In Sheep's Clothing gives in to the dark side

By the end of the episode, the pieces came together and I found myself confronted by the Crooked Man and nearly every bad Fable I hadn't yet killed. I probably should have been nervous, confronted by those odds, but all I could muster was relief that they hadn't gotten me when I was still playing nice.

The Wolf Among Us Episode Four was reviewed using an advance Steam code provided by Telltale Games. You can find additional information about Polygon's ethics policy here.