The monument erected in Iceland to commemorate players of CCP Games' Eve Online was vandalized less than a week from its official dedication, apparantly by a real-life group belonging in the in-game player alliance known as Goonswarm.

Goonswarm — a faction known for griefing other players and making repeated attempts to break the game through events like planned suicide bombings and attacks on the Eve econmic hub — apparantly placed the insignia of their group, a bee in a helmet smoking a cigar called "Fatbee", on the face of the monument (photo above). According to a post on the Eve Online forums, the sticker is not of the peel-off variety and was placed there within hours of the Eve Fanfest conference wrapping up.

Additionally, an Eve player going by the name Gaius Homerson on Twitter posted a photo in which the name of another player on the monument has been scratched out. Homerson said he himself scratched out the name of Xenuria, who is well-known troublemaker within Eve Online and was once accused of being a member of the lulzsec hacker group.

@Xenuria found your name and lost it again. #tweetfleet #eveonline #evefanfest You're welcome, everyone in eve! pic.twitter.com/rQ5hnkRe8V

The monument, unveiled on April 30 prior to the start of Eve Fanfest, is meant to celebrate the hundreds of thousands of players that make up the Eve Online community. Beneath the five-meter-tall monument is buried a laptop carrying various videos and messages from Eve Online players and CCP Games staff, serving as a sort of time capsule. 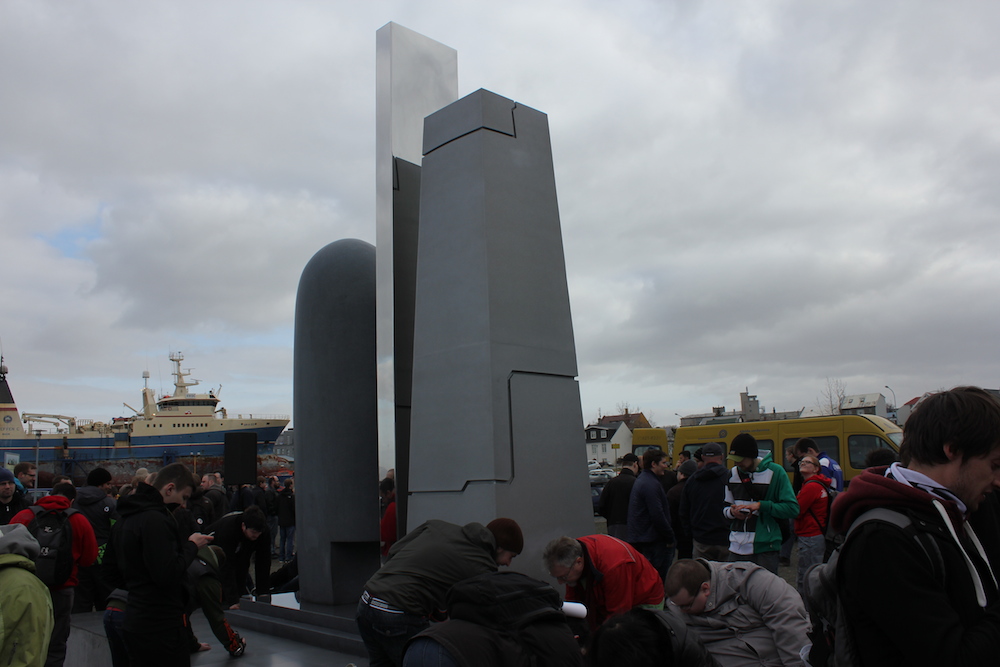 Update: Eve community manager "CCP Falcon" responded to the vandalism on the game's forums, stating CCP is alreading looking into the matter and plans to take legal action where necessary. The game accounts of involved individuals could also be subjected to action by CCP as the company begins reviewing security footage from surrounding buildings in an effort to catch the culprit.

"What's happened is absolutely disgusting," Falcon wrote. "It's an insult to the entire community and is clearly the work a person who believes that behavior in a virtual world is a valid reason to make a real life personal attack on someone, and deface public property.

"We will not tolerate this."

Falcon noted that several members of the communtiy have already stepped forward to help idenity purpetrators. However, he noted that CCP would be willing to lessen if not refrain from punishment if the vandal confesses directly to the company.

"With that in mind, I'll make a simple one time offer, that if the person who defaced the monument wants to come forward and contact me relating to this, then they can do so by Eve mailing my Dev character," he wrote. "If this happens, we'll take it as a gesture of good faith after an extremely stupid act that was committed."