How Mushroom 11 uses self-destruction to build a future

Share All sharing options for: How Mushroom 11 uses self-destruction to build a future

Until now, I've never seriously considered what it would be like to cut off my own arm.

It's an undeniably morbid thought, but one that repeats itself over and over as I burn my way through an early build of Mushroom 11, a destruction-based puzzle platformer from indie dev and Untame co-founder Itay Keren.

Mushroom 11 is an Indie Fund title and former Global Game Jam Project that takes players to a post-apocalyptic world. There are no zombies, no straggling humans to protect or control. Instead, the game stars an amorphous blob — a mushroom ball of cells that sizzle off at the will of the player and regrow rapidly.

I played through the game's first several chapters, which mainly revolve around pushing and strategecially destroying parts of the olive green organism. Each time I burned off part of its tail, new cells would quickly spawn on its front. With a bit of foresight, I could move my mushroom forth rapidly and with some grace — a skill Keren says players eventually learn. Cutting off parts of yourself to live is one of the hardest things for players to understand, the developer said, and it's not something that comes naturally to most platformers.

"You can just remove a cell and it means nothing."

"The realization of destruction, that you need to destroy pieces ... it takes a long time until you kind of reverse learn everything you know about platformers," Keren told Polygon during a recent interview. "Instead of thinking about pushing, you start thinking about destroying. You understand that everything you touch in the game, everything on this fungus, is gone forever.

"Once you get used to the fact that you are actually a destroyer ... it is, I feel, a very profound game moment for [players]. This is very grim, and yet enjoyable to see: how easily you can just remove a cell and it means nothing. You're as good as new."

Learning how to destroy yourself is an easier lesson than control — mostly because players have very little of it. If I tumbled down a hill or off a ledge, I was helpless to stop myself. Moves became be painstaking as I shaved off the tiniest amount of cells to make myself into a bridge, only to rocket through a small tunnel by obliterating as much of the mushroom as possible. Keeping my mushroom in check was half the challenge, but that's no accident.

"[Control] is definitely one of the things I enjoy taking," Keren said. "The world is familiar. Everyone who has played platformers has seen a lot of the elements that you see in this game. Moving platforms, elevators, moving belts. And then, you kind of break everything and use a protagonist that acts completely different. It takes a long time, and you need to embrace the fact that you lose control and relearn how to control it." 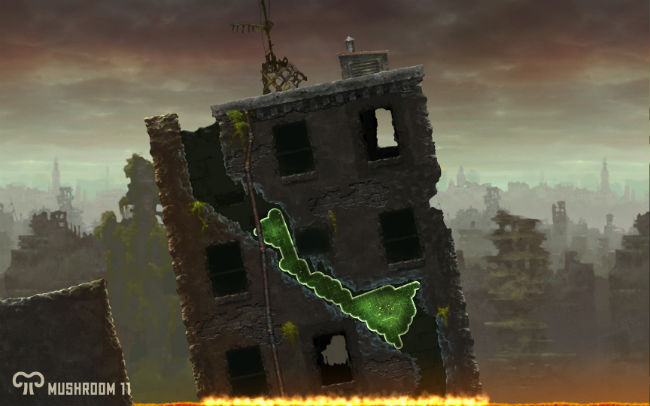 I spent my time with the demo switching back between careful slices to instant obliteration, but player strategy tends to fall across the board, Keren told me. There isn't one strategy he recommends over another, and in watching people play, he's never seen a clear advantage to one style. People get there all the same, he said.

As for the game's narrative, it might be a little harder to discern. There's a story to be told here, but Keren has no intention of laying out an outright narrative for players. The truth behind the mushroom and the world it inhabits is hidden in posters and other clues throughout the game. Everything is up for interpretation, Keren said.

"What I'm trying to do is step back and let the mechanics and let the motion tell you the story in a very hinted way," the developer said. "We're talking about death, and destruction and rebirth and ... this is something that comes to life in the story. I want the players to feel it, even without being told what's happening." 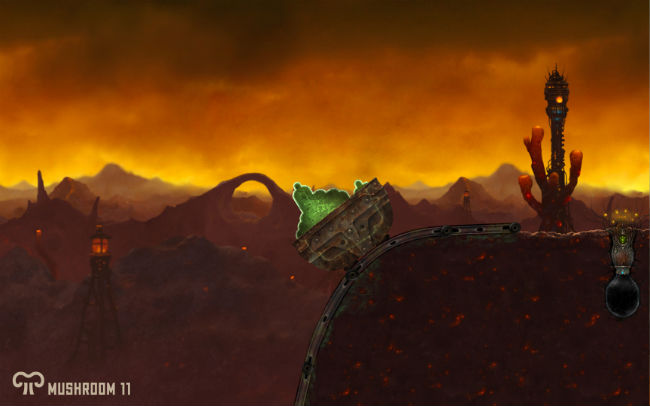 Keren hopes to release Mushroom 11 in early 2015. It's slated for launch on Linux, Mac and Windows PC via Steam "for sure," he said, with plans for tablets and handhelds as well. "It works well on touch screens," he added.