Bound by Flame is a generic mess.

At first, Bound by Flame was just generic.

Those were the good times.

Bound by Flame's dark fantasy draws clear inspiration from the adult themes of popular franchises like Game of Thrones and The Witcher. But its approach to that supposed maturity quickly proves itself just as shallow as its approach to gameplay.

A great RPG gets deeper as it progresses. Though it has the individual pieces — character development, relationship building with party members, tactical combat — Bound by Flame never expands on these elements past their surface-level introduction. It's less an epic hero's journey and more a foul-mouthed kid playing make-believe with wooden swords.

The story of Bound by Flame follows the seemingly hopeless plight of a group of mercenaries trying to survive in a dying world. You play as a grunt with the codename Vulcan, and your mission is to protect a group of mages attempting to save the world from the evil Ice Lords. In the midst of a summoning ritual gone wrong, Vulcan is possessed by a flame demon and becomes humanity's last best hope against its captors.

While this may sound like pretty generic fantasy fare, Bound by Flame attempts to spice things up with swear words. Lots of swear words. And jokes about how silly it is to believe dwarves or dragons are real. Not in this realm! The game desperately wants players to think it is a serious world. 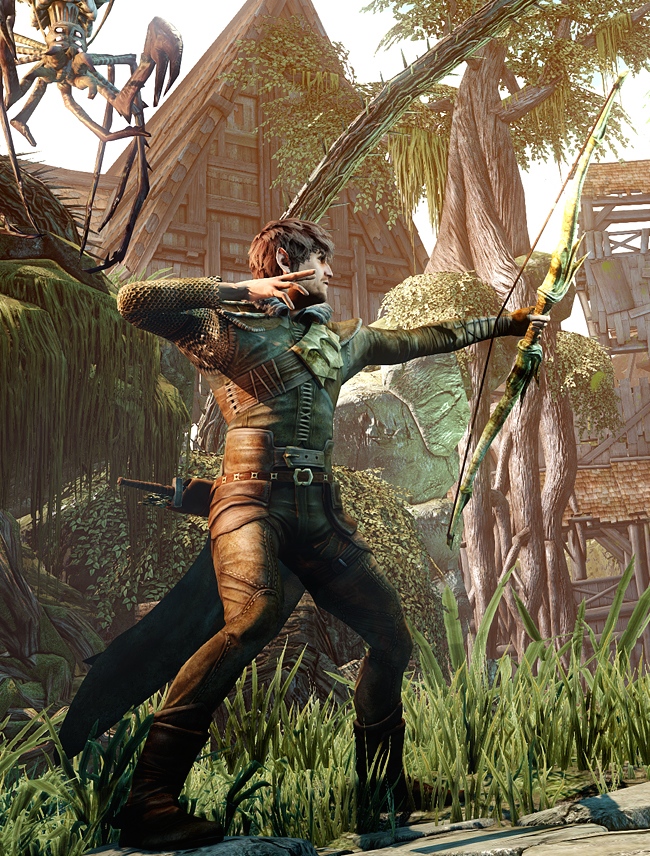 But the concept of the Ice Lords is inherently goofy. This group of ancient, powerful magic-users commands an army of the undead and has slowly killed off most of the world's population. Why would they commit such heinous acts? Because they're evil. I went through every conversation tree available but couldn't find any deeper explanation.

It doesn't help matters that each of the seven Ice Lords has a laughable, pun-based name. One of them calls himself The Chiller. Seriously. And characters in the game repeat this with a straight face.

Bound by Flame actually intends for humor with some of Vulcan's dumb one-liners, but the main plot of the game is caught in this awkward space between dead serious and tongue-in-cheek. Even in the rare moments where I started to buy into the plot, the stupid characterization never let me get pulled in very far. These people are survivors, among the last remnants of humanity, yet they consistently make short-sighted decisions with no real explanation and no purpose beyond pushing Vulcan into another dangerous situation to fight through. 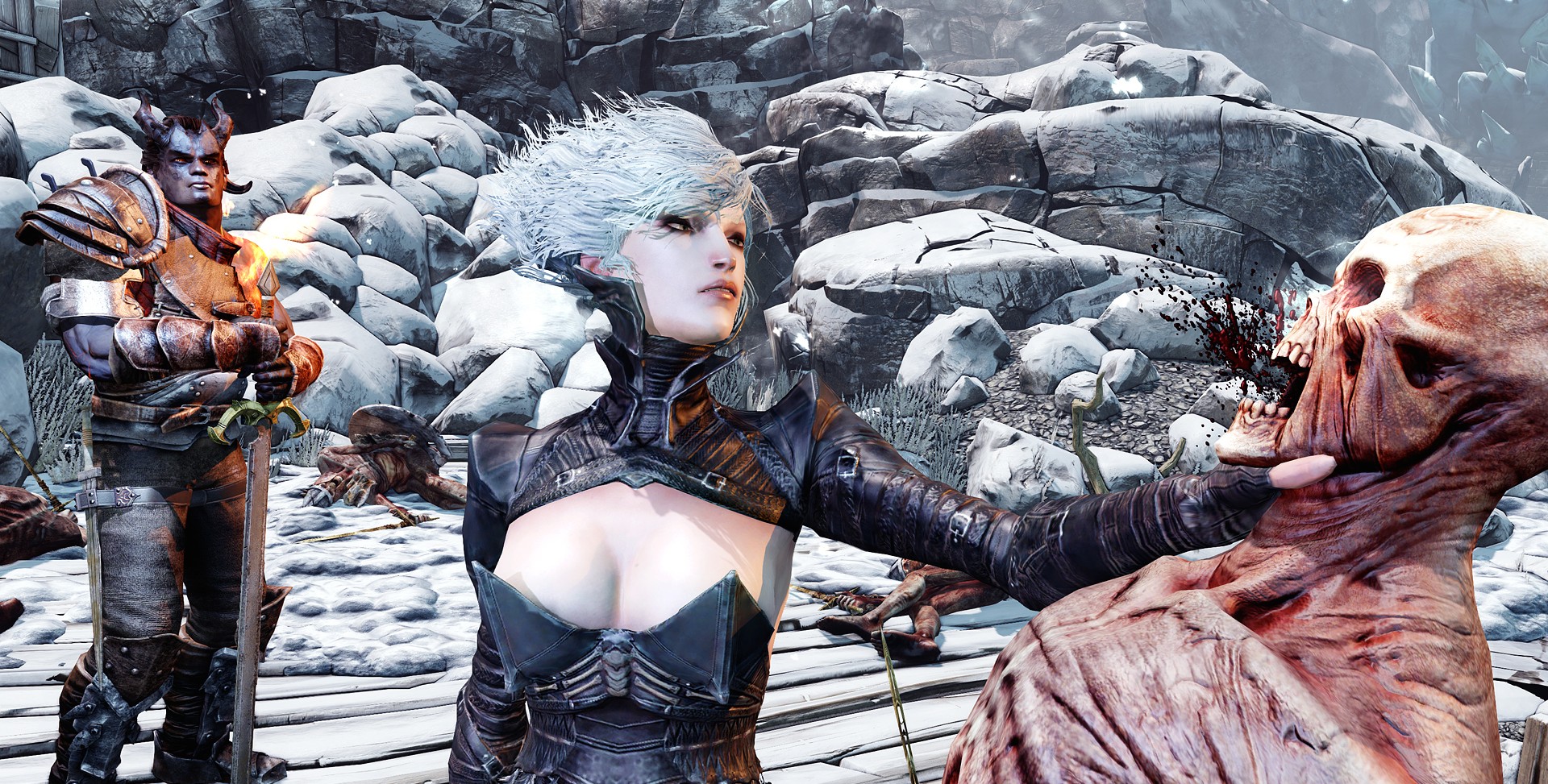 Though it allows you to choose a gender for main character Vulcan, Bound by Flame has a questionable approach to some of its set female characters. Of particular note is Edwen, a scantily-clad witch that Vulcan rescues from captivity. She initially complains about how her captor left her so poorly clothed but then proceeds to…not ever change into something more appropriate for battle.

Later in the game, Vulcan faces an equally sexualized female boss character. Rather than killing her with his sword or daggers, the game slips into a cutscene where he chokes her to death while straddling her suggestively. Of course you could be playing a female Vulcan here rather than a male, but that doesn't make the weird mix of violence and sex playing out here any less unsettling.

And how does the game follow up that disturbing moment? With a crappy one-liner.

Those fights aren't worth the flawed logic that leads to them, either. Bound by Flame allows Vulcan to go down three primary paths of character development: a powerful two-handed sword, stealthy dual-wielded daggers and destructive flame magic opened up by Vulcan's new demon buddy. Rather than specializing in one path, the game encourages putting skill points into each and jumping between them at will during fights.

While the freedom to change fighting styles whenever I wanted was welcome, none of the three paths feel natural or powerful or, well, fun. Sword-swinging is slow and clumsy, but the daggers swing too far in the opposite direction, making it hard to keep track of the action as Vulcan bounces between enemies.

fights aren't worth the flawed logic that leads to them

As for magic, each spell costs mana, a resource that proves prohibitively expensive thanks to Bound by Flame's non-traditional leveling mechanics. Progression earns you skill points but doesn't actually improve your hit points or mana on its own. Instead, you have to purchase special (and very limited) perks that raise those stats. I started the game with 100 mana and ended with a whopping 125 — not nearly enough to make me feel like I could legitimately sling spells full-time.

At the very least, the game allows you to cast spells without ever putting away your daggers or sword, but I often found myself too focused on avoiding damage to remember to take advantage of my full repertoire of magic. Since your HP is also stuck at a constant low level, enemies do huge chunks of damage with every hit. Mitigating damage by way of blocking (if you're using a sword) and dodging (if you're using daggers) is a major challenge, but it gives the fights a very simple rhythm: attack, attack, dodge, attack, attack, dodge, repeat ad infinitum.

That repetition is fine at first, but as Vulcan's max hitpoints remain largely the same, enemy health pools balloon and fights stretch on for ages. By the end of Bound by Flame — when boss creatures from earlier on show up as regular encounters — each fight became a test of endurance. The only challenge was trying to stay awake while tapping out the same couple of buttons and downing health potions whenever I made a mistake.

Bound by Flame tries to add some depth in the form of (laughably ineffective) explosive traps and the choice of how much you want to invest in magic at the risk of losing your humanity, but it struggles to make that latter dilemma meaningful. At various points in the story, you have to make choices to either embrace your human side or push you closer to the demon within. Beyond a somewhat intriguing first chapter, all of these decisions are obvious, good-or-evil judgments. I made a choice on which direction to take my character in early on and never felt even a bit challenged to change paths based on the situations the game presented.

Bound by Flame is a generic mess

I tried everything I could think of to get myself to care about Bound by Flame, but eventually I tired of doing all the heavy lifting myself. Between a stale plot that goes nowhere, poorly handled characters and a clunky, boring combat system, there was nothing left for me to hang onto, no momentum left to help propel me. Bound by Flame is worse than just generic; it's a mess of a game pretending at greater ambitions.