Full Bore is deeper and smarter than its simple looks belie.

Full Bore is no joke.

At first glance, it looks like a generic indie puzzle-platformer. With a pun title — you play as a boar who gets caught up in a pig-run mining company — and 16-bit aesthetic, the first hour or so convinced me that I was in for a game I've basically played many times before. All of these factors obscure what is, at its heart, a deep, difficult, massive game, less a platformer than an open world stocked with challenging puzzles.

Full Bore began with my porcine heroine stepping onto a literal minefield and subsequently finding herself in the employ of the Full Bore mining company. The story is surprisingly good — it starts with this goofy premise and turns into a dystopian narrative, told through computer log entries and lost tomes. It touches on heavy themes: the subjugation of animals in the name of science, the rise of technology without moral constraints, even the folly of humankind. 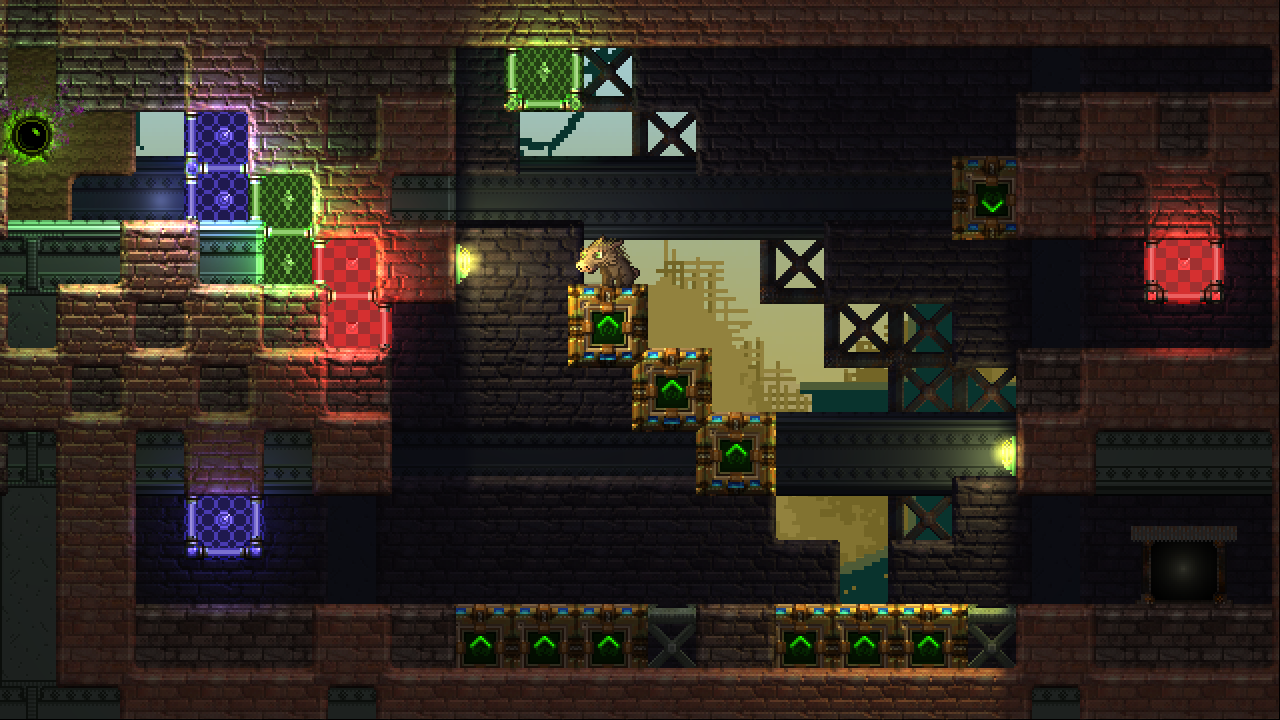 I wasn't expecting that when I opened up a puzzle game about mining pigs, but it lends resonance and a touch of mystery to the game. I was always on the lookout for explicit pieces of lore, and enjoyed the subtler storytelling as well. I explored underground caverns, mysterious temples, even a dingy "moletown" that featured a dive bar called The Sweaty Pickle, complete with a muscle-bound mole as a bouncer. The environmental storytelling is fantastic — painting a vibrant, bizarre world that was a pleasure to spelunk in.

As a boar, making my way through Full Bore depended on my limited abilities — I could move left and right, push blocks around and stomp. There's no jumping or dashing, and the only way I could reach higher ground was by arranging blocks in stair-like formations and climbing up. The game also let me "rewind" when I screwed up, which came in handy. 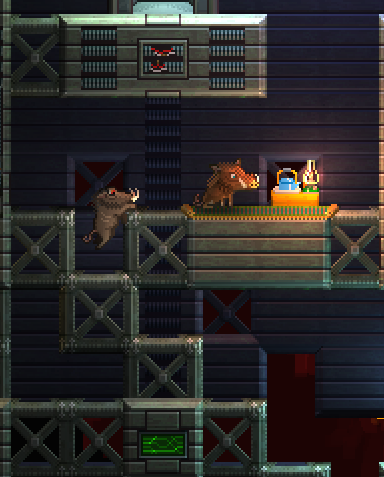 The world is designed around these constraints. It's constructed entirely out of blocks, and each block material responded differently to my efforts. Ash and sand disappeared quickly. Rusted blocks fell apart as soon as I climbed off of them. Crates and bridges responded differently to stomping. There were even multicolor blocks that came in pairs — if I deactivated one, the other would materialize. To understand Full Bore, I had to get my hands dirty and figure out how to manipulate my environment.

The learning curve is gentle at first. In one early example, I needed to figure out the order in which to push a series of blocks so I could climb up onto a roof. In another, I ran across a series of rust blocks and used crates to make my way over a sea of ash. But puzzles got complicated quickly, especially as new materials with new quirks were introduced. I always needed to think several steps ahead, and there was a fair amount of trial and error involved. 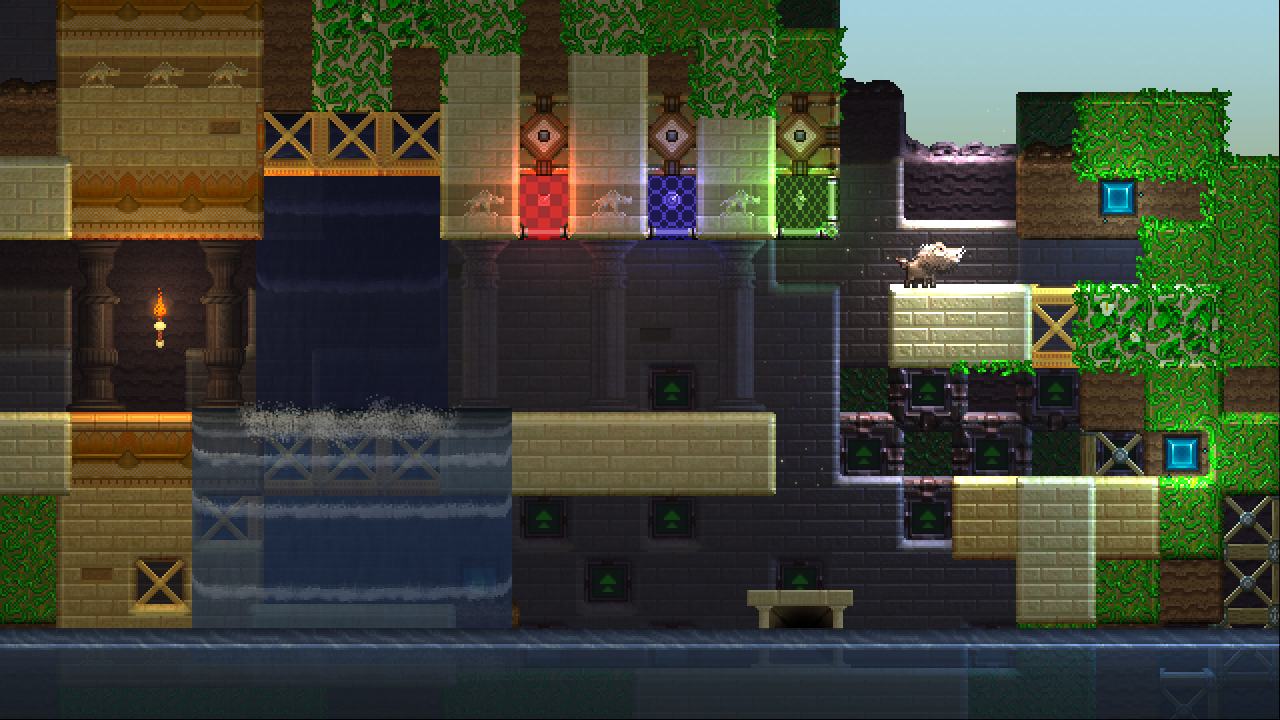 I always needed to think several steps ahead

While this was sometimes frustrating in the moment, the sheer rush of the inevitable "aha" when I found the solution was always worth the effort. I was even proud of myself when I solved tougher puzzles. Early riddles had me throwing my fists in the air in victory upon solving them. Later on, after spending hours on one particularly hairy solution, I wanted to throw myself a party. Full Bore made me feel like the smartest little piggy on the planet, and those moments were plentiful.

For the most part, Full Bore's puzzles are deliberate, painstaking affairs. But occasionally, the game forced me to move quickly and solve riddles under time pressure. As the control scheme better suits the slower, more cerebral approach, faster puzzles were exercises in frustration. I restarted rooms time and time again, stumbling though until my damned pig finally pushed the right block fast enough for the solution. This makes much of the endgame tedious.

I loved exploring the massive world, but I got lost

Full Bore also suffers from its lack of clear direction. I loved exploring the massive world, solving riddles at my own pace and meeting all of the anthropomorphized wildlife in the mines (and weirder surrounding locales). But I got lost — really lost — at multiple points in the game, with no indication whatsoever of how to progress. There is a map system that showed me whether I had missed a gem or an exit in any particular section, but never a sign that I hadn't hit an important story point.

I was able to muddle through — but not without wasting hours walking the same rooms over and over again.

Full Bore is deeper and smarter than its simple looks belie

Full Bore's personality and charm kept me coming back even when I was stuck on a frustrating puzzle, or lost somewhere in the mines. It tapped into something deep within me — after a few days with the game I started daydreaming in the game's logic. There may be a hundred indie puzzlers that look a bit like it, but Full Bore is in a much weightier class of its own.