The theism of Goat Simulator: the surprising metaphysics of the year's goofiest game

Share All sharing options for: The theism of Goat Simulator: the surprising metaphysics of the year's goofiest game

Goat Simulator might be one of the most ridiculous games to be released this year. It stars a rollicking goat in an experience that developer Coffee Stain Studios happily describes as players doing "stupid shit." It's goofy, it's weird, and its cheerful madness takes place in a very unexpected place: Purgatory.

Developer Armin Ibrisagic recently revealed the game's surprising setting in response to one fan's theory on Steam. Pointing to the game's "Himlen" and "Helvete" signs, he explained that Google Translate will reveal their true meanings — Heaven and Hell, respectively. Speaking with Polygon via email, Ibrisagic assured us the backstory is "totally real," adding that Coffee Stain is surprised players didn't figure it out sooner.

"Once the Devil and Angel goat were in, along with the Heaven and Hell road signs, we felt it was kinda obvious," Ibrisagic said. "We can't believe you guys didn't see it, it was all there! ... The world is so strange that people should have noticed that something wasn't quite right about it."

"You are always the onlooker ... Always alone."

The game's Wiki, Ibrisagic said, which briefly mentions the Heaven and Hell symbolism, fails to encapsulate the game's hidden meaning. According to the developer, the idea sparked from the goat's longstanding role in animal sacrifice.

"Goats have always been a known and common sacrificial animal," Ibrisagic said. "Even the origin of the word scapegoat comes from ancient sacrifices."

Himlen and Helvete's presence explains the appearance of the Devil and Angel goats in the game, as well as the pentagram players can experiment with. Goathenge, a circle of tall stones, is located closer to Hell; players can trash the circle for an achievement. According to Ibrisagic's original post, this symbolizes "the backwards and old ways of humankind that need to be destroyed for progress to be made."

"The Beacon is closer to 'Himlen,' symbolizing research, progress, and hope," Ibrisagic continued. "The trap once you go to space shows that we must not rush things before we are ready."

As for who your goat really is, the implications are a little bleak. When asked if the game's goat was once human, the developer pointed to his original statement and the mention of "other" humans.

"You might also notice that, no matter what you do, you can never interact with humans," Ibrisagic wrote in his post. "If you lick them or even touch them a little bit, they will instantly go limp. If there are any humans nearby, they will run away from you. When it comes to other humans, you are always the onlooker, always staring from a distance, never part of the group. Always alone." 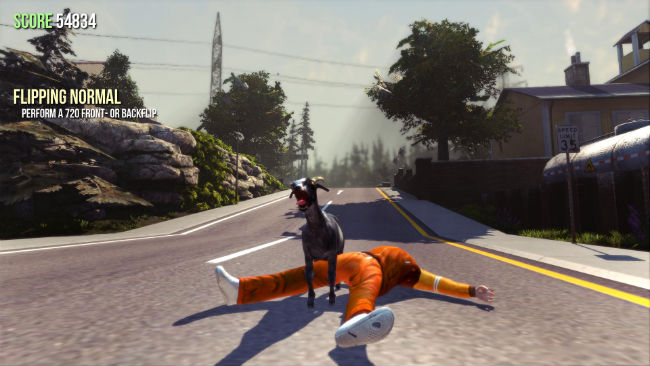 The game's symbolism extends beyond the afterlife as well. Many events or occurrences in the game are allusions to real-world happenings — notably the turbulent protests taking place in Ukraine. Players can see the in-game disturbance for themselves in the form of the demonstration taking place on the Helvete side of the map.

Coffee Stain Studios has no connection to protests in Ukraine or any of the developers there, Ibrisagic said, but the team was looking for a way to represent current events.

"Our idea was that, since we we could reach so many people with Goat Simulator, we should tie some of the in-game content to real life things," Ibrisagic said. "Many gamers choose to ignore things like the Ukraine crisis, so we thought we'd find a way to engage them using gaming as a media."

Calling the Ukraine demonstration just "the tip of the existential iceberg," Ibrisagic added that players who look can find other ties.

"What do you think the driver doing donuts in the crop field symbolizes?" the developer told Polygon. "And the people watching, eating and cheering him on?"