Share All sharing options for: Sunset Overdrive's box art had to capture the game's crazy spirit in one image

Insomniac Games shared a look into the design process for the recently-unveiled box art for Sunset Overdrive, its open-world shooter adventure slated to hit Xbox One later this year.

For the box art, Insomniac worked with ilovedust, a southern England graphic design studio that has previously worked with large companies like Nike, Red Bull and Wired.

"We’ve loved their work from a distance, and thought they fit the game’s art style," explained community lead James Stevenson in a post on Insomniac's website. "When we met them, it was clear they didn’t just understand Sunset Overdrive, they truly got us and our mindset. It was a perfect match."

The challenges of capturing the essence of Sunset Overdrive in a single piece of artwork stems from the fact that the game is not character-forward — players create a character to drive them through the game experience, but there is no one character or set of characters with trademark weapons that would suitable as the game's forward-facing image (like on covers for The Last of Us and BioShock Infinite). The box art had to represent not only the playable hero's style, but the in-game world of Sunset City and all its myriad details.

The final result, shown below, is ilovedust's creation: It features a player-created hero and a Roman Candle gun, as well as groups of different enemies players will encounter in the city — including OD enemy types previously unseen — and Fizzie, the giant adorable-but-deadly mascot seen in many recently promotional images for the game.

"We’re really excited about this box art," Stevenson said. "Working with ilovedust was a dream for us, and they helped deliver something that’s different than anything out there. It’s an insane illustration, and one we think you’ll grow to appreciate more as you get to know the world of Sunset Overdrive even better."

Sunset Overdrive was revealed last year at E3 2013. For more details on the game, as well as the lessons Insomniac took away from the making of its last game Fuse, check out our hands-on preview and interviews with the developers. 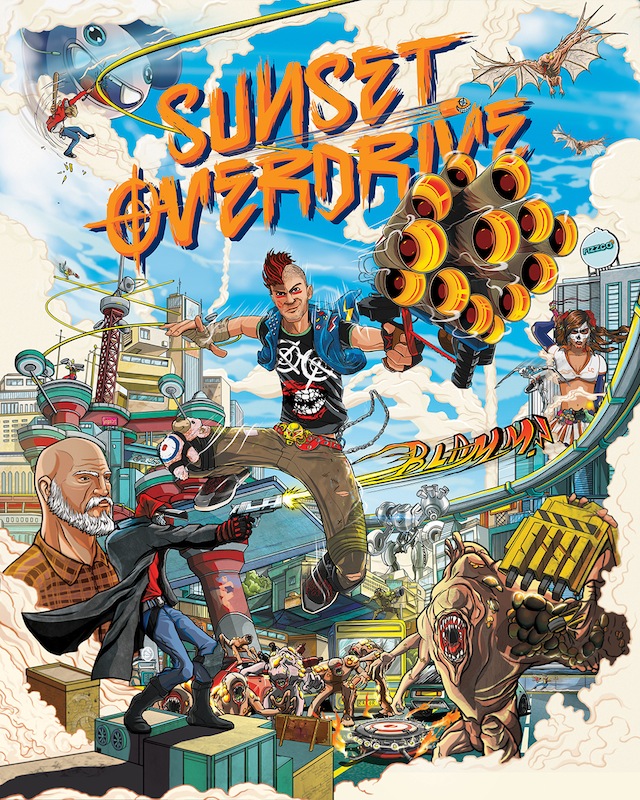