How Borderlands: The Pre-Sequel offers low-gravity thrills without punishment

Share All sharing options for: How Borderlands: The Pre-Sequel offers low-gravity thrills without punishment

Gun fighting on the moon isn't the most practical thing, but for a franchise like Borderlands — filled with robots, mystical powers and a surprising number of lovable psychos — it's a snug fit.

Logistically speaking, however, you could say there's some work involved.

Borderlands: The Pre-Sequel, set between Borderlands 1 and 2, takes place on a moon visitors from Pandora will remember. To make this hazardous new environment explorable, players are suited up with a few notable items, including an oxygen tank that drains as players hop around the game's low-gravity setting.

It sounds risky: jetting around the moon with a flimsy tank to power your biggest, baddest moves. But according to Gearbox Software producer James Lopez, running low on oxygen isn't as dire as you might imagine. It drains your health, but it's hardly enough to kill you.

"We don't want to penalize the player for not having air, but we do want to create a meaningful decision on how you use oxygen," Lopez said. "We don't want to screw you over completely for trying out new things." 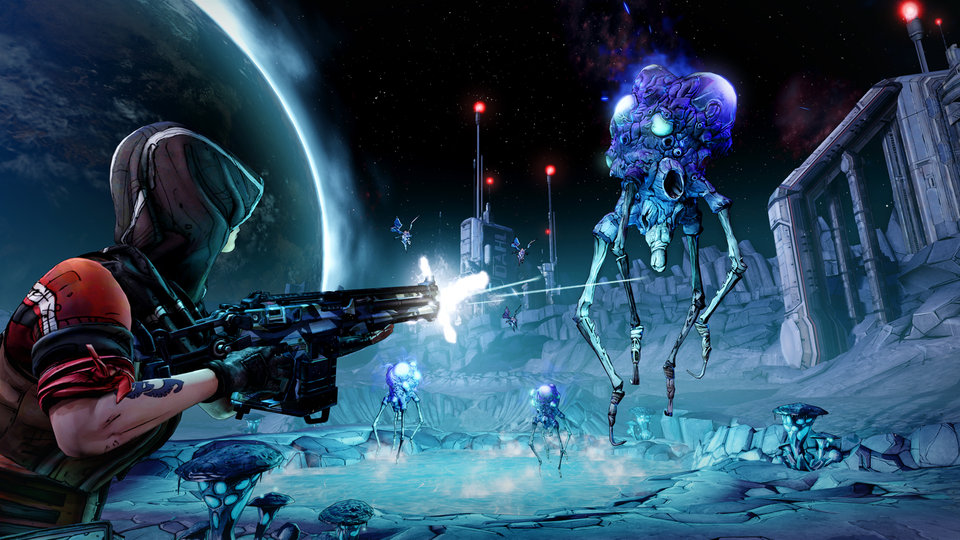 Why Borderlands: The Pre-Sequel is a last-gen game developed outside of Gearbox

Bouncing around Pandora's moon gave me the chance to test this theory for myself. As Athena, I launched myself gleefully into the air, taking advantage of the low-gravity setting to double jump, soar over enemies and bound across huge chasms while my O2 levels steadily depleted. When I reached the bottom of the can — which took a fair amount of goofing around — Athena started to choke and sputter. My super human-like abilities were gone and my health was draining, but it was almost effortless to scurry to the nearest dome or air-leaking vent to recharge both my oxygen and health.

"We don't want you to ever feel like we're trying to punish you for being in low atmosphere area," Lopez explained as my health steadily rose. "We have to show you that the world is dangerous in that you can die, but we also don't want to punish you for essentially being weak (low leveled)." 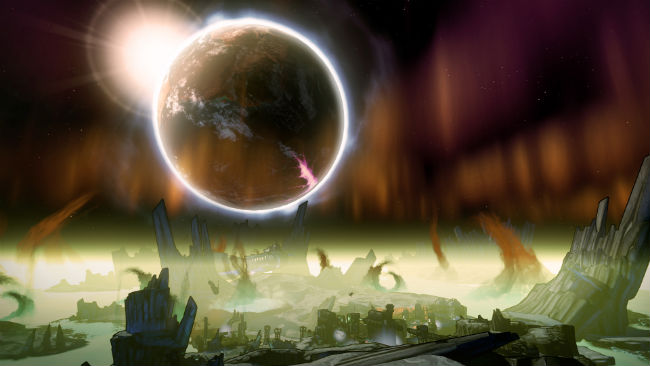 The Pre-Sequel encourages players to get as high into the sky as possible. Jump pads were plentiful to launch me onto tall structures or use to my advantage in a fight. According to 2K Australia producer Joel Eschler, the team's goal is to encourage players to "look up." The building up philosophy used in The Pre-Sequel is similar to the one 2K Australia followed when helping out with Irrational Games' BioShock Infinite.

"For us, we did a little bit of [building up] in BioShock Infinite with the sky rails," Eschler said. "That was a test for us to force players to look up instead of just straight ahead. We had a lot of fun with that and wanted to try and find ways to bring that a bit."

The Pre-Sequel was a perfect fit, he continued, because people think of no atmosphere and no gravity on the moon.

"I don't think we could have done a moon game without low gravity," Eschler said. "We totally went to town with it in this game."

Leaping over an enemy gave me a chance to shoot from the air or rocket back down using each character's ground-pound-like slam ability. The low-gravity atmosphere works both ways, however, and enemies will use it to their advantage as well.

"Because you're in a low gravity situation, you do have to watch out because if an enemy hits you with a strong enough attack they'll knock you off [high platforms]," Lopez said. 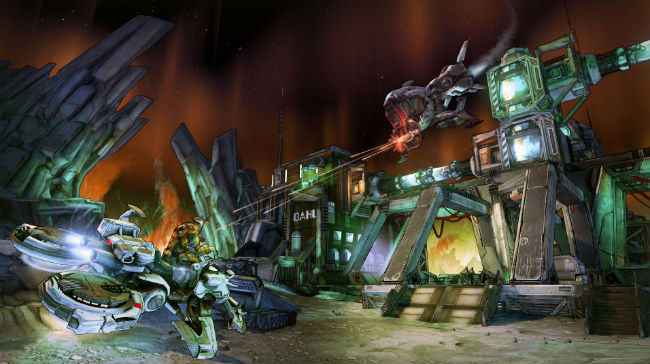 Borderlands: The Pre-Sequel is set to launch Oct. 14 in North America. When the game releases, players will also get their hands on a new weapon type: Lasers. Each weapon will be available with different perks, such as faster reload times, or even elemental abilities. Think ice lasers, bolt lasers or even acid lasers.

"Part of the draw of us doing a story on the moon is the idea of being more sci-fi than what we were already doing," Lopez said.

"Borderlands already has a lot of that stuff in there ... We're just trying to offer as many different fun ways to kill people."