Star Fox coming to Wii U, one of three GamePad-focused projects from Miyamoto

Share All sharing options for: Star Fox coming to Wii U, one of three GamePad-focused projects from Miyamoto

Star Fox is coming to Wii U in an all-new game — the first for a Nintendo console since 2005 — sometime next year, Nintendo game designer Shigeru Miyamoto announced at a pre-E3 event this week.

The new Star Fox, still in its early stages, is one of three new game projects that Miyamoto revealed this week that are designed to showcase the Wii U GamePad's features.

On Sunday evening, Miyamoto unveiled three new projects he'd been working on. All were designed to convince players that the GamePad can work in tandem with a TV screen for fun gameplay experiences players can't get anywhere else.

Star Fox was one of those experiments, and maybe the most traditional of the three. Players control the Arwing in flight and in combat, battling other ships and tanks. Fox's ship can transform into the Landmaster tank, where he can engage in ground-based battles. The new Star Fox will also have a new vehicle: a helicopter that can deploy a small robot attached to a tether.

During play, the TV screen shows what looks like a traditional Star Fox game: The camera follows behind Fox's angular space ship as he engages in colorful dogfights. On the GamePad screen, players get a view from the cockpit of Fox's ship. To play the game, players have to keep their eyes trained on both screens, looking at the larger battle on the TV and using the GamePad to aim and shoot with motion-sensitive tilt controls. (Players can swap the screens at any time, moving the cockpit view to the TV and the exterior view to the GamePad if they like.)

The combination of using both screens during play, controlling Fox's ship with dual analog sticks and tilt controls, is a bit awkward at first. It takes more dexterity and concentration than many Nintendo-developed games often ask of players right away. Miyamoto said that once players get used to the control scheme, however, they'll feel like they can't do without both screens.

Star Fox for Wii U is early, unpolished, which helps explain its tough to pick up controls. The game's graphics also looked far from finished; it's rare, and surprising, to see a Nintendo game this early in its creation. But the game is in full production now — now that Miyamoto seems happy with the game's basics. He said he hopes to finish the game within a year, and his team is looking to partner with an outside company to help speed up development.

"Obviously the game started off as an experiment," he said. "The way that I design games is I start by experimenting with a lot of assets and play styles, then once we have that all kind of understood, we go into full production and add graphics and everything else.

"I'm looking forward to being able to share more news about the game and the production of it before launch."

Miyamoto says he's directly in charge of the new Star Fox and explained why he decided to show it in such an unfinished state.

"Originally, we weren't targeting E3 for the announcement of Star Fox," Miyamoto said through his translator. "But in developing it, we really came to like it and I wanted to motivate ourselves to complete the game as quickly as possible."

In addition to Star Fox, Miyamoto unveiled two other gameplay experiments for the Wii U built around the GamePad: Project Giant Robot and Project Guard. 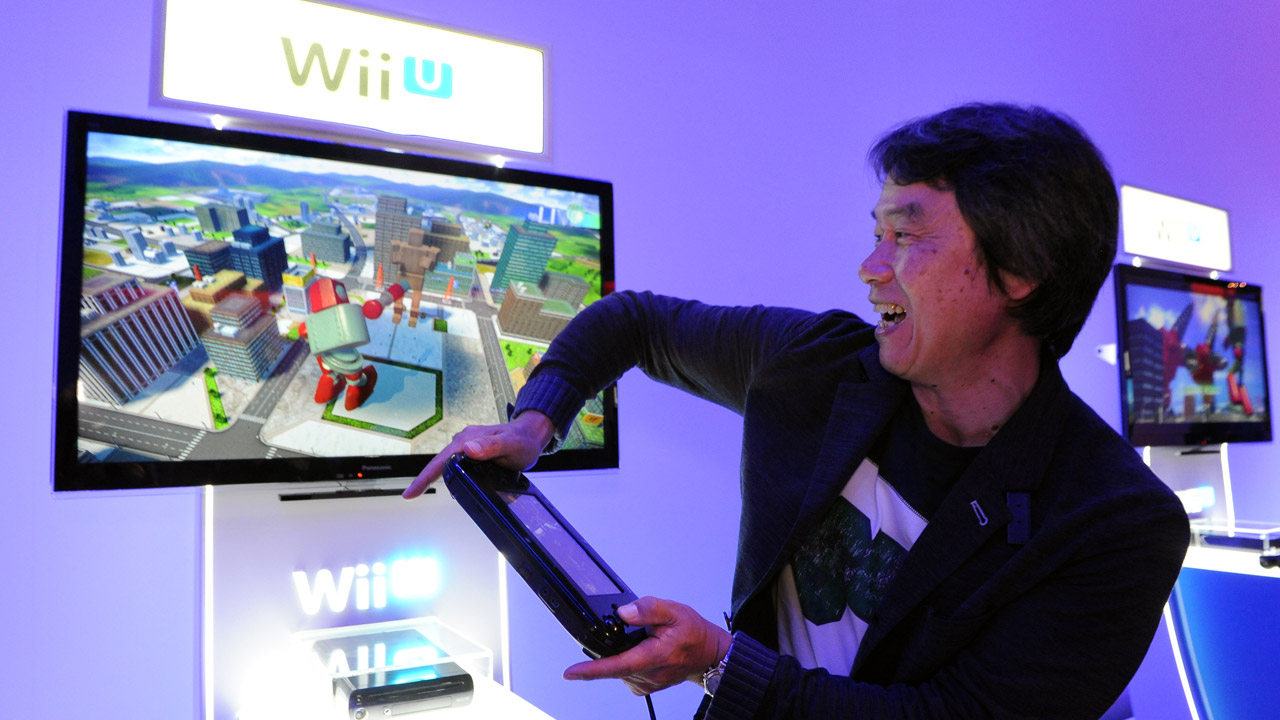 Project Giant Robot, as the name implies, puts you in control of a slow-moving, skyscraper-sized robot. The goal is to knock down an opposing giant robot (or giant robots) and making sure your robot doesn't fall over. The gameplay is simple: You walk your robot forward, then raise its arms with the GamePad's analog sticks, in an attempt to knock down your opponent. Tilting the GamePad forward or backward leans his torso in that direction, which you can use to balance the robot so it doesn't topple over. Like Star Fox, the GamePad offers a view from the "cockpit," or the robot's eyes. Using the first-person view of the GamePad, players can aim and shoot lasers at the opposing robot or at explosive objects on the ground.

In practice, that robot-on-robot combat is a slow-moving, clumsy and amusing affair. You perform excruciatingly slow punches and swings that make your bot look hilariously uncoordinated. It's a great deal of fun. You face enemies with names like the Box-Bot, a harmless wooden robot; Mystery Bot, a robot that bursts forth from a building; and the Bro-Bot, a trio of skinny robots. Some enemy robots are spindly, wiry things, while others are stout boxes with tiny legs. One enemy robot is constructed entirely of robot heads.

Your robot is customizable. You can build it from a variety of heads, torsos and limbs, all of which can be tweaked to adjust girth, height and length. You could build a squat tank of a robot, or something skinny and lopsided.

Miyamoto likened his giant robot battler to the sport of sumo. The rules of sumo are simple: essentially, whoever falls down first loses. The same is true of Project Giant Robot, making the game enjoyable for both players and spectators.

"It's a very simple style of gameplay ... Because the rules are simple and easy to understand," Miyamoto said, "it's easy for people to join in and cheer and support the players."

That same desire to have players and spectators work together comes through in Miyamoto's other game, Project Guard. The title puts the player in control of a series of security cameras and tasks them with defending a base from waves of incoming robots. Project Guard splits the action between two screens by showing a series of 12 camera feeds on the television screen and an overhead map, showing the layout of your security system, on the GamePad. 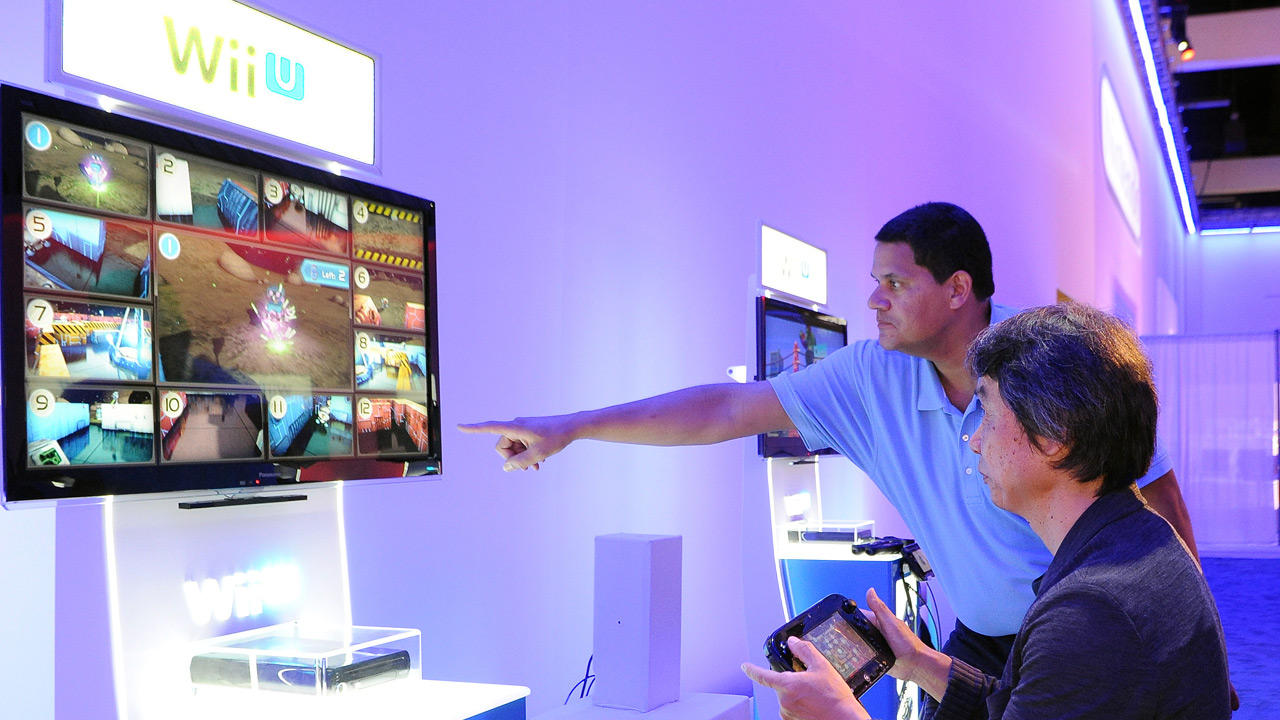 To protect your base, you'll have to look back and forth from the TV to the GamePad, looking for incoming threats and shooting at them as they work their way through the maze that leads to your base. There are a variety of threats to your base, including stealth robots that won't appear on the GamePad, bird-like robots that will peck at your cameras and UFOs that will take over your camera feeds.

Success in Project Guard requires not only careful monitoring of the two screens by the player, at harder levels, it's essential that you get help from other people in the room. When I played Project Guard on hard difficulty, I was bombarded by too many robots to keep track of. It was the shouting of other people nearby, telling me which camera had spotted a new threat. It was frenetic fun, and maybe the best of Miyamoto's three GamePad-centered experiences.

Interestingly, Project Guard's cameras held a clue about the game's potential future: Star Fox logos were plastered on each security camera. Asked whether Project Guard would be part of Star Fox, or related somehow, Miyamoto dodged the question but in such a way that we were lead to believe these games share a larger future together.

All three projects reflect Nintendo's desire to make Wii U owners — and new customers — believe that the GamePad is a crucial part of the console. Miyamoto's ideas make a good argument for that, even if we don't know when those ideas will come to fruition.