Oculus Rift is still a gaming headset first, even after Facebook deal

Share All sharing options for: Oculus Rift is still a gaming headset first, even after Facebook deal

The Oculus Rift was originally announced as a virtual reality gaming headset. The project was successfully funded on Kickstarter, raising more than $2.4 million of a $250,000 goal. Oculus Rift maker Oculus VR was acquired by social networking giant Facebook earlier this year, which fueled concerns that Oculus VR would shift its focus away from gaming. Speaking to Polygon at E3 today, Mitchell said Facebook has introduced Oculus VR to new ideas, but the headset is still very much intended for gaming.

"For us, we're all gamers, we're game developers, and if you look at our team, it's 90 percent industry veterans, so we have this big focus on games," Mitchell said. "We want this to be the best platform for VR games. I think, longer-term, we're all excited about the potential of everything you can do with VR, whether it's film or education or training or communication. Over time, I think you'll see more of that, but it's all really about games, and Facebook is excited about that, too." 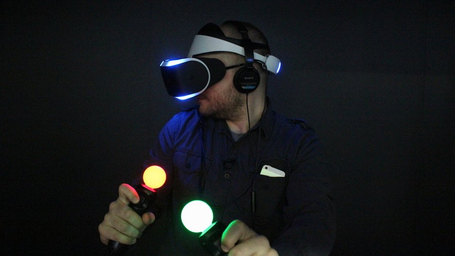 The Oculus Rift will control the future of VR, and that's just fine by Sony

Mitchell told Polygon that Facebook has been hands-off and hands-on "in the best possible way."

"Part of the Facebook deal is, ‘Here's a buffet of resources, take advantage of whatever you want.' On the flip-side, they've also been super proactive in suggesting ideas. So as we've gone and said, hey, we want to bring on Jason Rubin, or we want to build these studios, they've said 100 percent, go for it."

Mitchell and the Oculus VR team showed three game demos at E3 today to illustrate some of the game experiences the Oculus Rift supports: Super Hot, Lucky Tale and Alien Isolation. All the demos were short and in the early stages of development. In Super Hot, players try to dodge oncoming bullets by leaning from side to side and swerving their head. Movement is tied to time - when the player moves, time moves. If the player stands still, time freezes. When we played the introductory level, we were able to see the bullets as they came at us, lean to the side to avoid them, and turn out head to see them fly right past us. Hardcore mode was less forgiving: the shower of bullets was almost impossible to dodge.

Lucky Tale is a third-person 3D platformer where players control a creature named Lucky as he jumps on enemies and collects power-ups and bonuses. While at first it seemed unusual for a platformer to support the Oculus Rift, the headset made the game more immersive. We were able to peer to the side of and under platforms and cliffs to find more platforms and, according to Mitchell, in later levels players will be able to find hidden objects by moving their head and looking at the level from different angles.

Mitchell believes that if Oculus VR can do gaming right, then everything else will follow. The company sees potential for the VR platform to be used for storytelling and education, and if it can nail games and and their various tools and engines, then other industries will follow.

"If someone is going to make an educational experience of, say, going to Rome and visiting the Colosseum, there's a 90 percent chance they're going to use Unity, which is a game engine," he said. "So for that, that focus opens a lot of doors."