Hunt: Horrors of the Gilded Age wants to be a AAA co-op shooter that just happens to be free

Share All sharing options for: Hunt: Horrors of the Gilded Age wants to be a AAA co-op shooter that just happens to be free

Hunt: Horrors of the Gilded Age is Crytek's attempt to break into the North American free-to-play games market in a big way.

On the surface, the game seems to be modeled on Left 4 Dead. But if everything goes according to the developer's plan, Austin-based Crytek USA hopes to create a multilayered RPG with persistent, evolving and unique characters.

In Hunt’s lore, players are part of a loose association of international monster hunters in the late 1800s. Through a pre-recorded section of gameplay, played behind closed doors at this year’s E3, Crytek USA showed a group of hunters assaulting an encampment deep in the Louisiana bayou. They crept stealthily, heads down in a skirmish line, through low weeds toward a ramshackle village. When they opened fire the combat was bloody, hand-to-hand and intense. They cleared out a camp of burly cajuns, moved into a swamp filled with grasping zombies, and finally had an encounter with a powerful witch.

Each player character was unique. One, dressed as a gritty cowboy, wielded a suped-up shotgun and a brace of silver revolvers. Another, this one dressed in a flowing peacoat and sporting a top hat, used mystical occult powers to search the map for his quarry. A third let loose on the darkened forests with a powerful flamethrower. Melee weapons, like axes and knives, were available to get some distance when enemies got too close.

Crytek USA hopes that what will make the experience attractive for players is the level of customization it plans to build into the character creation system. 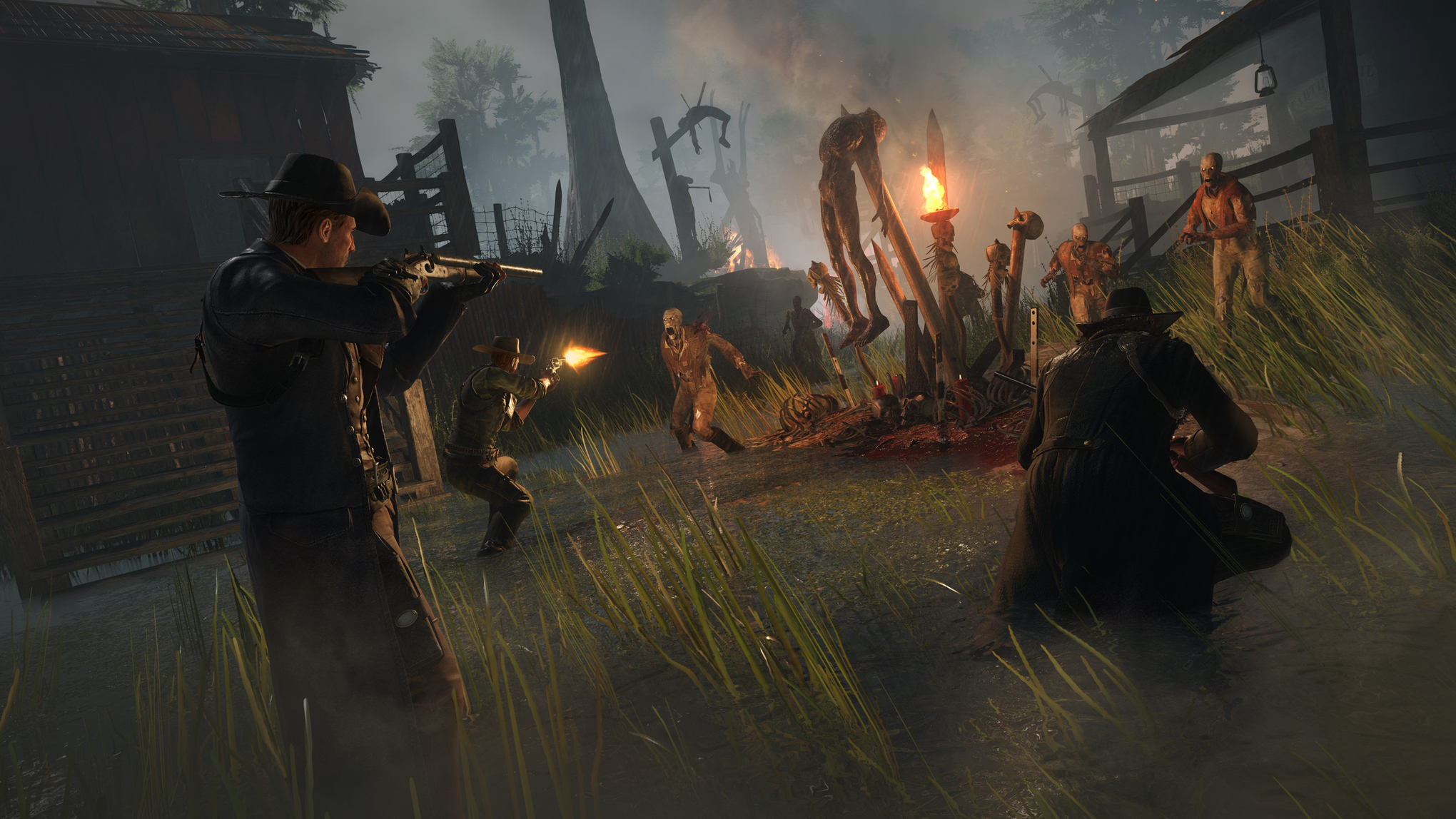 The team, many of which previously worked on Darksiders, said Hunt has only been in development for only one year. As such, none of the customization systems were ready to show to the press. Adams was even uncomfortable talking about the number and types of skills that will be available at release since they have not yet been locked down.

To keep the action fresh, Hunt plans to feature procedurally generated maps. No single environment will ever be the same. The game will also feature many unique boss creatures.

"We did a lot of creatures in Darksiders, a lot of bosses in Darksiders,’ said Ben Gabbard, the game’s producer.  [We wanted to] play to that strength, but always incorporate the co-op element."

Hunt, Adams says, has been designed from the ground up to appeal to Western audiences. "We’re making a game for North America. We live in North America. … It’s built with our tastes."

Unlike other free-to-play titles that hide game content behind paywalls, Crytek USA stressed the fact that it was designing Hunt to be the same size and scope as a AAA release. Their monetization model, Adams claimed, would be designed to provide an additive benefit. Players who want to will be able to pay for things like cosmetic accessories or experience buffs.

"From a development point of view," Adams said, "our philosophy is we’re going to make the games that normally someone would have paid $60 for, because that’s the experience that we want to create. And we’re going to give that away for free.

"There’s no artificial gates or time limits or impediments on your ability to play the game. That aspect of the game is free. And really, we spent most of our emphasis on that. That’s what we’re building."

Crytek USA plans to open the PC version of the game for beta testers in the fall, and is taking applications now at their website. Once out of beta it plans to make the game available on the newest consoles, including the PlayStation 4 and the Xbox One.