The introduction of the Sonic the Hedgehog franchise's newest villain — a 1,000-plus-year-old snake that clads himself in robot armor — is an extreme embodiment of everything the series has come to stand for so far, according to Sega developers.

Sonic Boom is the spin-off from the main Sonic franchise that takes place in an alternate universe. Producer Stephen Frost told Polygon the new games are essentially the ultimate evolution of the franchise's main conflict: nature versus technology. The struggle between Sonic and pals and his machine-loving adversary Dr. Eggman always comes down to running fast and smashing robots, but this time there's a new, badder baddie involved.

Lyric, the newest villain, will push the thematic struggle to its highest, a power-hungry mesh of organic creature and inhumane technology that keeps him alive just enough to be a colossal pain in Sonic's butt.

"I think that while it's only really been represented through characters in the past and the damage enemies have done to the world, in this one you can actually sort of see the devastation directly," said Bob Rafei, CEO and co-founder of Sonic Boom: Rise of Lyric studio Big Red Button. Lyric himself, kept alive for over a thousand years by fusing with inorganic steel, will be the epitome of this devastation.

"We were trying other creatures and the snake design really fit," Rafei added of designing the villain. "The timeless archetypal character, and wrapping the technology around him, having an augmented snake was something that was compelling for us and stuck with Sonic Team." 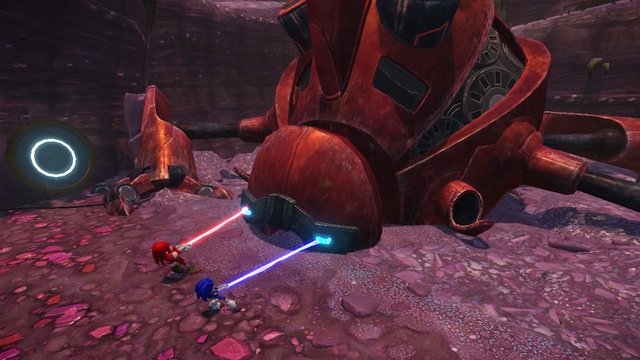 Rafei made parallels to the snake in the Biblical Garden of Eden for the decision to make the main Sonic Boom villain a snake. Snakes represents dark sides, evil things — the opposite of Sonic's can-do heroic attitude. This, as well as the modifications being done to Sonic and friends' designs and the addition of more complex combat have been done to build a true action-focused experience, Rafei said. Rather than make another Sonic game focused on running, Big Red Button wanted to make one that tasked players with being a little more skillful.

"Everything we've done with this product has been to service our goal of creating a cooperative action-adventure game," Rafei said. "To support the character adventure story, we felt that some were needed to make the characters' personalities more legible."

"I think we'll see more explorations like Sonic Boom in our industry as we age," Rafei said of the spin-off series, which he made clear to note was not part of the main franchise but rather another branch. "We're only 30 years old, really, and Sonic is a grandfather character that's been around for 20 years — when you look at the comic book industry it's been more than 60 years, and you have characters like Batman and Superman that have been around for so long. You see different takes on them throughout the cycles, and I think that's what we're starting to see here.

"I think it's a natural evolution for an industry that's growing up to do different explorations of characters," he added.

Frost also said that Sonic Boom stars a blue hedgehog that very much just wants to go at it alone. The game, Frost said, will open on Sonic going out on adventures alone, a thrill-seeker bent on taking down enemies on his own and faring solo against danger. But a close call that accidentally involves all of his concerned friends — Frost wouldn't share more plot details — forces him to realize that he can't go out alone — he needs to know when to ask for and let his friends help.

"We're taking a different approach to Sonic," Rafei said. "It was something people weren't expecting, but we're very pleased with the results."