Lords of the Fallen is a European Dark Souls, and I don't know how to feel about it

Share All sharing options for: Lords of the Fallen is a European Dark Souls, and I don't know how to feel about it

The biggest surprise in my look at action-RPG Lords of the Fallen at E3 2014 is that one of its creators has not finished one of From Software's Souls games.

"I'm a big fan of the Souls series," says Jan Klose, creative director at developer Deck13. "But it's just not 100 percent the type of game I would really play until the end."

This surprises me, because I've just played the E3 2014 demo for Klose's current project, Lords of the Fallen, and it feels exactly like Dark Souls. The control layout is identical — a heavy and light attack on the right shoulder buttons, raising the shield and parrying on the left shoulder buttons, dodging and gulping down potions on the face buttons. After hundreds of hours of Souls games, I'm able to pick up the controller and get right in without a second thought.

Klose calls Lords of the Fallen part of a trend of RPGs that "put realism on the forefront." This means there's a focus on immediate action — on timing weapon swings and dodging enemy attacks — rather than on stats.

"You can judge what's happening on the screen and understand it," Klose says. "A hammer is heavy, and if it hits, it will deal tremendous damage, but you need to time it correctly."

In demo of the game, I discover the importance of timing rather fast. The main character, Harkin, is equipped with a shield and a large halberd. I am able to do quick jabs of the weapon as a light attack or a choose a heavy attack with much more range and more damage-dealing potential but a huge wind-up time as well. I find my health being pinged down by the simplest enemies as I attempt to get used to the feel of the weapons.

Before long, I'm dead, but Klose says that's to be expected. "We didn't want to have this mainstream game where it's really easy, and everyone can play it, and it throws cutscenes at you," he explains. "We really wanted to have a challenging experience."

"There's only one difficulty mode," he says. "It's 'difficult.'"

Of course within that format, Deck13 still wants the game to be fair. "If you die, it shouldn't feel like a failure," Klose says. "We want you to try again and figure it out, not give up." He says the team is being very careful about checkpoint placement, to ensure that players need to accomplish something before hitting a checkpoint but also that they don't need to replay through an hour or more of gameplay if they die.

"There's only one difficulty mode. It's 'difficult.'"

Part of the trick to that balance is giving players options. Lords of the Fallen has three gear sets to choose between when you start the game, but players will be able to switch to a different style at will. Start out as a warrior but decide you like focusing on magic? Not a problem; just switch weapons and armor, fiddle with your stats a little, and you're good to go.

In my demo, I swap over from the slow halberd and an even slower hammer and decide to try a faster dual-wielded daggers build. Since I have no shield, I need to be much more active and dodge out of the way of enemy attacks. It works better for me, but I still have trouble managing my stamina between swings. Whenever I ran out of stamina, I couldn't dodge, which meant taking a hit. I made it a little further this time but inevitably succumbed to the aggressive enemies again.

For my next go-round, Klose suggests that I switch to a more middle-of-the-road, sword-and-shield build. "Our idea of approaching difficulty is letting you choose how you want to do it, what pace you want to do it, and even some ways out of sticky situations," he says.

One of those ways to escape tough areas is also one of Lords of the Fallen's biggest differences from Dark Souls: spells. Where the latter has spells that require strategy in execution, Deck13's approach is more about limited use but incredibly overpowered abilities. The spell I'm equipped with is a giant fireball. It can kill or nearly kill pretty much every enemy I run into in the demo. But I also am only able to use it twice before my magic bar is completely drained.

Klose explains that the developer sees this spell setup as a crucial part of balancing the game. Players can't spam spells and blow through an area with no problems, but they have the option to use them here and there if they're really struggling with a certain opponent.

Another big break from the Souls series is Lord of the Fallen's approach to story. Rather than creating and customizing your own tragic hero, it stars a single rather unlikable hero: Harkin.

"Prisoners in this society get sins tattooed on their faces," Klose says. "Harkin's face is covered in tattoos; he's really committed every sin there is." 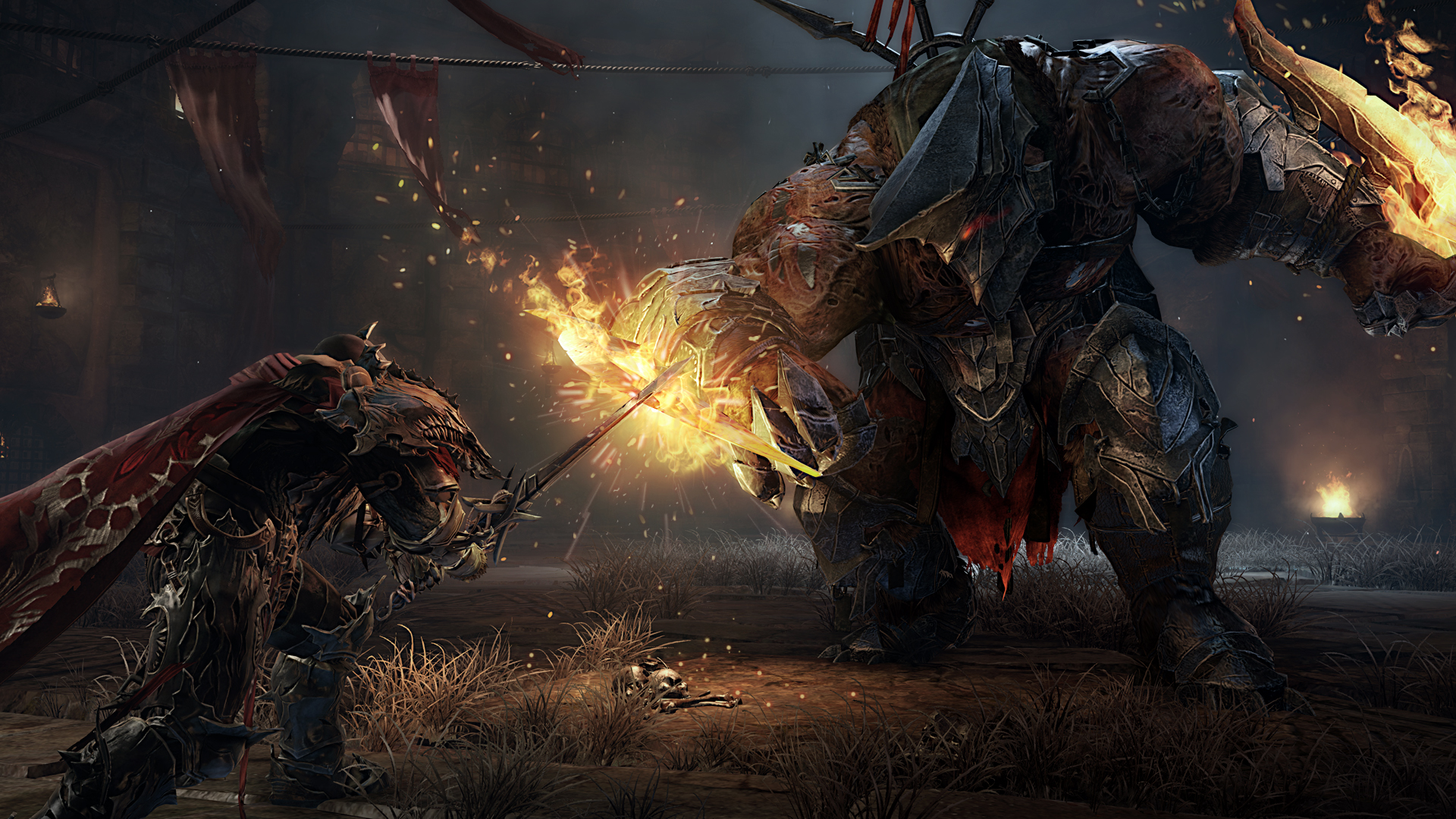 Players step into Harkin's armored boots just as he's pulled out of prison (along with all the other prisoners in the world) to help stop a monster invasion. Klose says the story only moves in one direction, but players will have a chance to make some choices that can change who Harkin becomes by the end.

"There's one straight storyline, but you can take different turns," Klose says. Players could choose to seek redemption, or they could accept Harkin as a broken, dangerous anti-hero.

Whatever you choose, the end of the game likely won't be the end of Harkin's story. Klose references the game as "the first installment" and hints that the studio may have plans for adding multiplayer into potential future sequels.

By the end of my demo and interview, I'm intrigued by Lords of the Fallen, but I can't shake the feeling that I'm playing something that merely emulates a great game rather than being great in its own right.

"I really love this genre," Klose tells me. "And I really regret that there are so few games that do it well."

I certainly agree with him on those points. But I'm not yet convinced that Lords of the Fallen will join that small list. We'll find out when the game comes out on PC, Xbox One, and PlayStation 4 this fall.

Lord of the Rings: The Rings Of Power will premiere with two episodes