Captain Toad: Treasure Tracker will make you fall in love with the mine cart level

Share All sharing options for: Captain Toad: Treasure Tracker will make you fall in love with the mine cart level

The brief, playable appearance of the plucky Captain Toad was one of the highlights of last year's Super Mario 3D World, where he provided a welcome change of pace from the standard Mario platforming action through a series of puzzle-platforming levels. Later this year, Captain Toad will star in his own Wii U title, taking a concept beloved in a half-dozen levels and exploring it further in a full game.

Captain Toad: Treasure Tracker will feature an all-new set of levels for Captain Toad to explore. Players will have to guide Toad through miniature mazes in pursuit of gems and stars, twisting and turning cube-shaped levels to solve visual puzzles. Captain Toad doesn't have many tools or skills at his disposal, since he can't jump or use traditional Mario power-ups to defend himself.

What Toad can do is fall. Gravity is at the heart of many of Captain Toad: Treasure Tracker's puzzles, and finding ways to put Captain Toad in the right spot, then make him fall onto a enemy or a collectible is how players will find success.

Captain Toad can also toss turnips that he's plucked from the ground, but it's not a particularly powerful skill. Mostly what Captain Toad will need to do to survive is avoid enemies and their projectiles.

In a pair of levels shown at E3 2014, Captain Toad walked and climbed through mini obstacle courses where enemies like Walleyes and Goombas attempted to impede his progress. The easier of those two levels looked like it was set in a Super Mario desert environment, while the other was set in a Luigi's Mansion-style ghost house. Success came from waiting for a pair of rotating platforms to line up and rearranging a series of moving doors by tapping the Wii U GamePad screen and walking to Toad's destination. This is a game where observation and awareness of your space in three dimensions rumps dexterity and timing. 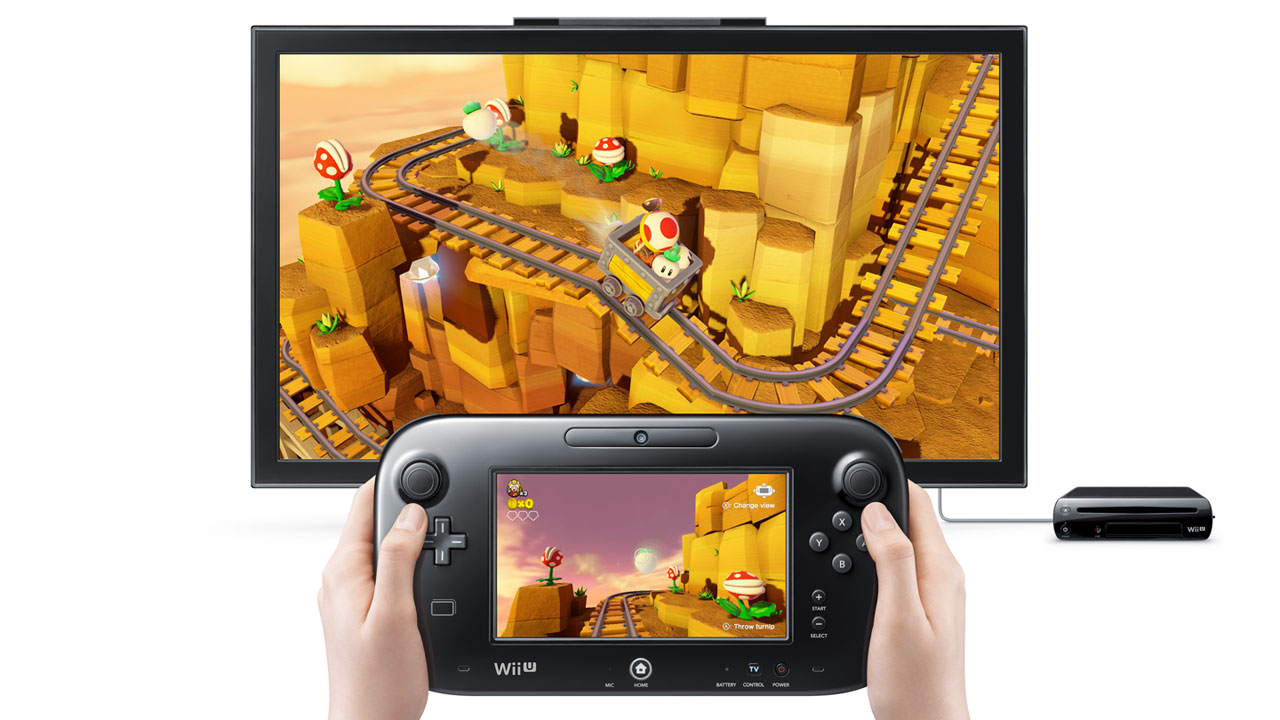 Nintendo will mix up the Captain Toad formula with a few variations on the existing gameplay. In one E3 demo level, Captain Toad engaged in a boss fight — really a one-on-one battle of careful avoidance. In the lava-filled level, the player has to walk and climb to the top by dodging a fireball-spewing dragon. A series of barriers which Captain Toad can take cover behind are his only defense.

In another level, Captain Toad jumps into a mine cart and sets off on an on-rails ride. The TV screen provides a third-person view of Toad's ride, while the GamePad screen offers a first-person view of the action. From the cart, Captain Toad can toss turnips at enemies like Piranha Plants and Para-Biddybuds, but also at gems — his only means of collecting them. POW blocks and bricks also hide gems within, so careful observation of both screens and looking around in first-person is paramount to success.

Captain Toad: Treasure Tracker's mine cart level reminded me a bit of the on-rails action in Pokemon Snap, just without the photography, so it wins points for tapping into that Nintendo 64 nostalgia.

As charming as Captain Toad is with his plucky attitude and excited chirps, it's difficult to say how well the gameplay will translate to a full game, particularly because we don't know what a "full game" is yet. The adventures of Captain Toad were a refreshing respite from Super Mario 3D World's more challenging levels, and those two or three minute single-player chunks may wear thin when presented over dozens of similar levels.

But Captain Toad: Treasure Tracker is a game Nintendo made in direct response to fan feedback of the beloved but powerless adventurer, so he's probably going to get the benefit of the doubt.

Wii U owners will get Captain Toad: Treasure Tracker sometime this holiday season.

Your Name director’s next movie hits US theaters in April

Support for Gwent: The Witcher Card Game is coming to an end