Under new management, MX vs. ATV: Supercross returns to its roots

Share All sharing options for: Under new management, MX vs. ATV: Supercross returns to its roots

When THQ blew apart in early 2013, its MX vs. ATV series was barely mentioned in the public fretting over what would happen to the children. Saints Row, WWE, Homefront — even what was to become Evolve — all of these landed in happy homes to public sighs of relief. The dirt-racing title, however, was effectively axed two years before, when THQ's chief mistake officers decided that firing a bunch of people would stabilize their plunging stock price. Thus, few noticed when Nordic Games, in April 2013, picked up MX vs. ATV, along with several unwanted franchises, for practically nothing.

Nordic reconstituted the game with those who originally built it — bringing back the core alumni from Rainbow Studios for MX vs. ATV: Supercross, coming to PlayStation 3 and Xbox 360 in the fall (with a Windows PC version to follow). Supercross is intended to be a return to the qualities that made the game fun. Its developers admit the handling still needs tuning, but I can confirm the graphics definitely look like something from 2012.

The visuals in MX vs. ATV: Supercross struck me as muddy — fitting, considering the sport. They're capable enough, but people will play this for what it is, not what it looks like. In gameplay, it's the challenge of taking the jumps in an order that doesn't break your momentum, speeding you through the course.

"In MX vs. ATV: Alive [the series' most recent entry], it was hard to get your speed and momentum going unless you could ride perfectly," said Ken George, the game's executive producer. "We're taking a more accessible approach, so we don't frustrate people." 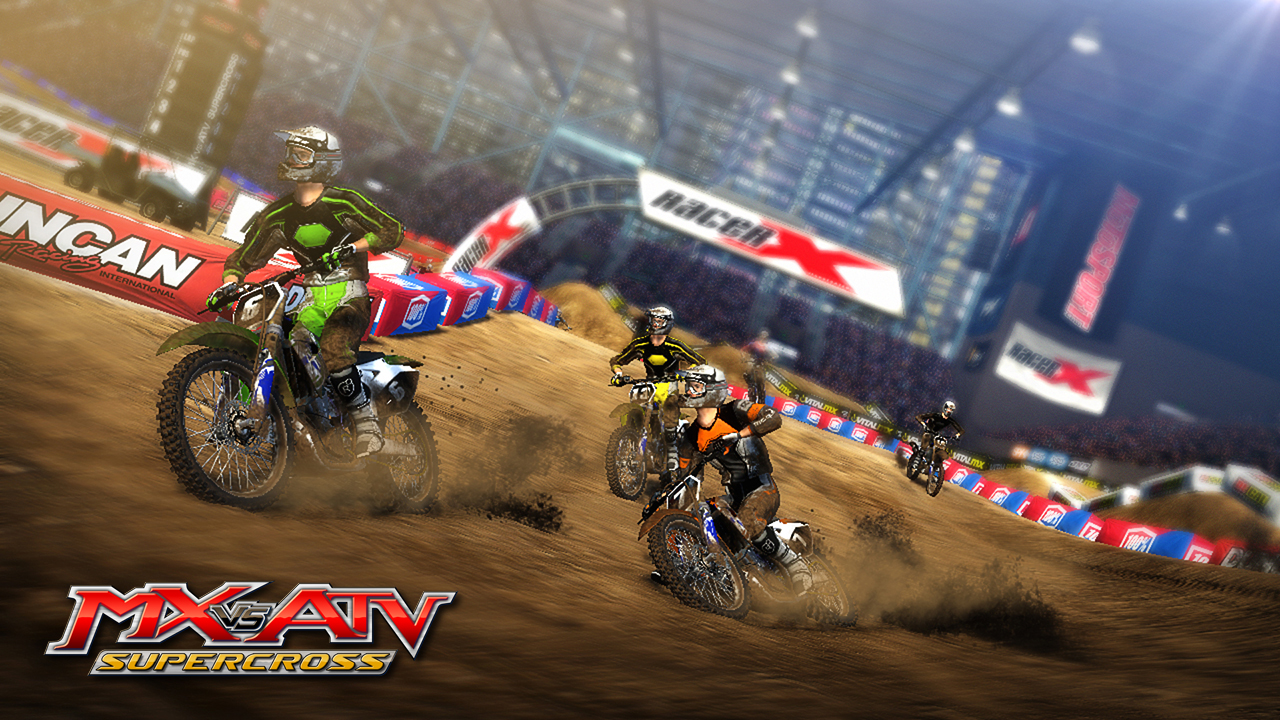 This means a return to the "rider reflex" controls of 2009's MX vs. ATV Reflex, in which the left stick turns the handlebars and the right manipulates the rider's body, leaning or pulling back as necessary to negotiate a turn.Pulling back through a series of small, washboard humps will also smooth out the ride through them. Leaning through a hairpin will cut a tighter turn than simply drifting. (There's a brake, but the developers readily admit few use it.) "Pre-loading" also returns; this is where the rider pulls down, then up on the right stick to launch himself higher and further off the jump.

Rider reflex is essential to taking any double, and especially any triple, in the game (clearing two or three hills). Leaning through turns is supposed to be more meaningful in Supercross than it was in Alive, I was told. It is to the point the bike felt unnaturally manipulable in mid-air, which caused me to go zooming off the track as I held the command after the jump. George said the team is aware of the floaty controls and will tune their sensitivity.

The clutch also plays a huge role in blasting your bike through the turns. You're not racing with a fully manual transmission, the clutch is simply there to idle the engine as the rider leans through a turn; then you dump it as you come out, providing a huge speed boost to get going again. It's a useful mechanism but, again, the boost I received definitely reinforced gameplay that is more arcadelike than simulation. In the pack at the start of the game, I bounced the bike off several riders to no real consequence; the physics are very forgiving in that regard. Crashes occured mostly when I over-leaned in midair and landed on one wheel.

MX vs. ATV hopes to make a smooth re-entry with more accessible gameplay.

I raced a couple of tracks, both of them in indoor arenas and one of them very technical (Indianapolis) and well out of my range of skill. MX vs. ATV: Supercross will feature refined terrain deformation, such that the ruts you carve (or are gouged out by other riders) hold up throughout the five-lap race. This is both advantageous and disadvantageous to the rider, as a rut can steer you into a launch trajectory you're not expecting, or don't want.

MX vs. ATV: Supercross has four racing series in its career modes: a 250cc West and East circuit comprising eight tracks, a 450cc championship using all 17 tracks, and an MX vs. ATV series that gets the four-wheelers into action. Online racing will support up to 12 human competitors. Licensed vehicles will be available as premium downloadable content; otherwise the base vehicles on the disc are generic bikes and ATVs in the various engine classes. Nordic was not talking about specific riders on the roster, but it will feature more than 60 real-world performers, so its safe to assume the top names in motocross will star in the game. George said many were brought into the studio to solicit their feedback.

"The approach is to go back to our most popular games, and what made them fun," George said.