Why some fans are battling with Notch over Minecraft changes

Share All sharing options for: Why some fans are battling with Notch over Minecraft changes

Around the world, millions of people enjoy playing Minecraft, one of the most successful video games of all time.

But an argument has broken out between Mojang, the maker of Minecraft, and the many companies and people which host Minecraft multiplayer servers, and who charge for their services, which include creating game-worlds and play modes based on the game, as well as the sale of in-game items and currency.

Mojang points out that its End User Licence Agreement (EULA) prohibits third parties from profiting from Minecraft in ways that it does not approve. This is an entirely ordinary position for any IP owner to take.

However, Mojang did nothing to stop these servers from making a profit for years. Only now is the company threatening to back up its EULA. This has upset a lot of server owners, who often employ helpers and developers and have invested heavily in the sale of items that will be banned, when the EULA is set to be more fully enforced in August. 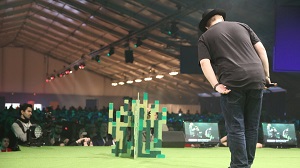 Part of Minecraft's charm, is that the game was created by a small group of passionate people, who care about their product and about their community.

Mojang and its leader Notch have generally taken a high moral position on issues like modding and community sharing. They have sought to represent the indie ideal; to be an antidote to the lawyer-accountant complex that runs many large games companies, and blights both the quality of their output and their interactions with gamers.

So, it's a surprise to see the company being insulted and scolded on forums. Notch this week posted a blog update defending himself from the accusation that he is "worse than EA."

Polygon put some of the arguments made by his critics to Notch, via email. He initially replied that our questions were "hostile", before answering with a series of one-word replies. Clearly irritated, he posted the email exchange to his Twitter account. Later, he clarified his position.

"The rules didn't allow for people to sell anything (including cosmetics) for years before someone noticed they were breaking the rules. They asked us if the rules really said that. We said yes, that's what the rules say. People got upset.

"We had a meeting and all agreed people running servers is a very important part of the Minecraft community, and that it costs quite a lot to run these, but that none of us wanted Minecraft to be a game in which you sell gameplay. To me it's extra important since we have so many young players. To make it easier for servers to survive legally, we clarified that you can absolutely pay for access, and added new rules that permit selling purely cosmetic things that don't affect gameplay. We avoided defining this too closely since what is "cosmetic" or not varies heavily depending on what kind of server rules you're running.

"We haven't taken down a single server, ever. The only thing we're doing now is clarifying the rules when asked about them, and adding new legal options to charge. I think this is blowing up now because some server hosts are becoming large companies that obviously want to do things legally, and when they find out they've based their business on something we don't allow, they get worried."

Mojang this month announced that any servers hosting Minecraft games, mods and communities must abide by certain monetization rules.

The rules allow anyone to host a Minecraft server, and to take donations and fees for that service. But they cannot selectively charge variable access fees and they cannot charge for any items that can be used to a player's advantage. They can only sell aesthetic items, like costumes. But for most servers, their most popular packages (often called "ranks") include treats and goodies that do affect gameplay, though usually in small ways that do not unduly imbalance the game.

These servers are a big deal. Services like Mineplex, Hypixel, Shotbow and HiveMC all attract well over a million unique users every month. Thousands of other servers attract smaller numbers of dedicated users, from a few dozen players to hundreds of thousands.

Multiple millions of Minecraft players are enjoying the game on these servers. It's hardly surprising. Minecraft is all about empowering the player to be creative.

The servers compete ferociously to attract new players. They innovate with new Minecraft-based worlds, games and community features. Mojang does not see a penny of this revenue. But, according to the server operators, their services feed the game's enduring popularity and the fervor of its impressively dedicated community.

The server owners say that the new rules will drive them out of business, or massively reduce the services they offer to their customers. They complain that it is unfair to enforce rules that have been largely ignored for years.

"I'm sure we'd be able to make it work if we had to, but I genuinely believe this will be bad for innovation, and that a lot of smaller servers who are creating awesome content won't be able to cover their costs and will have to shut down," said Gregory Bylos, managing director of Mineplex, in an interview with Polygon. He added that some servers had experimented with the new rules, and been unable to make a sustainable business. Running servers, protecting them against attacks, creating new content, hiring moderators, it's an expensive undertaking, he said.

But isn't Mojang well within its rights to clamp down on companies profiting from its creations? After all, when Disney or EA move to protect their Intellectual Properties (Mickey Mouse, Battlefield etc.) few people make a fuss.

"Yes I think they absolutely have a right to ask that we run our servers in a certain way," said Bylos, who recently posted an open letter on the subject. "However, when what they're doing will harm their own community and an entire ecosystem of servers that has helped make them so popular in the first place, we have a responsibility to speak up and try engage them on it.

"Up to this point they have been very supportive and have shown approval for what we do; inviting us to exhibit and be on panels at Minecon etc. I explicitly talked through my server and ranks with their business team and they gave me the OK."

Bylos believes that Mojang is motivated by a simple desire to protect players from unscrupulous server operators, who prey on children and spoil the game, by doling out 'pay-to-win' treats, for a high price. In a recent blog post, Mojang founder Marcus Persson (aka Notch) said that , "I don't even know how many emails we've gotten from parents, asking for their hundred dollars back their kid spent on an item pack on a server we have no control over. This was never allowed, but we didn't crack down on it because we're constantly incredibly swamped in other work." 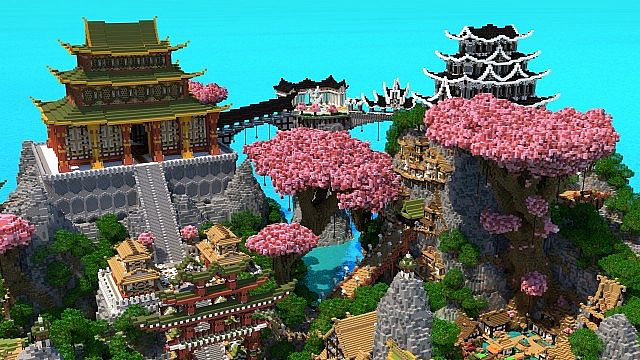 This leaves open the question of whether something has changed, freeing up the resources to allow Mojang to enforce its own rules.

"There are a lot of opinions within the community about Mojang's ability to enforce or even legal right to enforce since they've left it for so long, and in at least one case I am aware of, given written permission," said Bylos. "However, the majority of large servers want to make it work, we don't want to operate in a way that makes Mojang unhappy. We are genuinely trying to discuss and come up with solutions that will work for both us and Mojang, we just wish they would come to the table and talk to us."

Sam, a manager of leading server GotPvP (he declined to give his surname and asked Polygon to specify that he does not speak for the entire community) said that he had been talking to other server operators and "people agree that they likely will not change until they see Mojang taking action against servers."

"When they [Mojang] created the multiplayer capability of Minecraft, they could not have predicted that there would be people whose full time jobs would be running servers," he added. "There are servers with 10-15 people employed full time. Minecraft is always evolving and the donations and paid items were part of the evolution. To change what has been done for years randomly now just causes a ton of problems."

He said that many servers employ developers full-time to work on unique game modes and worlds, and that many would likely be laid off.

So what will GotPvP and its competitors do, if Mojang's lawyers come knocking?

"That's the question every server owner is asking," said Sam. "I think we could survive, but our quality would go down. I don't think we could have two full time developers as we do now. Our new game modes would probably be generic and not very unique, as we wouldn't have the resources to develop new ones. I would guess that we would only receive 60 to 50 percent of our current revenue if/when we implement the changes. I think we could survive, and we would survive because we want the community to live on, but we would not be able to serve the community on our server as we do now."

Stefan Gorski is a New Jersey-based owner of a small survival server called StompzCraft, which has been operational for three years. He has spent the last year working on a new service that is set to offer unique content. But the new edict is making him nervous about his project's future.

"We're 98% complete, but maybe all that work is now rendered useless," he told Polygon. "The EULA has always been a consideration, that it could all be useless. We could pivot to just cosmetic things but I am not sure that a new server offering only cosmetic things will succeed. I won't give up. I am still going to try." Gorski recently made a YouTube video outlining his position.

Although he describes himself as a loyal Mojang fan, he disagrees with the company's stance on servers. "As a player I have a choice of what servers I want to go to," he said. "If I think a server is pay-to-win, I can go somewhere else. There are servers that are pay-to-win, but there are also so many that are about having a great time, and their owners have put a lot of work and effort into providing that content.

"It's upsetting. It just kinda hurts. They are killing something that has created content for their game for years. I understand that they legally have control of that, but people are upset that it's happening now."