It’s been a brutal Long War.

What started as an experiment in playing XCOM’s most demanding conversion mod has turned into, for me, an obsession. I now no longer want to simply experience this mod, I want to finish it … and then beat it with its bloody stumps.

Recently I experienced both the highs and the lows of this mod, a conversion which adds new weapons, scenarios, soldier classes and enemies, and turns XCOM: Enemy Within into nothing short of a serviceable turn-based military alien invasion strategy wargaming simulator. 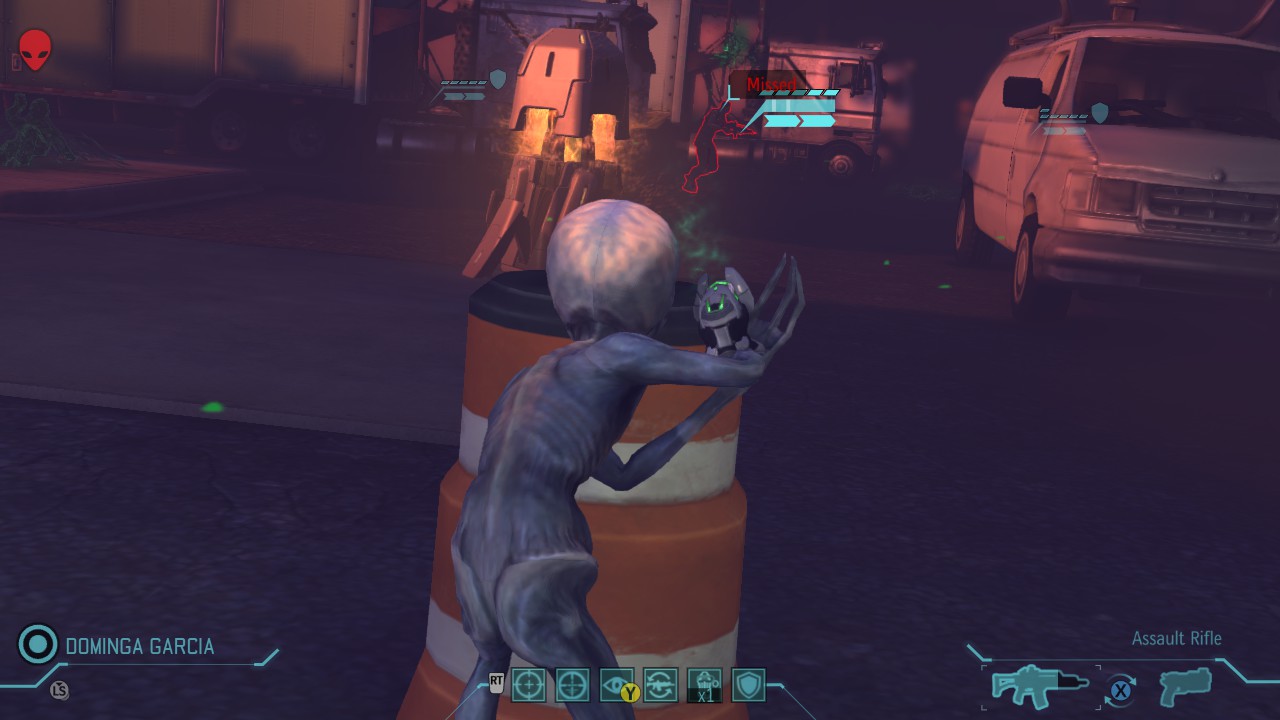 I’m roughly 50 hours into my Long War experience. I’ve been playing on weekends for the past few weeks, when I can. I am nowhere near halfway through the campaign.

I’ve had to sacrifice Africa (sorry), but all of North America and most of Europe and Asia are covered with satellites. In Long War, each satellite uplink grants only one satellite, with an additional satellite granted for "adjacency" bonuses. This makes launching satellites much more expensive and tedious, like everything in else the mod.

I’ve lost a couple of satellites to flying saucer attacks, but I’ve been able to bring new ones on at a rate of about one every 20 in-game days. So far I’m gaining.

Building workshops and laboratories to speed up research and construction is an ongoing project. Everything in Long War takes longer and costs more to build than in "vanilla"

So, in a nutshell, Long War is hell.

Put simply, the strategic game of ensuring satellite coverage and building the necessary base infrastructure moves much more slowly and requires much more long-term decision making than in the vanilla game. And training and maintaining soldiers has become a major part of the game.

The pace of Long War means many, many more missions than in vanilla XCOM. I’ve trained up around three dozen soldiers of various classes, almost enough to field any type of class assortment I want on any mission. But keeping those soldiers healthy and rested is an ongoing struggle, and I continue to train newbies to beef up my ranks — if they survive their first mission.

So, in a nutshell, Long War is hell.

Which brings me to the"Whale Level." If you’ve played Enemy Within, you’ll recognize this as the Council mission assigned after the reveal of the Chryssalid enemy. It’s one of that game’s most shocking and difficult missions, literally a "bug hunt" where the zombie-creating Chryssalids spawn from unexpected places and attempt to overwhelm you. It’s a challenge, even in the vanilla game. 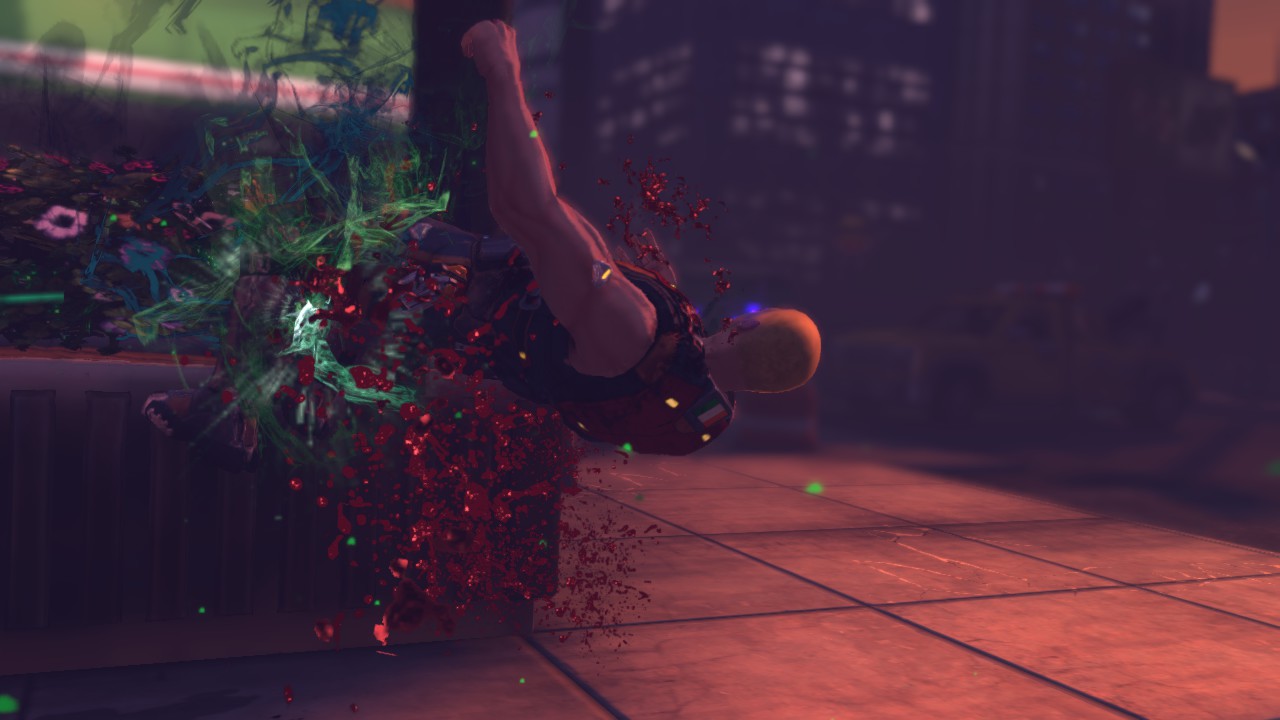 When I got this mission assignment, I couldn’t deal. I saved and quit for the night. After letting the idea of taking it on in Long War settle into something less than terror, I decided to give it a shot. Luckily, I had some good soldiers: A sniper LT and a medic, infantry, assault, gunner, rocketeer and engineer non-coms.

I want didn’t send any newbs or specialists, but I hadn’t yet gained the ability to build mechs or modify soldiers genetically. My best normal squad members would have to suffice.

The first wave of Chrysalids was about 11 strong. I almost quit right there, but I decided to go aggressive. The rocketeer and engineer managed to knock the entire Chryssalid wave down to half health in one turn, allowing the rest of the squad to knock out one half of the creatures, and then the other in successive turns. No one suffered so much as a scratch. It was lucky and brilliant.

I felt like the tide of the war had shifted in my favor. I felt invincible.

The rest of the assault went "by the numbers" as the ops officer would say. I reloaded from a save once after a controller slip left my assault soldier stranded on top of a box, where she was immediately swarmed by Chryssalids and killed. Apart from that, I played the mission all the way through, accomplished the objective, retreated in good form and won. Booyah.

Final tally: 37 Chryssalids killed. Casualties: two grave injuries, one minor injury. No fatalities. It was the best outcome I have ever had with that level, in any flavor of XCOM. I felt like the tide of the war had shifted in my favor. I felt invincible.

I was a complete moron.

The next day I learned what hard decisions are all about, in Long War. My satellites spotted a large UFO over the UK. I had one functioning interceptor for the continent. I sent it up, and it was immediately shot down. I should have saved it. One lesson learned. A harder lesson was still incoming.

The UFO landed. I sent a squad: An LT infantry and a medic, sniper, gunner and engineer non-coms. A rocketeer specialist and a newbie rounded it out. 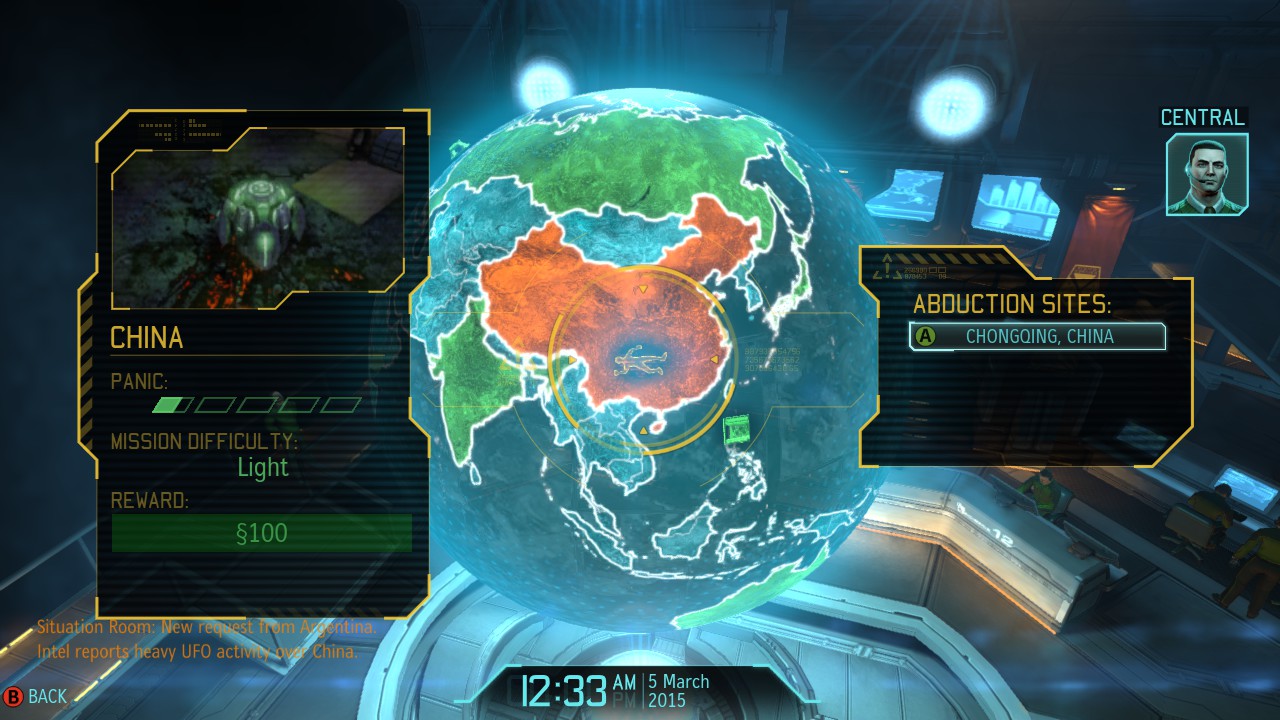 I figured, if a similar squad had beaten the game’s hardest level, this squad should be able to take a single UFO assault. This is the part of the story where I get my ass kicked. Turns out it was the "very big UFO" level.

Let me tell you: If, like me, you’re used to playing UFO assaults in XCOM, you will not be prepared for UFO assaults in Long War. The first time I tried to beat this mission I encountered a wave of Mutons around the left side of the ship. I beat them, and felt like a hero. Then wave after wave of Thin Men and Floaters ate my squad alive until there were only two members left. I’d only gotten halfway inside the ship.

I reloaded from the beginning. Same tactic, same result.

you will not be prepared for UFO assaults in Long War.

The next day I decided I had this level it figured out. After sleeping on the problem, I decided that the way forward was not through, but around. I’d skirt the outside of the ship using rocks and tress for cover and taking out the aliens as they emerged from hiding.

Good plan, Commander, I said to myself. (This is ironic foreshadowing.)

I reloaded from the beginning and went around the right side of the ship, where the Thin Men seemed to have come from the last time. I found them and took them out. So far so good. And then came more. And still more. But I held them. Eventually I ran out of outdoor cover and had to begin scaling the ship in order to advance. That’s when the Floaters came. But still, I held them.

My engineer took a bad hit and was down half her hit points. She was on point, and exposed by a flanking Floater. The newb, in a terrifyingly stupid act of bravery, charged out into the pen to get a bead on the Floater and took him out. And then another Floater appeared form nowhere and whacked him. The medic had to break cover and rush to save him, which she did, but by then the momentum was lost. 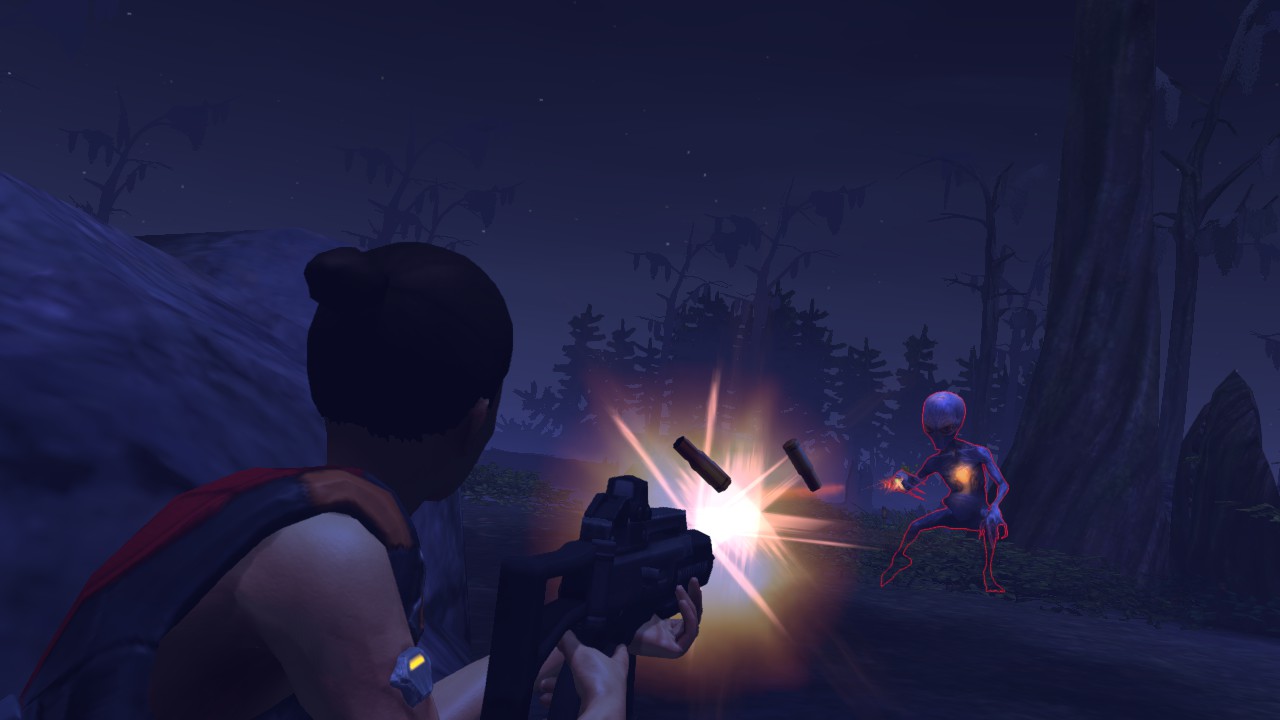 I was one gun down and the Floaters kept coming. Suddenly six more Floaters appeared out of nowhere along with, on the right flank, six of the squid-like Seekers. Three of the seekers went stealth and three advanced.

My LT infantry soldier took out two of the visible seekers on the next turn. (Infantry soldiers get a perk that allows them to fire twice in one turn. Nice, if you can keep them alive.) The gunner took the third Seeker. Meanwhile the medic (now all out of medkits) and the engineer advanced, and the sniper and the rocketeer (all out of rockets) took to high ground.

I was facing five floaters, two thin men, an entire wave of Mutons I hadn’t yet uncovered and — somewhere — three stealthed seekers. I was suffering, but I still thought maybe, if I could flank those floaters, I had a chance.

I did what I have never done before in XCOM: I refused the mission.

The next round, two of the seekers unstealthed up top, choking my sniper and my rocketeer. There was no one there to save them. The LT broke cover to run to their rescue, but he didn’t make it. By the time he got there he was out of ammo. He didn’t have time to reload and kill both Seekers. He would have to choose which soldier to save. And that’s when the third Seeker materialized and took the engineer.

I reloaded the game. After one more try and one more tactic I realized I didn’t have the soldiers or material to beat this level. Maybe it could be done, but I couldn’t do it. Not with what I had. Not without losing all or most of a squad. 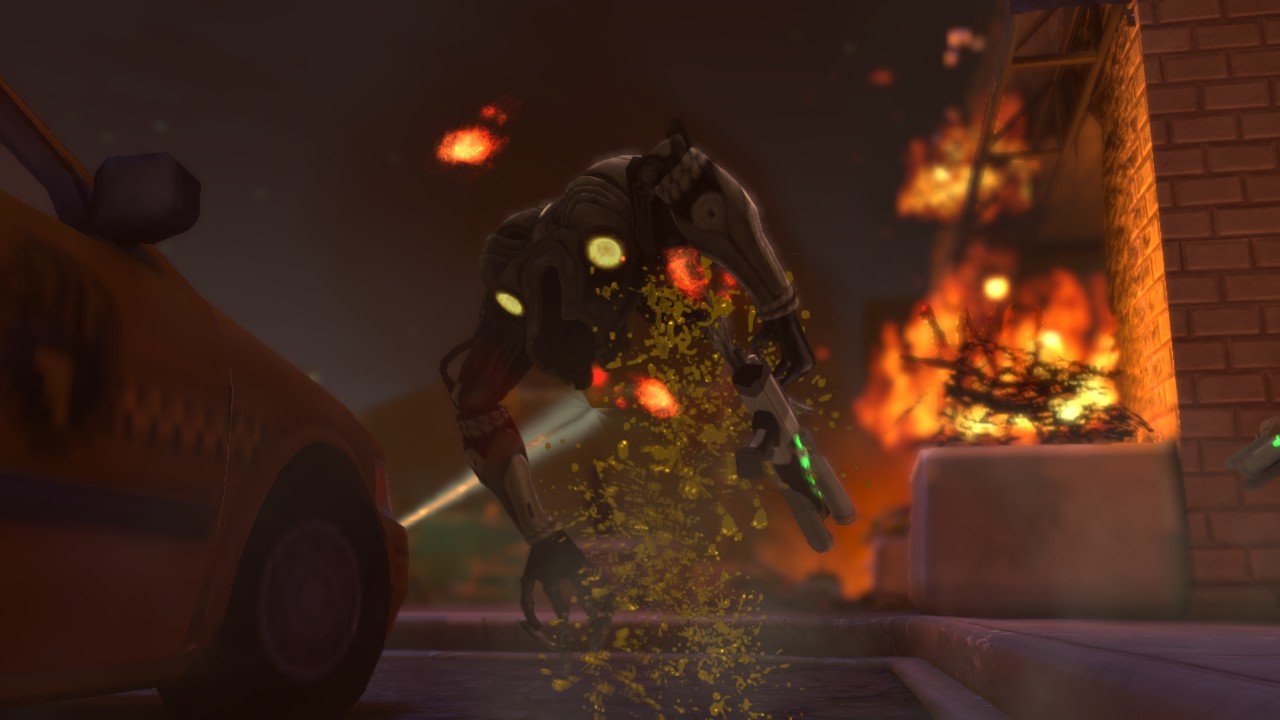 That’s when I faced the hardest decision I’ve ever had to face with XCOM. I could have accepted the loss of the entire squad, chalked it up as a learning opportunity and moved on. I’ve done this already in Long War, and I’ve regretted it ever since.

It was a retrieval mission that turned bad. I lost everyone but the undercover operative I was sent to rescue. I still remember it as an example of heroism and sacrifice. The squad gave their lives to bring their own guy home. It was awesome and terrible. The stuff war memorials are made of. But the result was a permanent depletion of force in a war where that sort of thing can’t be easily overcome. I lost "a lot of good men," as they say, and I still haven’t recovered.

Facing a similar situation over this UFO assault, I decided I had to take the opposite course. I reloaded the game to a save prior to the UFO assault, and then I did what I have never done before in XCOM: I refused the mission.

Somewhere in the UK an entire boatload of aliens is wreaking havoc on the local populace. They are probably cursing my name. But my XCOM force will stay strong and get stronger. And the next time the aliens come we may have a fighting chance at beating them.