Nintendo's Amiibo toys could save the Wii U, so why are they just coming out?

Share All sharing options for: Nintendo's Amiibo toys could save the Wii U, so why are they just coming out?

Nintendo's first dive into the lucrative field of toys as video games, the Amiibo, could have a "significant impact" on Wii U sales, said Nintendo of America president Reggie Fils-Aime.

"I think Amiibo can have a significant impact on driving the install base for Wii U on the sales of figures themselves," he said. "I think this could be a significant business opportunity."

So why did it take so long for the company to introduce its take on toys that can be uploaded into video games?

It's been nearly three years since Activision released Skylanders, the first massively popular toy-driven console game to hit the market. Since its release in 2011 Activision put out two more Skylander games, and a third is on the way. More importantly, the franchise sparked a massive cottage industry of toys and merchandise: There are 175 toys currently available for the games, and there are also about the same number of licensing and product partners.

The popularity of the franchise, and the money it's pulling in for Activision, attracted a lot of attention. It also seemingly sparked a similar push from Disney with the release of Disney Infinity. Disney Infinity 2.0 is due out later this year.

But for some reason Nintendo remained silent. That silence was puzzling considering that the Wii U's GamePad features an NFC reader that seemed designed to work with such toys, that Nintendo was in need of a breakout hit for the Wii U and that two years ago a video leaked showing off a Ubisoft game using the tech on the console.

So why did Nintendo wait so long to release a similar product for the Wii U?

"One, we wanted to be thoughtful in our approach," Fils-Aime said in an interview with Polygon. "In our view, going down this path you have to have differentiation.

"Second, we wanted to make sure that we would launch the concept with a big franchise, and certainly Smash (Bros.) fits that bill. Smash is really perfect. All the various characters, the gameplay that Mr. Sakurai has created is fantastic. So for us it was really making sure we had the right approach and the right method to launch it."

Another differentiator is that unlike with the competition, the Amiibo won't need a separate portal or NFC reader because the capability is built into the GamePad.

We first saw that in action in 2012, when a leaked in-house video for Rayman Legends showed players using toys to give their in-game characters more health or even potentially adding new characters to the game.

While Fils-Aime declined to say if any third-party developers were actively working on their own take on Amiibo, he said it was certainly an option. 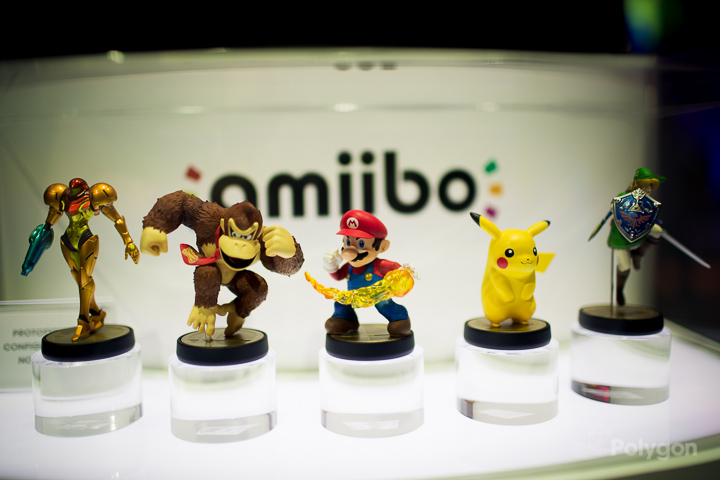 He also declined to say how that first round of Amiibo would be released. For instance, would any come with Smash Bros.?

"We have nothing to announce at this point," he said, adding that the plan now was to launch Amiibo at the same time as Smash with "about 10" figures.

"We will continue to make new figures available through the balance of holiday 2014 and then we're going to continuously launch new figures throughout 2015," he said. "For us, we're not putting a numerical limit on how many varied figures we can launch. Our potential catalog of figures in the space is quite broad."

That's because, he said, they're based on characters from the Nintendo universe that have tremendous popularity.

"Even a figure like Marth, which, from a broad population, may not be well known but for that Smash playing audience, they know Marth," he said. "A lot of them enjoy playing as Marth. And then we believe that, given the lineup of figures, we're going to have a more diverse ownership base, not only male and female (because of Peach and Yoshi that appeal to girls) but also from an aging up standpoint because people are going to want to collect Samus. You're going to have people who want to collect Link, all these fantastic characters. So we think our footprint is going to be much larger than what the other people in this space have been able to accomplish."

What Nintendo isn't doing for its toys-to-life approach is creating a standalone game, a big difference from both Disney and Activision's approach. The Amiibo are designed to allow players to drop characters into a variety of games, and level up their toys.

"What I would tell you is that we do believe the cross-game play is a big advantage for us," he said. "And having a Mario figure that could be potentially used in not only Smash Bros. but also in Mario Kart as well as in Mario Party 10. We think that's a pretty strong competitive advantage.

"The specifics of the gameplay will be unique to the game, and it is really up to the developer to program. So you will have a developer create a mechanism like what Mr. Sakurai is doing, where it really is a leveling up mechanic. And you'll have other developers taking different approaches. You might have a developer decide, you know what, I want to reward someone who has purchased multiple Mario games, and that really has given Mario uber powers. That's the way he'll program it."