2014 World Cup arrives on Xbox One with Destination Brazil

Share All sharing options for: 2014 World Cup arrives on Xbox One with Destination Brazil

Microsoft wants to make the Xbox One your go-to platform for experiencing the 2014 World Cup, whether you're watching the matches or highlights from them, playing video game soccer or following real-life soccer stories.

The company is tackling that mission with a multi-pronged effort presented in a new hub, Destination Brazil. Arriving June 12 on the Xbox One dashboard, just in time for kickoff, Destination Brazil will be led by an app called Brazil Now that augments the experience of watching World Cup games on TV. The hub will also feature Every Street United, a new reality TV series that's part of Microsoft's slate of Xbox Originals programming. And Microsoft has built other partnerships for Destination Brazil as well. EA Sports' FIFA 14 and its World Cup content for FIFA Ultimate Team are highlighted in the hub, along with video content from Copa90, a leading soccer-focused YouTube channel.

"What we're trying to really accomplish is a single destination that brings you the best way to experience these experiences with football — football or soccer, depending on the market you're in," said Matthew Reid, senior product marketing manager at Microsoft for Xbox sports experiences, in a phone interview with Polygon last week.

Similar to the NFL on Xbox app that launched with the Xbox One last fall, Brazil Now is designed to interface with the act of watching cable TV on the console through its HDMI pass-through functionality. With the Xbox One's Snap feature, Brazil Now appears alongside the live TV experience, providing real-time statistics and photos while you're watching a World Cup contest. You can customize the app to your country of choice to get information about the team's schedule, roster and more. And as in the Xbox 360's Election 2012 hub, Brazil Now users can participate in live polls during matches, answering questions like "which team do you think will win?" Partaking in the polls gives users cards that unlock team photos, and there's a leaderboard in the app for progress toward all 96 cards. 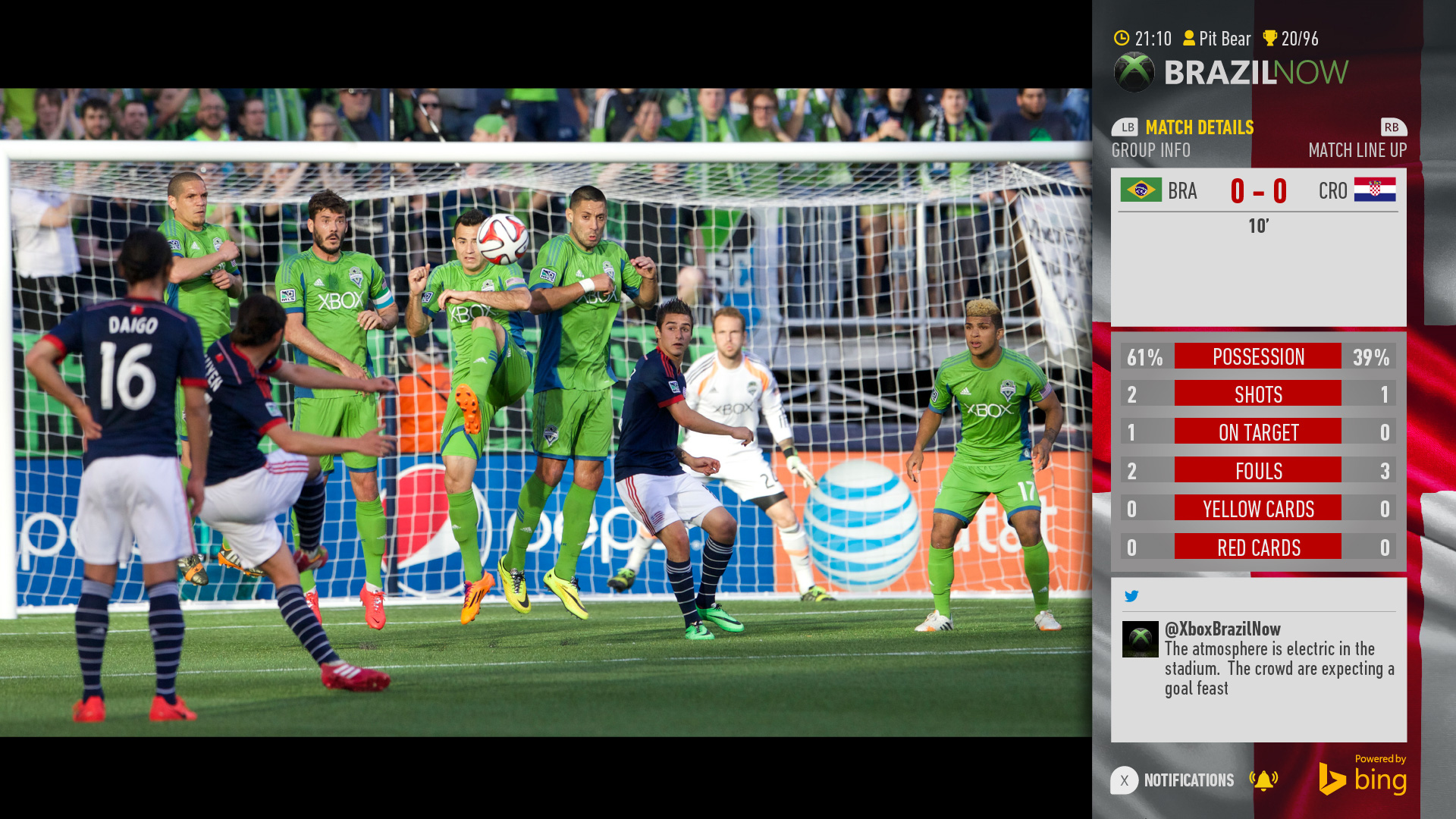 Brazil Now also offers useful functionality outside of live matches. Because of the data that's fed to the app, and its integration with the Xbox One's OneGuide, it knows when and where World Cup games will air on TV. It can provide notifications on the console about upcoming matches, and tune your cable box to the appropriate channel if you want to watch. This will also work with other apps outside of Xbox TV, for users who have the options through their cable subscription. According to Reid, "In the U.S., you could use the ESPN app to snap the Brazil Now experience against it."

As in other apps of this type, cable TV is the centerpiece of the experience. Brazil Now is designed to work with cable TV; it's designed for people who will watch the World Cup on cable, and who want an enhanced experience along with the games themselves. Reid explained that Microsoft is hoping the app will help to demonstrate the usefulness of watching cable TV through your Xbox One — and get more people to start doing it.

"What this delivers is an experience that you can then layer on top of the rights that you already have as a subscriber through your cable operator, or if you have an over-the-top partner," Reid explained. "Our real focus is the TV HDMI-out experience — we're trying to drive more adoption there — but it really is dependent on the end user's ability to have access and rights."

Destination Brazil will also direct Xbox One users to Every Street United, which will premiere June 15 and conclude Aug. 3. In the reality TV series produced by Xbox Entertainment Studios, soccer legends Thierry Henry and Edgar Davids travel to eight countries — Argentina, Brazil, Ghana, the Netherlands, South Korea, Spain, the U.K. and the U.S. — looking for undiscovered street soccer stars. Every Street United will follow the personal stories of the young players vying for the opportunity to compete in a four-on-four street soccer game in Rio de Janeiro.

The series will be available on multiple platforms through Xbox Video, as well as in its own app on Xbox 360 and Xbox One. The Every Street United app will feature a hidden object game for users to play. You can watch the trailer for the show above.

For Microsoft, Destination Brazil is about showing off everything the Xbox One can do: providing augmented experiences atop existing cable subscriptions, connecting soccer fans around the world, offering original TV programming and giving people more games to play — all focused around a truly global event that only comes around once every four years. And in accordance with Microsoft's upcoming policy change, nothing within Destination Brazil requires an Xbox Live Gold subscription.

"That's really how we look at the program," said Reid, "creating this overall mass of content and experiences we can put in one place for a point in time that really engages and rewards our fans."