Share All sharing options for: Costume Quest 2 is a treat for fans and shows how Double Fine does sequels

Double Fine's first real sequel, a follow up to 2010's Costume Quest, is coming this Halloween. The trick or treating role-playing game is essentially more of the same, another sweet adventure that seems aimed at treating fans of the first to what they've been asking for: more Costume Quest.

In Costume Quest 2, players once again take control of twins Reynold and Wren as they set off on a trick or treating adventure. They'll fight evil Grubbins in Halloween costumes that grant them superhuman powers. This time, however, the action moves to a new suburb in Louisiana. How they get there, we're not sure yet, as Double Fine is keeping story details under wraps for now, only explaining that the story takes place immediately after the downloadable add-on, Grubbins on Ice. But Costume Quest 2 is playable and still as charming as ever.

During a recent demo of the game, played on PC — the game is coming to Linux, Mac, PlayStation 3, PlayStation 4, Wii U, Windows, Xbox 360 and Xbox One — we got to see what Double Fine is doing for Costume Quest 2.

"It's probably our most requested sequel, besides Psychonauts," said Greg Rice, Double Fine publishing manager. "People have been asking for it forever. I think it's that every Halloween you're reminded about the game. We have a lot of people who are coming back to us saying they replay it every year."

"It's probably our most requested sequel, besides Psychonauts"

The vibe of the original Costume Quest, Rice believes, that nostalgic throwback to trick-or-treating as kids, is what resonated with players. For the sequel, Double Fine is looking to give fans of the original more of what they loved, while addressing some of Costume Quest's shortcomings.

One of the common criticisms of the first was its turn-based battles and how quickly they became repetitive. For the sequel, Double Fine is refining the battle system to keep players more engaged by adding attack combos and slightly changing the timing button presses in battles — players must now press the action button as their character strikes with their attack, not beforehand. The same is true for defending against enemy attacks. It's a small change, but an important one.

If players nail the timing on their attacks, they'll get an opportunity for a follow-up attack. And then a third.

In Costume Quest 2, players will have access to a wider variety of Halloween costumes. Some fan favorites from the first game are returning, but Double Fine is expanding the dress up options with at least four new playable costumes: the Clown, the Superhero, the Pterodactyl and the Candy Corn.

The Clown is a healer and can replenish the hit points of his or her teammates with a move called Laughter is the Best Medicine. The Superhero, styled to look like the superman of Double Fine's Middle Manager of Justice, attacks with big punches and can throw a bus for an area of effect attack. We're not sure what the Pterodactyl does, as it wasn't playable in our demo, but the Candy Corn does absolutely nothing. 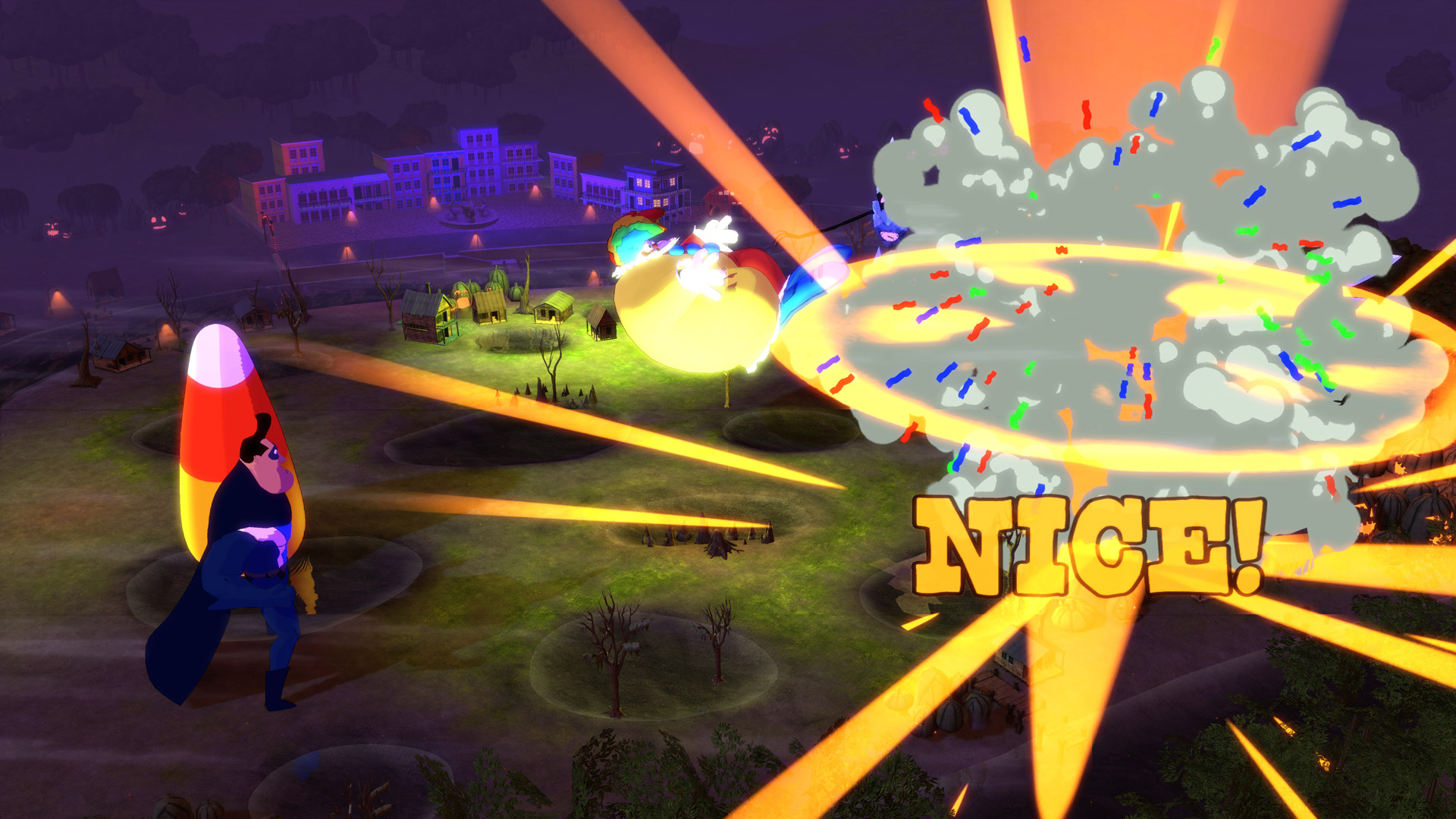 While the Candy Corn costume made an unplayable appearance in the first game, in the sequel it's one of your options. It's essentially useless, as the player wearing the Candy Corn get up simply sits out his or her turn — every single time. The only action is a message explaining the character's inaction, something along the lines of "Candy Corn has nothing to prove" or "Candy Corn decides to sit this one out." Double Fine hopes to have somewhere around a thousand variations on that line that explains why Candy Corn just stands there idle.

In fact, Double Fine has an achievement built into the game for players who wear the Candy Corn costume the entire game, limiting your party to two members, instead of three. "It's hard-corn mode," Rice said.

There are two other big changes coming to battles in Costume Quest 2.

First, your party's health won't automatically regenerate after each battle. You'll have to find water fountains to replenish your hit points between skirmishes.

Play as Candy Corn for a 'hard-corn' experience

Second, Double Fine is adding cards that players can use to enhance their battle abilities. Rice described them as a combination of the Battle Stamps — modifiers that each character could equip — and the collectible Creepy Treat Cards from the first game. Players will be able to purchase cards from vendors or earn them by completing tasks, and they can be used in battle to give you an advantage, but with limited uses. Some cards, Rice said, may take a few battles to recharge before they can be used again, forcing players to make some tougher decisions about using them.

In addition to tweaking how turn-based battles play out, Double Fine is working to improve the moments in-between, as players explore the world of Costume Quest 2 and undertake side quests. One big improvement is movement. In the original, most players opted to wear the Robot costume, as the outfit's roller shoes let players glide around at high speed. In Costume Quest 2, all the kids wear heelys.

As for side quests, Rice says that in the first game "a lot of those were a bit fetch quest-y, but in this one they're a little more [tied to] game mechanics."

One side quest we completed involved using the Clown's horn. The kids wanted to join a group of street musicians as they played some New Orleans-style jazz in the game's version of the French Quarter. But the band demanded that we rustle up an audience if we wanted to play, so, horn in hand, we chatted up a few tourists milling about. After drawing an audience with an ear for brassiness, the band acquiesced and let us toot along with their street jazz in a simple rhythm game. The reward? Candy, of course, and maybe a little street cred. 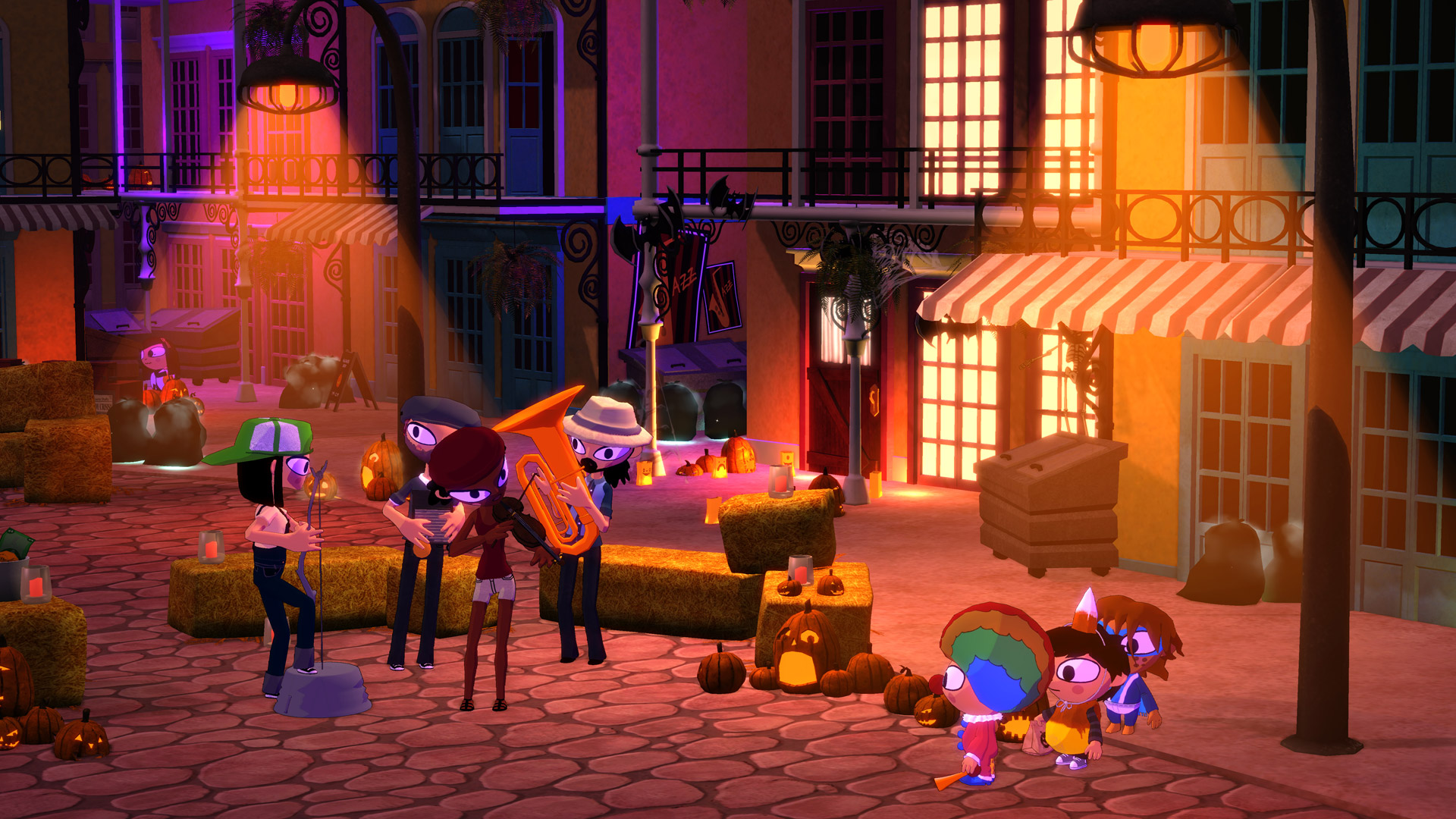 Between battles, players will also be able to hunt down hidden pinatas that are stuffed with candy. Rice said that if you beat up those pinatas rhythmically, they'll unleash more candy.

There are a bunch of little touches like that, mostly smart polish on the Costume Quest formula, that make the sequel look like a much stronger game. It's also a much prettier game, taking advantage of improvements to Double Fine's in-house engine that will draw upon the extra horsepower of new-generation consoles and modern PCs. In practice, that means much better lighting — crucial for a game set during Halloween, where luminarias and jack-o'-lanterns provide atmospheric lighting — and surprisingly nice looking water in the game's bayous.

Costume Quest 2 appears to be giving fans of the first everything they wanted: more Costume Quest, more warm-hearted nostalgia, better role-playing game mechanics and more sweet treats. It's also an important step in Double Fine's development history, where the developer feels comfortable and confident in treating fans to a sequel.