The Last Tinker: City of Colors left me with a dopey grin

The Last Tinker: City of Colors is just about the opposite of what I normally look for in a PC game.

It's a character platformer with a mascot-worthy star who looks straight out of the PlayStation 2's Jak & Daxter games. It's a game that really requires a controller to play correctly. And it's colorful and relaxing and all sorts of other warm adjectives that rarely cross my mind when I hunch over a mouse and keyboard.

For however much I might love wrangling with intense tactics or losing hours of my life to a complex game, The Last Tinker provided a breath of fresh air I didn't even realize that I wanted. It's more of a palate cleanser than a main course, but it's still satisfying and filling in its own right.

The Last Tinker casts you in the role of Koru, a stylish resident of Colortown. Everything in Colortown is built out of bright papercrafts, and the city is home to multiple races who each represent different colors — red lizards, blue bears and green.. cute... bunny-things. After some brief introductory levels, Koru is tricked into unleashing a flood of black-and-white paint known as The Bleakness onto the land. He sets out on a quest to visit the different districts and reunite the people of Colortown. 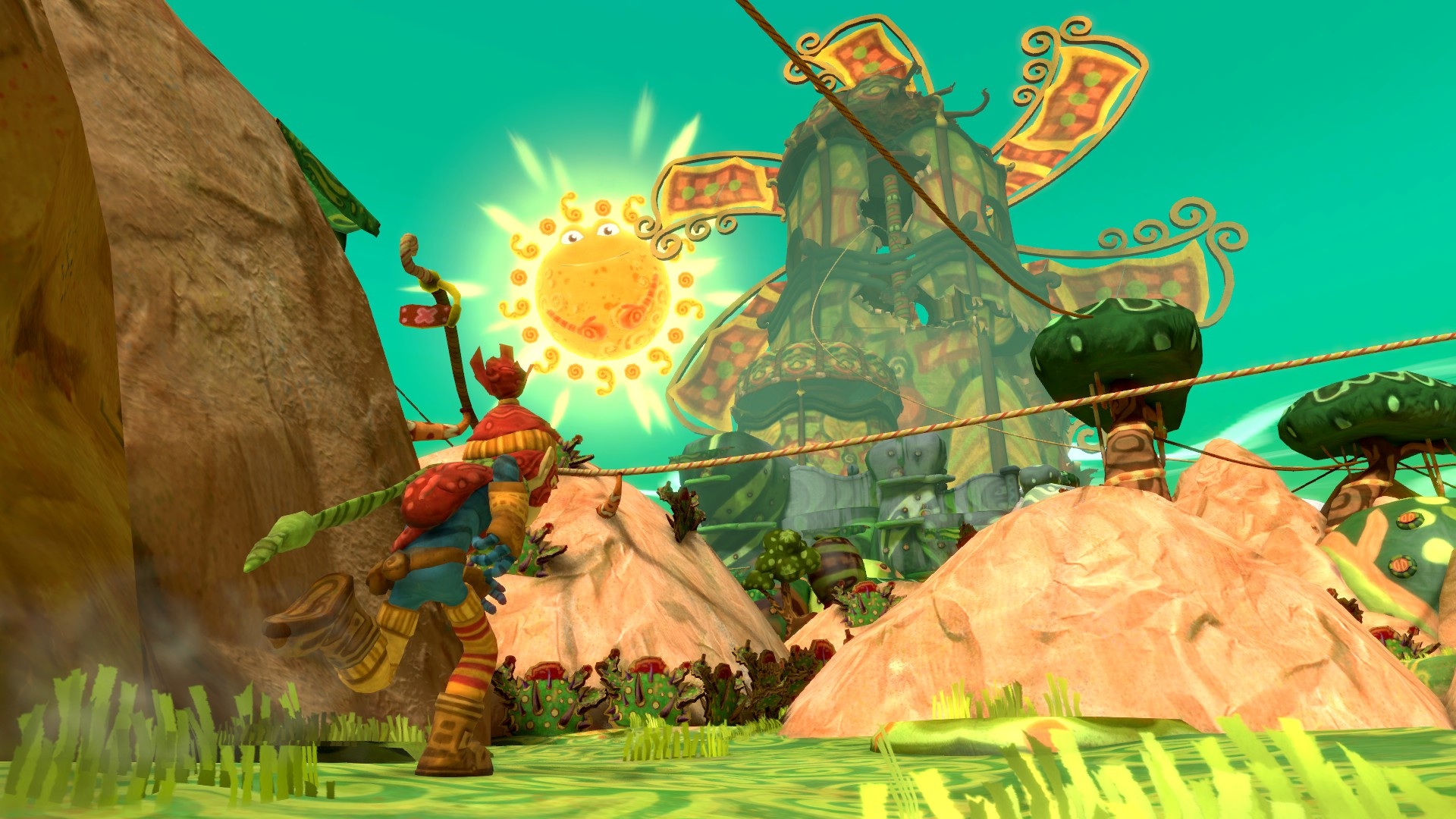 The plot is simple and silly, but the game embraces that simplicity. It doesn't waste time on lengthy cutscenes, and the voiceless dialogue can be skipped relatively quickly — though it's light-hearted enough that taking time to read it made me smile. But The Last Tinker recognizes that story isn't the pull of this game, and it doesn't lean on it too heavily.

In fact, you could say it doesn't lean too heavily on much of anything. Technically The Last Tinker is a platformer, but the jumping puzzles didn't cause me much stress. By holding down a shoulder button on the controller, Koru will leap from ledge to ledge gracefully without the need for pin-point precision. Occasionally, I had to time jumps to make sure I hit moving platforms, but even when I messed up, I was just warped back to a nearby checkpoint with one tick of health knocked off.

The challenge, inasmuch as it exists, is entirely in locating the paths to the next area, which means spending time scouring The Last Tinker's storybook landscape. Though it's split into distinct levels, this is not a hyper-linear hallway crawl. Each level stretches out in multiple directions, with plenty of hidden areas to access. Thorough exploration is rewarded with crystals — which can be used to purchase new combat moves — and collectible paintbrushes — which unlock concept art alongside some other surprises. These small bonuses were more than enough encouragement for me to spend time trying to find a way to every out-of-reach ledge I set sights on.

I enjoyed digging into these vivid levels from the start, but after the first few hours of The Last Tinker I started to worry that the game's shallow mechanics would get boring before long. Wisely, it expanded the breadth of things to do more so than the depth. In one area, I skidded along on rails, leaping from one to another to avoid obstacles. In another, I rode a rampaging creature down a multicolored highway, bursting through piles of Bleakness blocking my path. I was constantly stumbling onto new goals and more things to do to ensure I wouldn't lose interest — even if none of the gameplay ever went much deeper than surface level.

I wouldn't have guessed it from those early hours, but The Last Tinker's combat system is the most well-developed system in the game. Koru's enemies are smudges of Bleakness of various shapes, sizes and powers. At first his only defense against them is dodging out of the way of attacks and mashing a single punch button until they explode.

Combat is the most well-developed system in the game

As the game progressed, though, and as Koru gained powers from each of the districts of Colortown, I discovered a whole subset of options for each encounter. In addition to a full-on assault, I could make enemies run away in fear, freeze them in place and sneak behind them for a one-hit-kill or even stop time itself — a technique also useful for solving a few puzzles later in the game. Enemies also became more complex, with some protected by shields and others with the ability to summon in more enemies. These fights didn't require the mastery of a tough character action game, but the formula got switched up enough to hold my attention.

The Last Tinker: City of Colors left me with a dopey grin

Everything I'm saying about The Last Tinker: City of Colors may sound like faint praise, but I mean it in the kindest way possible, with the same sort of dopey-grinning enthusiasm that comes through in the game's tone. I'm not going to remember it years down the road for well-developed mechanics or brilliant level design; it doesn't have anything striking or memorable enough to make it a game of the year candidate. But if The Last Tinker's goal was to leave a smile on my face, it accomplished it every time I played.