Share All sharing options for: Lucky's Tale, and the untapped potential of third-person virtual reality games

Few people question the idea that virtual reality games work best in the first-person. If you can look around the world and react with your body, why not place your point of view inside the player-character?

Entering a new world as someone else is a very attractive thing for many people, and most games that are being built for the Oculus Rift and Sony's Project Morpheus take that approach.

I spent 10 minutes or so playing Lucky’s Tale during E3. The game is a sort of virtual reality take on 3D, third-person platformers like Super Mario 64. The game doesn’t allow you to see out of the eyes of the character as much as your eyes become the game's camera. You can look around the world, and peek around corners using the hardware’s positional tracking to see what’s coming next.

During one section where Lucky has to run over a bridge and avoid swinging logs I placed my head down and on the side, as if I was resting my head on a virtual pillow, in order to get the best view of the action and escape without being knocked off the side.

There is a moment where a small flying animal gets right up in your face and looks at you, and the effect is hard to describe. I wanted to swat at it like a mosquito. It was a distraction, and that was the point. It’s hard to focus on the action when there is a small insect demanding your attention in the foreground.

The demo has been stuck in my head like a thorn for the past week. The game's title screen is made up of the first level, meaning before the game even begins you can lean forward and study the area you’ll be exploring in the game. You can move your head in close to get a detailed look at every obstacle and jump.

This is where the positional tracking of the Rift development kit 2 shows its worth; your head and upper body become a way to get a preview of what you're about to do as you lean in and around the game's world.

This ability to move your head closer to the action and examine every part of the level and the character models from any angle changes how you see the world. Your view is not locked into any one position. You can look around to see where you’ve been, and then look in the opposite direction to see where you’re going. 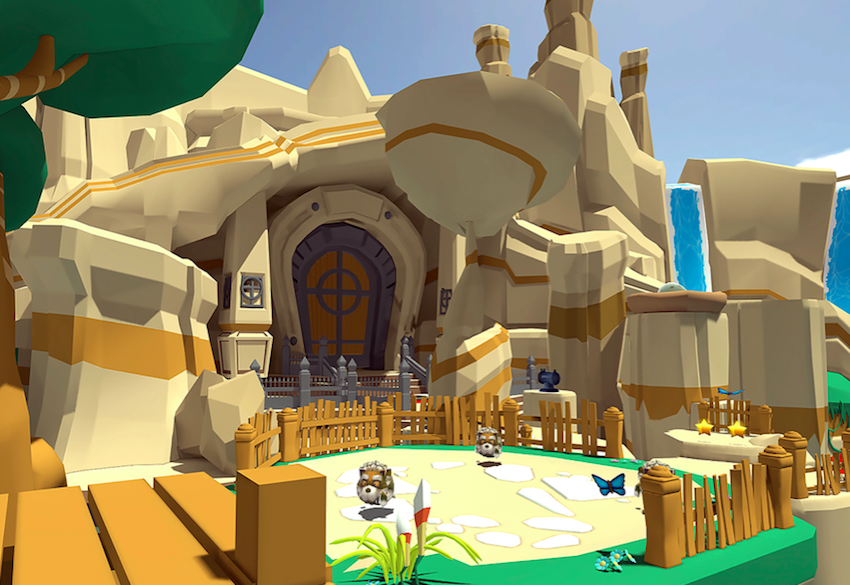 The "camera" is more or less your head, meaning you have a large amount of freedom to frame the action and to show yourself what’s going on from the best vantage point. It also means how the developer treats the camera has to change, and you must be given the freedom to move the camera in ways that don’t make sense in a traditional third-person game.

It’s hard to describe the sensation, but imagine playing with and around an intricate model train set. You can lean over the hills covered in fake grass to see the tiny people, or move your head closer to the little buildings to inspect the fine details. It doesn't feel like a game, it feels like playing with miniature versions of real objects.

You have to move your body to look around the world

The ability to move your head in any direction, including closer and farther from the action, fools your brain into thinking what you're seeing is real. That you're surrounded by an actual environment built out of real materials. It's a strange feeling in such a cartoony world, but it works. The sense of place and presence is unlike anything else in modern gaming.

Lucky's Tale is going to be a launch game for the consumer version of the Oculus Rift, and the game is being published by Oculus itself. It's being developed by Playful Inc., a new developer headed by Words with Friends co-creator Paul Bettner.

This is another company making a large bet that virtual reality will turn into a mainstream product, or at least that the Rift will sell enough to make a virtual reality platformer an economically viable product. Being inside a game of this kind is very hard to describe if you've never used the hardware, as the game sometimes feels like you're playing with physical toys way more than playing with a game. The sense of exploration and play is joyful, and the game changes the control scheme as you move your head to aim thrown bombs during one section.

Watching the lead character hop around in front or you, with the ability to examine him from any angle while controlling his motions, gives you the illusion of playing with a remote-controlled animated character. The tone of the game is changed completely due to being in virtual reality, and the result is intoxicating.

"Virtual reality — I mean truly accurate, comfortable virtual reality — is the most important thing to happen to interactive entertainment in decades," Bettner said. "I know it sounds like exaggeration, but it’s impossible to explain what this is like to someone who hasn’t experienced it for themselves. Your brain is convinced that you are somewhere else, that you are in another world. I have worked my entire career to get to this moment, to create something like this."

This was one of my favorite demos at E3, and it's definitely one of the few that have stuck with me in such brilliant detail. Everything about it felt fresh, inviting and new. I put my head down on the train tracks to watch the action, and saw the future.