Oculus: ZeniMax suit is a 'transparent attempt to take advantage' of Facebook acquisition

Share All sharing options for: Oculus: ZeniMax suit is a 'transparent attempt to take advantage' of Facebook acquisition

Oculus VR filed a response in federal court today to ZeniMax Media's lawsuit regarding the Oculus Rift, alleging that the company, by "deliberately misstating some facts and omitting others," is attempting to cash in on Facebook's $2 billion acquisition of the VR firm.

"ZeniMax's Complaint falsely claims ownership in Oculus VR technology in a transparent attempt to take advantage of the Oculus VR sale to Facebook," reads today's filing, which was provided to Polygon by an Oculus representative. The company also reaffirmed the holding of John Carmack, its chief technology officer who was formerly employed by ZeniMax at id Software, that "there is not a line of ZeniMax code or any of its technology in any Oculus VR product." Oculus, like ZeniMax, is requesting a jury trial to settle the matter.

Rockville, Maryland-based ZeniMax sued Oculus last month, charging the VR startup with misappropriating trade secrets in the development of the Oculus Rift headset. The official lawsuit was filed weeks after ZeniMax accused Carmack of providing technology to Oculus; the latter company responded by saying it would disprove those claims. According to ZeniMax's complaint, Oculus co-founder and Rift inventor Palmer Luckey — along with a half a dozen ex-ZeniMax employees who are now working at Oculus — are building the Rift based on years and millions of dollars' worth of ZeniMax's research and copyrighted code.

Oculus rejects those claims, and regards the timing of the lawsuit as suspicious: "Until the Facebook deal, and the perceived chance for a quick payout, ZeniMax never raised any claim of infringement against Oculus VR, undoubtedly because ZeniMax never has contributed any intellectual property or technology to Oculus VR."

In the sequence of events comprising Oculus Rift's history, according to ZeniMax's complaint, Carmack first connected with Luckey in April 2012, and received an early Rift prototype from him that Carmack and other ZeniMax employees improved upon. Carmack then gave behind-closed-doors demos of the "heavily modified" headset during E3 2012, after ZeniMax had told Luckey of its improvements to the device in a non-disclosure agreement. 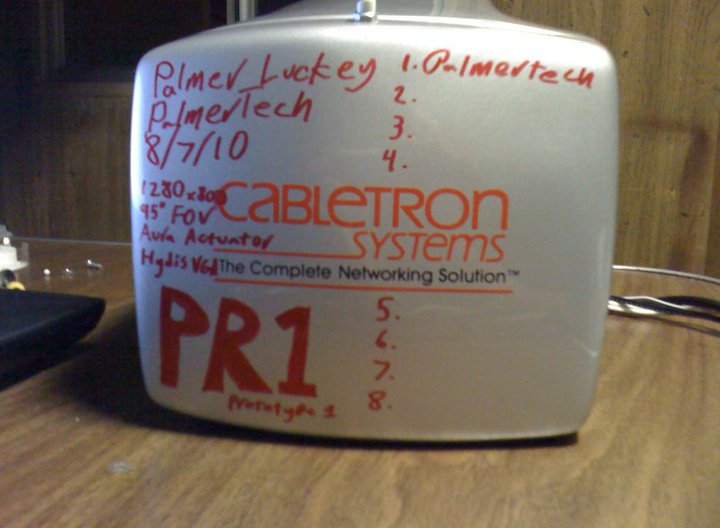 The way Oculus tells it, Luckey signed the NDA but the parties "never finalized" it. The document covered a "VR Testbed," software consisting of a small portion of a game that Carmack had adapted to work with head-mounted displays. And Oculus noted that any connection between Luckey and ZeniMax came about well after Luckey began developing the Rift on his own. Photos included in the court filing show off an initial prototype, "PR1," dated Aug. 7, 2010; the images themselves were taken Nov. 21, 2010 (see above).

Oculus also said that it continued to develop the Rift hardware as well as its software development kit (SDK), including an "ultra-low latency head tracking sensor" for the Rift's first development kit. The company said it developed "every hardware component of the Rift" itself, and added, "Throughout this painstaking development process, Oculus VR used no hardware or software technology from ZeniMax."

The filing also undertook a paragraph-by-paragraph reading of ZeniMax's lawsuit, with Oculus agreeing with certain statements in ZeniMax's complaint and denying most of the rest. According to Oculus, ZeniMax cannot be granted any judicial relief for its complaint, because it "fails to state a claim upon which relief can be granted."

In particular, Oculus wrote, "By its conduct, express statements, and silence, ZeniMax understood that the Oculus Rift and the technology powering it belonged solely to Oculus VR and that Oculus VR had not infringed any of ZeniMax's intellectual property rights or otherwise misappropriated any proprietary information of ZeniMax."

Oculus specifically denies ZeniMax's breach-of-contract claim because the company holds that the NDA Luckey signed was not a "valid and enforceable agreement." The misappropriation charges should be dismissed, said Oculus, because "ZeniMax's purported trade secrets were readily ascertainable by proper means." According to Oculus, the company's use of ZeniMax trademarks falls under fair use, or ZeniMax expressly or implicitly granted permission for it. Oculus ended by saying that if ZeniMax has suffered any damages, as the publisher alleges in the lawsuit, those damages resulted from the actions of ZeniMax or other parties aside from Luckey and Oculus.

We've reached out to ZeniMax for comment, and will update this article with any information we receive. You can see the full court filing from Oculus below.

Update: A ZeniMax representative told Polygon that the company has no comment on today's Oculus filing.

Every new movie you can watch at home this weekend