At first glance, Persona Q: Shadow of the Labyrinth looks like a love letter to fans of role-playing games Persona 3 and Persona 4, banking on the franchise's worldwide popularity to reach hit status. But once you peel back the layers of fluffy (yet entertaining) dialogue and the idea that this all looks like one big playable fanfiction, players will find a challenging, almost brutal game waiting for them underneath. Any worries that this is just a simple Persona skin for a dungeon crawler is mistaken.

Persona Q is an Etrian-style dungeon crawler in the vein of another Atlus-developed series, Etrian Odyssey. In these games, players explore yawning dungeons, navigating through them in small increments and combating creeping enemies that stand in their way. Combat occurs in first-person and the entire adventure is turn-based, forcing players to carefully measure out their steps as they work to clear away dungeons of all baddies.

In my hands-on time with the original Japanese version, I learned that Persona Q — which launched in Japan earlier this month — takes the whole Etrian idea and doesn't just make it with new characters. It recreates Etrian in a way Persona fans have come to intimately know and love, with Personas and typical series banter all included. 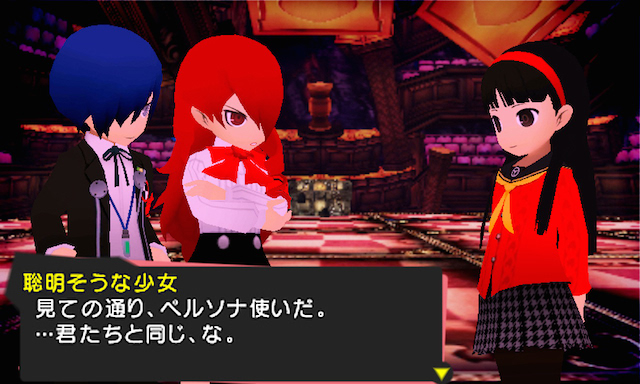 Combat in Persona Q is very similar to the Etrian games. Five fighters divided into a front row and back row take on enemies they randomly encounter in dungeons, as well as larger, tougher bosses. The particular Persona flair available in combat is, of course, Personas — physical manifestations of aspects of a character's personality that can be summoned to fight on their behalf. All characters have their main Persona from previous games with them, but additional sub-personas are available for equipping and swapping. Each character also has special attacks, such as the ability to heal the whole party or scout out an enemy's weak spot.

And like in Etrian games, the monsters aren't pushovers. My team was pushed to their limits as they repeatedly bashed a trio of opponents, only to immediately run into another set of monsters mere steps from our previous encounter. And as usual, the more times you use healing powers, the higher the cost of the spell, and players can only save as specific points in dungeons.

During my time with the game I got a look at a dungeon themed to look like the world from Lewis Carroll's Alice in Wonderland. The dungeon prominently featured checkerboard patterns, a smattering of strange objects stacked everywhere at an odd angle and some bizarre-looking enemies, like boxes with faces that had kitchenware floating in circles above their heads. Lots of dungeons hold to some kind of theme like this one, but there are also dungeons modeled after places longtime Persona fans will be more familiar with. The game's second dungeon, for example, is a group date café Persona 4 fans will recognize. 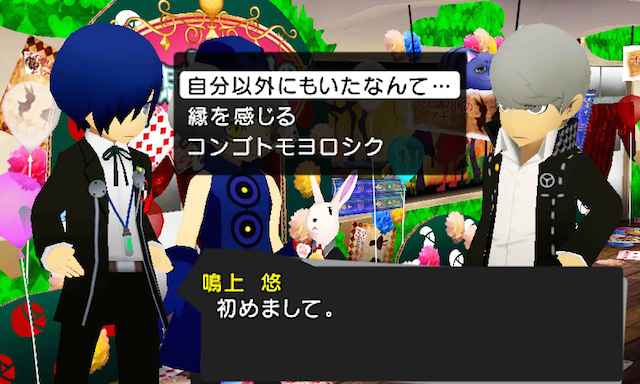 A representative from Atlus also told Polygon that the events in Persona Q are not a spin-off, but considered canon to this franchise. Any more details on this would be considered major spoilers. There are also two new characters which are never seen out of each other's company: Zen and Rei. These two cannot equip Personas... but again, this is plot spoiler territory.

Players may find themselves missing social links and the typical day-to-day activities from other persona games, but Persona Q presents a different sort of opportunity to get to know the game's guys and gals. Players will learn more about each character as they progress. This incentivizes gameplay somewhat, offering more personal rewards building up this cast of characters and feeding back into the story. Social links may be sorely missed, but Atlus is promising to make up for it with features that utilize the 3DS' StreetPass ability. Details on these abilities in the English version will be forthcoming as it approaches its release date.

As for completion time, players will get the chance to play through two sides of the story — one as Persona 3's cast and the other as Persona 4's cast. The two casts meet at the end of the first dungeon and mesh together for the second one, allowing players to build their roster choosing from both games' characters. The whole game is pretty meaty, with an Atlus representative estimating between 80 and 100 hours of gameplay.

Persona Q: Shadow of the Labyrinth will launch later this year for Nintendo 3DS.