Shovel Knight is the kind of game people write love letters about.

Shovel Knight is inspired by the past in all the right ways — but it's far from stuck in it.

Countless games have attempted to exploit our nostalgia for the 8 and 16-bit golden age, but none have cherry-picked the era's best attributes as judiciously as Shovel Knight. It's the stuff our childhood dreams were made of, assuming you dreamt of combining your favorite platformers from the '80s and early '90s into a single, streamlined package.

The magic of Shovel Knight is how it accomplishes that recombination without becoming derivative. The all-too-common praise for these sorts of modern-retro projects is lauding them as "the best NES game never made." Shovel Knight is, by leaps and bounds, the most authentic retro game ever made, and might actually be deserving of that designation.

Though tons of NES games make up Shovel Knight's DNA, the most obvious mechanical comparison is Capcom's 1990 platformer DuckTales. Shovel Knight's unique, titular weapon behaves like Scrooge McDuck's cane, allowing him to flip enemies, bounce over obstacles or unearth hidden treasures. Bouncing is really the main order of the day — it allows you to dispatch enemies without putting yourself in harm's way, and lets you cross gaps by chaining together head-stomps.

Simple as it may be, it's amazing how well that one mechanic has held up. Figuring out how to combo-bounce through an entire screen of flying enemies, killer spikes and projectiles is endlessly rewarding, which is fortunate, because you'll do it a lot throughout Shovel Knight's campaign.

Shovel Knight revives a lot of great ideas from the 8-bit era, but its biggest strength might just be what it leaves out. The (occasionally charming) obtuseness present in the games it draws from has been excised entirely — there's no repetition in its exploration, no confusion in how its systems operate. More notably, there's very, very little referential humor or retro-parody in Shovel Knight's writing, making it feel less like a cheeky dissertation, and more like a franchise that actually could have existed (and wildly succeeded) on the NES.

Those lovingly reimagined mechanics are bolstered by a handful of more modern designs that help Shovel Knight establish itself as more than just a retro knock-off. It has a novel, almost Dark Souls-ian take on death, forcing you to drop a large portion of your collected gold when you die, but giving you a single chance to get back to the scene of your death and reclaim your loot. It's a system that reinforces constant, challenging risk-reward evaluations — can you even get back to that point without dying again, starting that cycle anew?

The game's biggest achievement is how it has — no exaggeration — perfected the idea of checkpoints. If you ever find the distribution of checkpoints is making your playthrough too casual, you can, at any point, smash a checkpoint, granting you the huge pile of gold within. It's a huge gamble, as destroying a checkpoint renders it inert, ostensibly sending you way closer to the level's start point (and even farther from your dropped loot) upon death. Considering each level takes about a half hour to complete, that distance can become enormous. 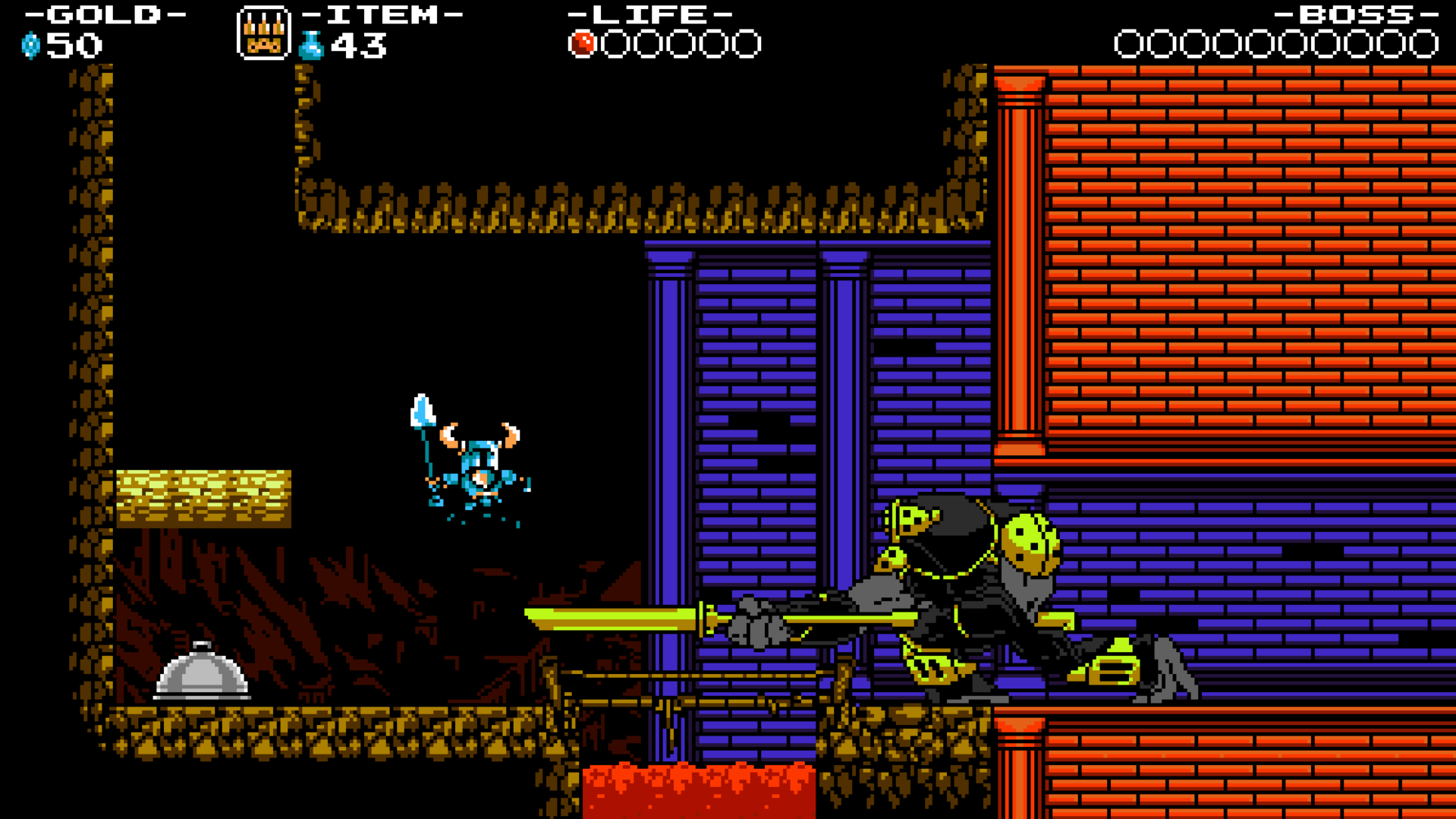 When Shovel Knight launches, it will include some, but not all of the features that were added to the game's feature list as Kickstarter stretch goals. Elements that made the cut include a music player, Achievements, a New Game + mode and an entire level which recognizes some of the campaigns donors. Others, which will be added as free updates throughout the year, include a four-player Battle Mode, a Challenge Mode and additional player characters modeled after the game's bosses.

Also incoming is a Gender Swap mode, which will affect the game's male main protagonist and area bosses, as well as the female Shield Knight and main antagonist, The Enchantress.

And do not get it twisted: You're going to die in Shovel Knight, and often. Its earlier levels throw a few curveballs at you while introducing the game's mechanics, while the last few levels are just curveballs top-to-bottom. Spikes and bottomless pits are one-hit kills, and there are a lot of enemies (and bosses!) in those stages that are very, very good at pushing you into them. It's not quite as unfair as, for example, a Castlevania Clock Tower, but at points it does come awfully close.

The game's sole weak link is its economy, which somewhat undermines the cleverness of its death mechanics. There's a bunch of upgrades, equipment and items to purchase from the vendors in Shovel Knight's world, but you'll earn enough cash to buy all of them well before the game's ending. I cleaned out every store shelf when I was about three-quarters of the way through the game, making the remainder just a little less compelling.

It's not just the mechanics of old-school games that Shovel Knight nails, though; it also has that undefinable, metaphysical look and feel of an NES classic. The game's setting is memorable and quirky, with inexplicable animal-human hybrid inhabitants like the Goatician, a goat-man Magician who sells health upgrades, or the Troupple King, a gigantic, apple-shaped fish who, after a ceremonial dance, spits out various flavors of helpful potions. It's a bizarre, lovable world that can stand toe-to-toe with any Hyrule or Mushroom Kingdom.

There is a reason we can all remember so much from games that are almost 30 years old, and Shovel Knight has tapped into that reason in a profound way. We don't love the brands of our youth; we love the characters, the settings, the way actually playing those games made us feel. Shovel Knight doesn't settle for acknowledging those aspects; it includes them around every single corner. Shovel Knight is so much more than a love letter to the genre — it is, in fact, the kind of game people write love letters about.