Share All sharing options for: Why the only stretch goal in Sunset is the chance to see its heroine

The Kickstarter campaign for Sunset, Tale of Tales' first-person exploration game set in a fictional tropical republic in 1972, will only have one stretch goal. It's double the campaign's original goal of $25,000, and it grants a seemingly simple addition: more Angela Burnes.

Angela Burnes, an African American immigrant and housekeeper, is Sunset's heroine. Since players control Angela from a first-person perspective, she'll remain largely unseen. But if the campaign's stretch goal of $50,000 is achieved, players will catch glimpses of Angela — a shadow, a reflection — to make them "fully aware of who she is."

That goal includes additional hires for animation and concept art, as well as narrative additions in the form of diary entries. More importantly, however, developers Auriea Harvey and Michaël Samyn are keen to give players an expanded view of Angela.

"We don't want you to forget whose life this is," Harvey said. "You are piloting the body and making decisions as an African American woman in a South America that is foreign to you, but you too are immersed in it ... She is who you think she is, so we hope to reframe your preconception of who she is by the concrete reminder that you are looking through her eyes and experiencing her life." 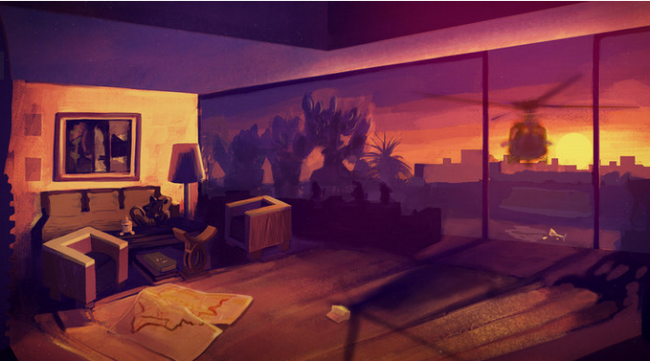 Harvey describes Angela as a character inspired by women such as political activist Angela Davis and singer-songwriter Nina Simone. Angela has experienced the slow change brought on from the civil rights movements of the '60s, and the realities of racism in the '70s. She's a radical thinker searching for something, not "Foxy Brown or a disco queen."

Much of the character, Samyn adds, is based on texts by feminists, revolution documentaries and films by black directors.

"I feel it is important to do what I can to support platforms where other voices can be heard," Samyn said. "Frankly I don't even do this out of a sense of fairness or political engagement but simply because I'm curious. I want to hear what women say. I want to hear about what life feels like if you're a person of color. It moves me and enriches my experience of the world."

"It's a heart-wrenching, unintuitive decision to make."

Angela's experience, and by extension the player's, will deal with questions of power, love and violence. As players roam the apartment, they'll be given subtle ways to influence the ongoing conflict. Samyn says that both he and Harvey lean toward pacifism, along with the game's main characters, but peaceful resolution may not always be the best choice.

"Sometimes the oppression seems so extreme and the future so hopeless that violence may become the only morally correct response," Samyn said. "It's a heart-wrenching, unintuitive decision to make."

The developer added that despite its very serious subject matter, Sunset is meant to be an entertaining experience. Past Tale of Tales games have been experimental in a way that can make them difficult to enjoy, he said, but Sunset is different.

"We want to apply all that experience to a design that is far more accessible," Samyn said. "We're thinking of it as a thriller, a political thriller with romantic aspects, about snooping around in somebody's private home."