This is EA's second mixed martial arts title, after the appropriately titled EA Sports MMA, which debuted as now-defunct publisher THQ released yearly installments of its own UFC series. With the death of THQ, UFC and EA made a new deal. EA Sports UFC is the result.

Players who enjoyed EA's Fight Night series may find much familiar about UFC's physics-based combat and teeth-rattling emphasis on realistically rendered damage to the human body. But where Fight Night and even THQ's UFC titles found varied success, with controls that were accessible to normal human beings, this new UFC's intense physicality is often overshadowed by a complicated, impenetrably opaque input scheme.

UFC's physicality is overshadowed by an opaque control scheme

On its surface, EA Sports UFC seeks to be the total UFC package. It has a roster of dozens of real-world UFC competitors in a number of weight classes ready to beat the crap out of each other online or locally, each with their own collection of specialties and techniques. But UFC also offers a career mode taken straight from EA's boxing series Fight Night, albeit with a UFC-oriented twist.

After creating a custom character — which, disappointingly, is limited to male fighters despite the inclusion of the UFC's women fighters elsewhere in the game — you'll take them through The Ultimate Fighter reality show as you seek to make it to the big show and, ultimately, a title in your weight class.

EA Sports UFC takes the brutal, in-your-face violence and detail of the Fight Night games and ratchets up both. There's an intense sense of physicality on display — punches and kicks crash against bodies that often seem all too human, despite a strangely inconsistent whole. Fighters in UFC have slack zombie faces and dead eyes, but their bodies take cringe-inducingly realistic damage. More than once, my immediate reaction to a knockout was "that person is dead now."


Note: I'm usually all about body shots in UFC, but the game goes out of its way to explain how dangerous Hendricks is with one-hit knockouts. So my strategy was to open him up to the same thing, and keep my distance from his left hand. And then I killed him, it looks like.

This is the best thing EA Sports UFC has going for it. Instead of static life bars, fighters have stamina that depletes with every action and regenerates based on their activity. Damage is done to specific areas of the body, and you can see how well you're whaling on someone via a diagram of their body in either corner of the screen. As an area gets weak, it turns red, signaling its increased vulnerability.

Or, you know, you could just keep kicking them in the ribs where the giant, swelling mass of bruises is forming. Or hit them in the face until blood is (literally) splashing out. UFC is not for the faint of heart, which I also suppose is the ultimate true-to-its-source compliment — though, thankfully, I have yet to see any compound fractures in EA's digital Octagon.

The problem, though, is getting to that point. While there's a significant and tangible sense of payoff and progress in EA Sports UFC's career mode, as well as every individual fight that I've had in the game, it's an uphill climb through the most maddeningly complicated control scheme I've ever encountered in a game.

"More than once, my immediate reaction to a knockout was 'that person is dead now.'"

The controls aren't just complex; they're overwhelming. On my feet, it was often as much as I could do keep up with my expanding repertoire. Every button on the controller is used, but more, they're often used in tandem with other buttons. If I wanted to do a roundhouse kick to the midsection — my bread and butter for my UFC career — I had to hold the left trigger and back on the left stick, and hit the A button.

This isn't even a complicated move, by EA Sports UFC standards. That's left to more over-the-top and, in my experience, less useful moves, the capoeira kicks, the flying roundhouses. For flashier moves, UFC demands commensurate finger gymnastics, requiring you to hold at least one trigger, a bumper, be pushing the stick in a direction — or no direction at all! — and then hitting the appropriate face button.

I mostly stuck to the simpler moves. It was the only the way to keep my sanity amid what UFC was offering me, though the game did little to explain why any of it might be necessary or useful — more on that later.

That sanity was casually flung aside whenever I was drawn into a clinch (where the two fighters grapple with one another standing), or, in a recurring nightmare of profanity and frustration, taken to the mat for EA Sports UFC's infuriating ground-game mechanics.

Getting to the ground requires a string of right stick shoves, half-circles and, I'm convinced, dark ritual magic if you want to consistently find success. Computer opponents have much less trouble getting you on your back, and once there, regaining your footing requires ... well, I'm not actually sure. I think that clicking the left stick and holding it in a direction is what makes it happen, but UFC is content to merely gesture in the vicinity of instruction here.

I'll reiterate this, because it's easily the biggest failing of EA Sports UFC's inaugural outing. It has the single most complicated control scheme of any game I've ever played, and addresses one of the most sophisticated one-on-one competitive sports in existence. But EA Sports UFC does an absolutely abysmal job of: one) teaching you how any of its moves work or what the logic behind its control scheme is beyond low, mid and high attacks, and two) explaining why you should be doing any of the things you can do.

EA Sports UFC allows you to use every limb, elbows and knees, even your shoulders to do harm; to target either leg, the midsection, the head. And it doesn't seem to give a shit if you get any of it, or learn anything about its systems. My solution playing through career mode was to get taken down to the mat as infrequently as possible, and to furiously push in the left stick when I was down, praying to get back to my feet. 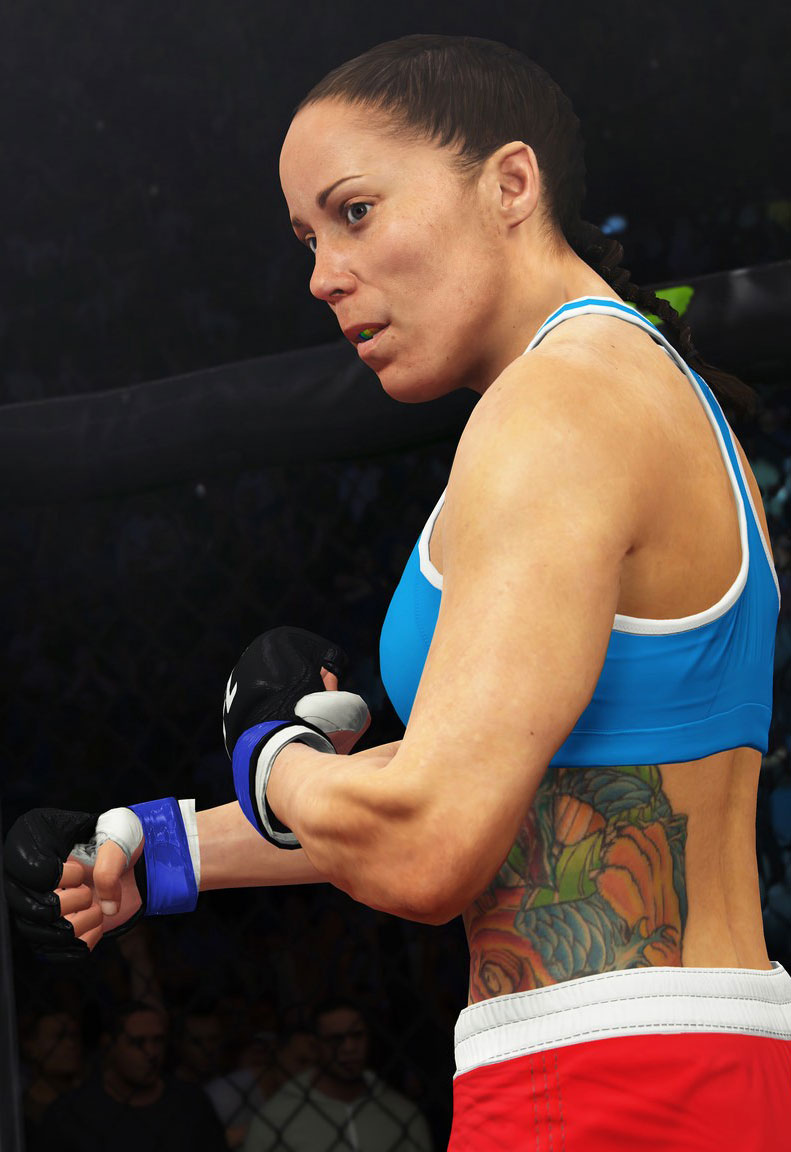 There's lip service paid to understanding these mechanics via mandatory training in the career mode and a series of challenges. But these are with little exception opponents that do not fight back, where there's no resistance whatsoever to the harm you intend to do them. In practice, in actual matches, the bumper holding and right stick quarter circles worked rarely, and I could never tell if I was doing them wrong, or if my character just wasn't powerful enough to make transitions in a clinch happen.

All of this is so infuriating because somewhere, beneath the labyrinthine bowels of UFC's ground game and clinch mechanics, there's an almost uncomfortably visceral fighting game on display.

When I landed punches and kicks in EA Sports UFC, I felt it the way I do when watching boxing or MMA. The physics and collision-driven movement and attacks feel natural and intuitive, when they work. And the crazy, jump-off-your-couch unpredictability is threaded throughout the game, especially in multiplayer. One match with a friend ended with the second punch, a body blow that must have hit a kidney, sending their fighter to their knees, clutching their midsection as the ref called the fight. We couldn't stop talking about it; it provided as good a water cooler moment as any pay-per-view.

But there are other water-cooler moments EA Sports UFC might wish were less prominent. EA Sports UFC is awash in technical problems: The sluggish UI seems to introduce minor freezes and stutters during gameplay in addition to providing a laughably poor user experience. Then there are the often-hilarious physics and collision bugs that result in Cronenbergian body distortion.

Worse, the game often crashes entirely, and this issue is occasionally repeatable at the worst possible times. In my career mode playthrough, EA Sports UFC froze and crashed every time I won my third title defense, no matter how many rounds I dragged the fight on or how I ended my opponent's challenge. The only way to force the game forward was to lose the fight. Coincidentally, I also lost any interest in continuing my UFC career after that.

EA Sports UFC feels barely held together, a collection of parts that are often as frustrating as they are poorly explained. Somewhere, in all of the complication and opacity, is a game unlike anything else out there, that finds the unpredictability and wildness that set MMA apart from other combat sports. But there's an awful lot of bad to dig through to find it.