It's not a completely unfair comparison for the team-based game — which, yes, has online battles in an arena-like setting — but he's quick to point out these are simply elements of the genre, nothing more. By Jones' account, the game is more like two Orcs Must Die! titles smashed together.

Unchained has offense-heavy nature of MOBAs, the aggressive push for territory while slaughtering your opponents again and again with glee, down pretty well. It sets itself apart from the tricky, loaded-with-expectations genre, however, with a focus on defensive plays and traps — and its open arm acceptance of the oft-dreaded "toxic player."

While League of Legends developer Riot will ban even professional players for naughty behavior, and Heroes of Newerth creator S2 Games is trying to yank bad seeds out at the root with a brand new MOBA, Robot has a chill stance on the topic.

Haters, Jones says, are gonna hate. More importantly, if the toxic players are flocking to your game, you're onto something special.

"You need those people there."

"There's probably something good about the toxic players showing up and sticking with your game," Jones said. "The good thing is probably that it's a good game. It's holding their interest, it's keeping them around. It's making them passionate enough to give a damn."

Jones expects Unchained to draw in some aggressive players, but isn't interested in scaring them off. Gaming in general, he says, shouldn't try to eliminate that group. Players who want to avoid that aggression can choose to play defensively or act as a support character.

"I don't think those are bad people," he added. "You just gotta do your best to deal with them in whatever manner seems to work the best."

I tested this theory out during my hands-on time with the game. While the brute strength approach to pushing territory required me to be fearless — and convincing enough to make players rally to me — playing a guardian role changed the game's experience for me. I strategically laid out traps and built up my resources to summon stronger allies in each wave of attacks. If I wanted to get into the action, I could also man a character with long-range skills to support tank players from afar. Like Jones suggested, aggressive players were the least of my worries.

"You go on offense, it's a little bit scary," Jones said. "You're going through all the enemy traps. You're going through heroes that are defending. But if you're on defense, you're sort of behind your traps, you're near your rift and you're with your lane guardians. Those kind of things provide a little bit of security to a player who might want to learn a little slower or might not feel offensive." 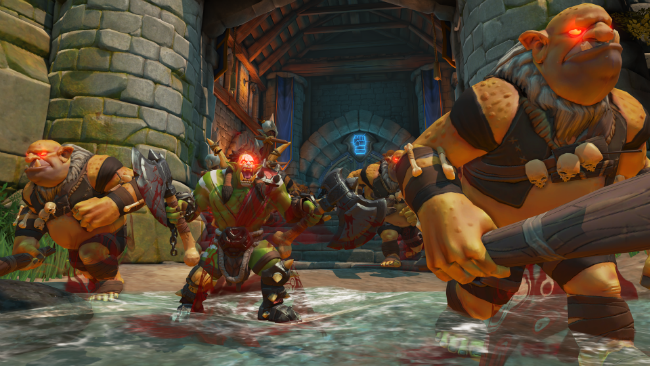 Players will also have the chance to play with AI opponents if real humans seem too intimidating. Robot Entertainment is still tinkering with bot intelligence to hit that sweet spot in terms of difficulty, and it's possible that their intelligence will even be adjustable. For now, however, it's a work in progress along with the rest of the game.

Robot is prepared to deal with passionate players, and Jones makes an effort to engage with them on the game's forums. Most of their unhappiness, he said, comes from a lack of understanding game development.

"They're not going to go away," Jones concluded of toxic players. "And honestly, I don't think you want them to.

Update: Robot Entertainment has released the following statement:
"Before we get started, let us be crystal clear — toxic players that worsen the experience for the Orcs Must Die! Unchained community absolutely will not be tolerated.

"Earlier today a headline suggested that Robot Entertainment welcomes toxic players in Orcs Must Die! Unchained. In the full interview, we acknowledged that toxic players are an unfortunate facet of multiplayer gaming. We made clear that we want to hear from all players no matter how passionate they may be. Passionate but not toxic. We have an active community management team in place that will address toxic players quickly and decisively.

"We are entering our closed beta today for Orcs Must Die! Unchained and we strive to hear from the community every day on how we can improve the OMD experience. Community feedback has always been an integral part of the Robot development process, and we want to ensure we hear from all players including our most passionate of players. But if a person chooses to restrict or impede upon the gameplay and community experience with inappropriate behavior, then we will ensure they are disciplined and, if needed, banned.

"We encourage fans and players to help us build an encouraging and uplifting community for Orcs Must Die! Unchained. Feel free to visit our forums and let us know what you want most from the game and the experience. We love to hear the feedback. We want players to know that Robot will always strive to deliver a positive gaming experience while playing OMDU."