Killzone Shadow Fall's Echo is back. Here's what the actor who plays her has to say

Share All sharing options for: Killzone Shadow Fall's Echo is back. Here's what the actor who plays her has to say

Echo is one of the central characters in Guerilla Games' Killzone: Shadow Fall. She also appears in multiplayer expansion Intercept, released this week for PlayStation 4.

The scion of Helghast's ruling class, she was fathered by a Vektan, placing her at the center of a vicious rivalry on the planet Vekta. She is a skilled spy and combat operative.

Echo was played by actor Jamie Gray Hyder, probably best known for her role as werewolf Daniella on HBO's True Blood. In a recent interview with PlayStation Blog, she talked about the challenge of playing Echo, and of acting in a motion capture studio.

"You've got a camera strapped to your head one inch from your face, and you're wired up to a mic, and you've got this suit on," she said. "It requires so much focus and it's really hard work physically, but I enjoyed both those aspects of it.

"All of the visuals given to us by the studio definitely helped us understand our characters. It does take a lot of imagination, and that's why it's so similar to stage acting for me. You don't have a costume or a set, so you have to develop a full character in your mind in order to take this giant empty studio space and really make a universe in there for them to live in."

Echo is undoubtedly a popular character in the game. Gray Hyder (below) said she worked hard to get a fix on her personality. "She knows what she's there to do; there's no confusion. In a world with so much chaos going on, she's totally focused. For me, that was such an important part of the character. She's on a mission and it didn't matter what was going on around her; she's a lone wolf." 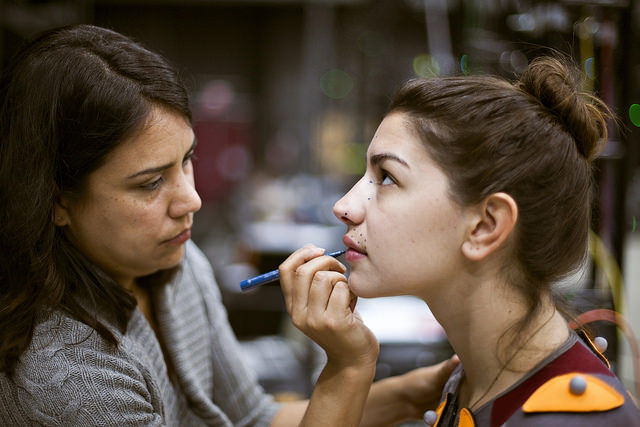 Guerrilla sought to bring Echo and other big characters into the expansion, even though it is not a single-player story campaign. "One thing that immediately came to mind when we started development [of the expansion] was that we needed to bring back some of the strong characters that we had in the single player campaign, such as Echo," said game director Steven ter Heide. "They appear as boss characters in Intercept. We've created an AI commander in the background that strategizes based on how your team is performing. It can throw different types of troops onto the battlefield and issue different orders so the game is continually changing. Then, when the tide really needs to turn, it can throw in one of these boss characters, which is where Echo comes in."

"I'm so glad Echo was so well received, especially when there aren't a whole lot of strong female characters in games these days," added Gray Hyder. "It's great to be able to set a precedent like that, and to have gamers respond so positively was awesome to see."