Why E.T. wasn't the worst game in history

Share All sharing options for: Why E.T. wasn't the worst game in history

Howard Scott Warshaw is a man with many achievements to his name: licensed psychotherapist, published author, award-winning documentarian, former real-estate broker and developer of the supposedly worst video game ever made: E.T. The Extra-Terrestrial for the Atari 2600.

Speaking to Polygon from Los Altos, CA, Warshaw can't help but laugh. "It tickles me," he says, referring to the phenomenon of E.T. being labelled the worst video game ever made, even by those who have never played it. "It became a bandwagon for people to jump on. I mean, it's cool. I did Yars' Revenge, and it's thought of as one of the best games of all time, so it kind of thrilled me to think I have both the best and worst game. It makes me think I have the greatest range of any game designer in history, and that's cool. That's something."

Warshaw laughs because he doesn't actually believe E.T. is the worst video game ever made. As far as he's concerned, he delivered what was asked of him. The game was by no means perfect and, if given more time, it could have been better. He's happy with what he made. And there's no shortage of game developers or Atari enthusiasts who are ready to defend both him and his controversial game. 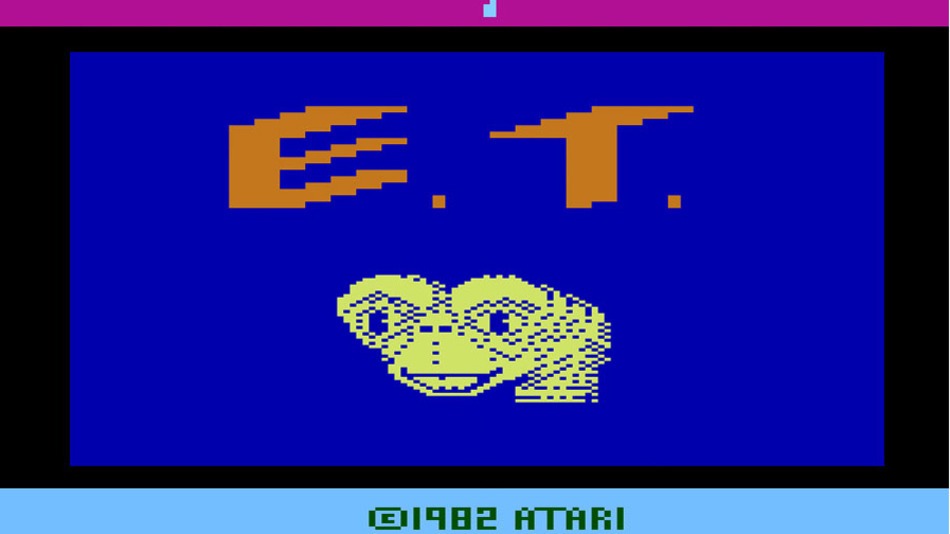 AN ASSIGNMENT FROM STEVEN SPIELBERG

On June 27, 1982, Warshaw received a phone call from then-Atari CEO, Ray Kassar. Warshaw had just finished developing the Raiders of the Lost Ark video game, a critically-acclaimed title for the Atari 2600 that was also a financial success for the company. Kassar told him director Steven Spielberg specifically requested that he make the E.T. video game to accompany the movie of the same name. The deadline? Sept. 1 — exactly five weeks from the day of the phone call.

Unbeknownst to Warshaw at the time, Kassar had called his superiors to ask if such a thing could be done. In the early 1980s, few people had completed video games in less than five or six months, let alone five weeks. They told Kassar it was impossible. He went directly to Warshaw. "And I said, sure," Warshaw tells Polygon. "I'll do it."

Two days later, Warshaw was on a plane to Los Angeles to meet with Spielberg. He didn't get a brief, he wasn't given any direction. All they wanted from him was an E.T. game and they wanted it by Sept. 1. He had a development system moved into his house, and for the next five weeks he worked on the game until it was time to submit his code. He delivered the game on time, and it went on sale that Christmas. Everyone had thought it impossible to make a game in such a short amount of time. He made it possible. He felt good about it. 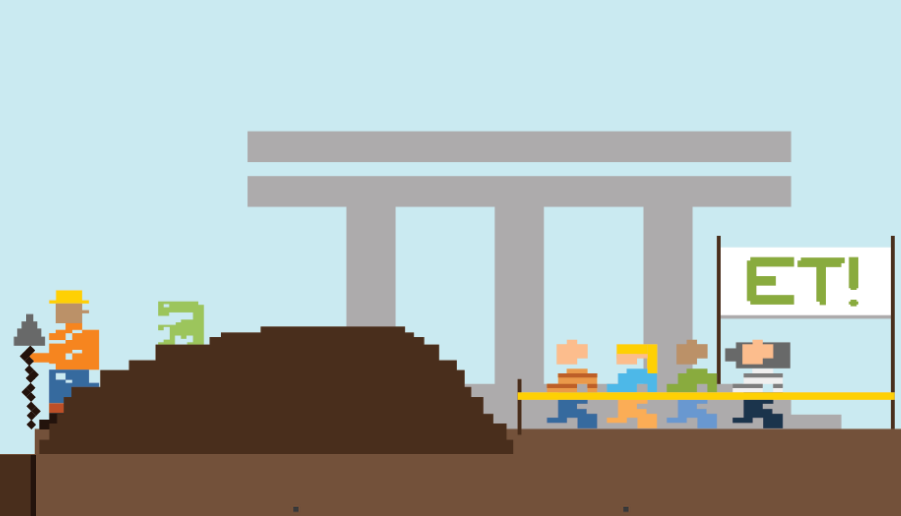 How to dig up a landfill

By early 1983, things didn't look good. The game was being returned to stores across America. Atari started hearing complaints about E.T. Some customers felt the game was unfairly difficult. Others thought it was outright broken — they kept falling into the game's virtual pits just as they'd climbed out of them. It was disorienting.

That same year, the video game market crashed. Millions of games went unsold on store shelves. The industry had burned itself. Years of producing poor-quality titles had left buyers jaded, and no one was spending money on video games. As the most high-profile title at the time, with Atari reportedly spending $20 million on the E.T. license — an amount almost unheard of at the time — E.T. was blamed for the industry's collapse.

Developers who worked at Atari would admit that E.T's disposition was not good, particularly in light of the crash. But Jerry Jessop, an engineering technician who worked at Atari from 1977-1985, doesn't believe E.T. played a big a role in the game industry's collapse as many people have come to think.

The industry had been building up to its own crash for at least two years before E.T. arrived on the scene. Everyone was making Atari games, and they were making them poorly, too. A lot of the stock on shelves was almost unplayable, and he says there were hundreds of titles that were far worse than E.T. Yet E.T. became the scapegoat for the crash.

"I think the game got caught up in the hype, and I blame Atari marketing and sales entirely for this," Jessop says. "First, they had an unrealistic expectation in that you could produce a really good game in five weeks. And, frankly, I don't think they cared if it was a great game or not — they just needed something in time [for] Christmas.

"Then they did a terrible job of forecasting. If I remember correctly, they made something in the order of just shy of 20 million E.T. cartridges. If memory serves me correct, there were only about 12 million consoles in the U.S. to put them in. So you already had almost double the amount of cartridges as consoles to put them in, so naturally you weren't going to sell them all because not everybody is going to buy 1.8 cartridges."

Even after returns, E.T. sold more than a million units, which was considerable at the time. But its high sales were dwarfed by the overproduction of cartridges and the high cost of the game's license.

"I think E.T. was horribly maligned and held accountable as the worst game ever, and I just don't believe that at all," he says. "It got the worst rap ever. People took this 12 million cartridges figure associated with E.T., then misassociated it with all 12 million being dumped in a New Mexico landfill, and that must have happened because it was the worst game ever. The facts, I think, are a little bit different."

Ernest Cline is the author of Ready Player One, a science-fiction novel partially inspired by the easter eggs in Warshaw's games. He says the fact that Warshaw made E.T. in five weeks makes it all the more impressive. Time frame aside, he believes the E.T. video game had innovations never before seen in home video games. First, the game presented players with a complete world. Where most games of the time restricted players to one screen, E.T. mapped the game onto a cube-shaped world, and as players walked from screen to screen, they traversed the cube-shaped planet. The game was also full of easter eggs. Collecting all the E.T phone pieces would spell out HSW — Howard Scott Warshaw's name. Regenerating the game's Dranium flower at the right point in the game would turn the flower into Yar from Yars' Revenge.

"It was an amazing, innovative, groundbreaking game that became overproduced."

"E.T. was the first emotional video game where you had to care about this alien that you were trying to rescue," Cline says. "It was one of the first games I had an emotional reaction to. I was excited and a little teary when the John Williams music played at the end. So to blame the crash on E.T. is nonsense. It's ridiculous. It was an amazing, innovative, groundbreaking game that became overproduced."

There are many developers who would argue that there are plenty of Atari 2600 games that were significantly worse than E.T. Mike Mika is the head of development at Other Ocean Interactive. He says when he played E.T as a child, he thought it was fine. It had its problems, but he enjoyed the game and, if he had to rate the game out of 10, with 10 being the best Atari 2600 game and 1 being the worst, he'd give it a 6.5

"There are a lot worse games for the Atari 2600, and I think for people who haven't grown up with that system or were part of that era probably don't realize how bad a lot of games were for the Atari," he says.

He cites a game called by Mythicon called Sorcerer, where he couldn't even figure out what he was supposed to do in the game. "There were like three things moving around the screen, and I was something moving around, and I tried to attack them but I couldn't figure out how. I remember reading the manual — I'd never liked to read manuals — and it gave me no insight on how to play the game any better."

There was also a game called Mangia, where the player's mother was trying to feed them plates of food, and the player had to toss the food to an owl in the window or a dog or a cat under the table. Eating too much food would cause their stomachs to explode. "There was also a game called Fast Food, where you were trying to not eat the purple pickles, but the Doritos and regular pickles came at you and you were trying to eat those," Mika says. "The goal of the game was to get fat, which makes no sense to me, but somehow that was sitting on a store shelf."

For more than three decades, Warshaw maintained that there were no video game cartridges buried in a New Mexico landfill. It didn't make sense to him. Why would Atari — a company that was already losing money — spend more money to transport games that it felt were completely worthless to the middle of a desert to bury them?

Earlier this year, a group of documentarians headed up a dig in New Mexico to find the cartridges. Warshaw was there. To his surprise, they unearthed thousands of video game cartridges — few of which were E.T. Atari had essentially dumped a warehouse full of games in the desert. There were some E.T. cartridges, but there were also lots of copies of Centipede, Defender, Yars' Revenge, Raiders of the Lost Ark — some of Atari's bestsellers.

"Several things went through my mind," he says. "The first was I'd never been so happy to be wrong about something in my life. The second was I have never in my life seen a large line of people waiting to get into a dump."

The landfill was surrounded by camera crews. A long line of developers, Atari fans and video game enthusiasts pushed against the landfill's fence hoping to catch a glimpse of the cartridges.

Mika and Cline were both there, excitedly watching pieces of their past emerge from the ground. And Warshaw, glad to be wrong and glad to be there admits he was a little overwhelmed.

"I really became very emotional in that moment," he says. "I mean, this was it. It's the reason we made games. The reason you do these things is to entertain people, to create magic in the moment, to create something special for people, and in that moment, when they found the games, and everyone was like wow, and they were so excited, and all this stuff was going on ... I realized this piece of work, this code I wrote in five weeks 32 years ago is still doing it. It's still generating excitement and attention and focus. I had this tremendous, overwhelming sense of satisfaction."

E.T. The Extra-terrestrial for the Atari 2600 will likely continue to be cited as the worst video game of all time. There are people who will probably still blame it for the crash of 1983. And looking at history, it may be considered one of the game industry's great failures.

Standing in the desert, watching cartridges being dug out of the ground, seeing the excitement on people's faces, Warshaw wouldn't consider any of it a failure, though. "It felt like a huge success," he says. "That I was still entertaining people with my work, with what I did. That feels good."