Looking back on NBA 2K: The best sports game of the last generation

Share All sharing options for: Looking back on NBA 2K: The best sports game of the last generation

Over the course of the last console generation, 2K Sports' NBA 2K franchise became the top simulation sports game on the market. That's one of the reasons why it's so delightful to see NBA 2K14 contort itself to bring to life the basketball cataclysm that is the NBA Y2K series from SB Nation's Jon Bois. In essence, it's the NBA 2K version of his celebrated Breaking Madden series. Jon did it out of love, to pay homage to the last few years of 2K's basketball franchise — that's what he'll tell you, anyway. 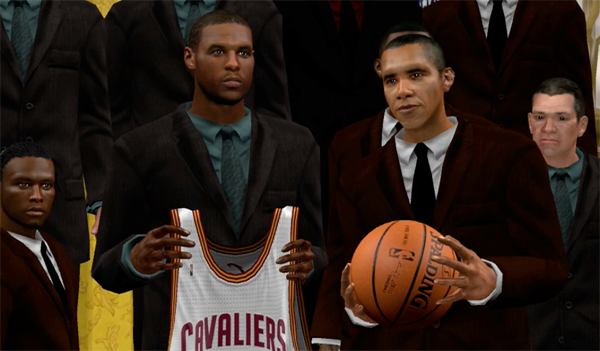 Today, you can check out the season finale of NBA Y2K on SB Nation. It may signal the death of the NBA as we know it.

Here at Polygon, sports fans Owen Good and Samit Sarkar decided to use the occasion to look back on the NBA 2K series in their own way. What follows is a series of letters in which they recall the venerable franchise's recent glory, and gaze hopefully into its future.

Owen: It says a lot that the NBA 2K series is so comprehensively good it can realistically simulate something as stupefyingly bad as Jon Bois' unwatchable league set 20 years into the future. It sounds ass-backwards, but it really does work as a tribute, and I agree with Jon's thoughts that NBA 2K on the last console generation is the best multi-year run any sports video game has had.

That's some strong stuff, though, when you consider the world-class presence of FIFA, whose fans must again feel like an American who doesn't get soccer is digging for reasons it can't be the best. What you forget, though, is that FIFA didn't really get its footing until around 2008, where 2K's basketball game never broke stride coming from the old Xbox and PS2 generation, and really poured it on right as games for the PS3 and Xbox 360 hit their peak of quality.

Rob Jones, the senior producer for NBA 2K, and I discussed FIFA's rise about three years ago, when he flew to my home to show me NBA 2K12. In addition to loving and playing a lot of basketball, Rob plays and loves soccer. It was clear that Visual Concepts considers FIFA more of their competitor than anything else EA Sports was doing or not doing with basketball. Rob recalled how people in our line of work pumped FIFA 10 as overall game-of-the-year timber — which is now an utterly rare thing — when it was FIFA 11 that should have gotten such consideration. Well, NBA 2K11, which I nominated for overall game of the year at another publication, essentially stole the lone nomination with which NBA 2K12 could have done more.

It's always hard to judge the true "best" game in an iterative sports title where, if a series deserves best-ever acclaim, the latest one absolutely should be the most playable and enjoyable. However, NBA 2K12, thanks to the NBA's Greatest mode that took dozens of beloved teams from the past and swaddled them in period-perfect broadcast presentation, stands apart as the pinnacle of greatness outdoing itself annually. FIFA, as good as it is, never did something as profound as 2K12's love note to the league's glory. 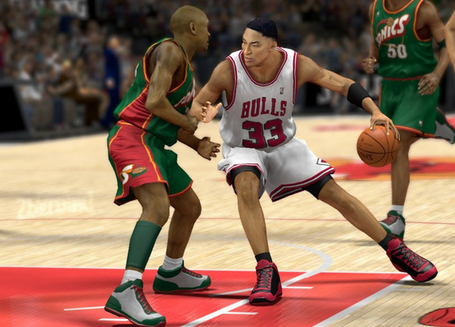 My question is, did all the problems NBA 2K14 had on the PS4 and Xbox One break this streak?

Samit: Before I get to your NBA 2K14 question, I'd like to note something about the series at large.

In some sense, NBA 2K's success is even more impressive when you consider that developer Visual Concepts managed to pull off that phenomenal run almost in spite of itself. The studio overhauled the game's fundamental control scheme for, what, three years in a row? How do you build a franchise that sells 4-5 million copies annually when you're making your audience re-learn how to play the game every year?

Well, first, we can't discount the significance of running unopposed. NBA 2K has been great for a long time, but if we're specifically focusing on NBA 2K11 (2010) through NBA 2K14 (2013), look at the competition in the marketplace during that span: There was effectively none. EA's failed reboot of its NBA Live franchise left the company with nothing, nothing, nothing and then NBA Live 14 last year, which competed with NBA 2K14 the same way the Oklahoma City Thunder competed with Clarence BEEFTANK.

Secondly, and more importantly, NBA 2K is just that good. Terrific gameplay aside, nobody is engaging with a sport's history in the way Visual Concepts did with NBA 2K11 and NBA 2K12, as you pointed out; hell, the studio even gazed into the future with the LeBron James mode in NBA 2K14. And there isn't a sports game out there with better presentation, commentary in particular.

Unfortunately, Visual Concepts may have focused too much on that part of the game in bringing NBA 2K14 to PS4 and Xbox One. Sure, it was the best-looking launch title on either console, and I got engrossed in the revamped, unskippable-cutscene-filled career mode. But the game was essentially an always-online title, and that killed the experience when 2K's servers were down (which, for a time, was often). And the pervasiveness of 2K's Virtual Currency yanked much of the fun out of the main modes' progression. That's to say nothing of the fact that a lot of the stuff in the PlayStation 3/Xbox 360/PC versions of NBA 2K14 didn't make the transition — and I'm talking about really basic elements of the game, like the roster editing that makes Jon's NBA Y2K series possible.

I wouldn't say that new-generation NBA 2K14 broke the streak, per se. I'm still having a ton of fun with it. But I think it did squander much of the good will that NBA 2K built up over the past four-plus years, and we'll have to look to NBA 2K15 this fall to see if Visual Concepts can get back on the horse.

Where do you think they'll go from here? Do you want to see the studio go back to the NBA's history, or are you looking for something else? 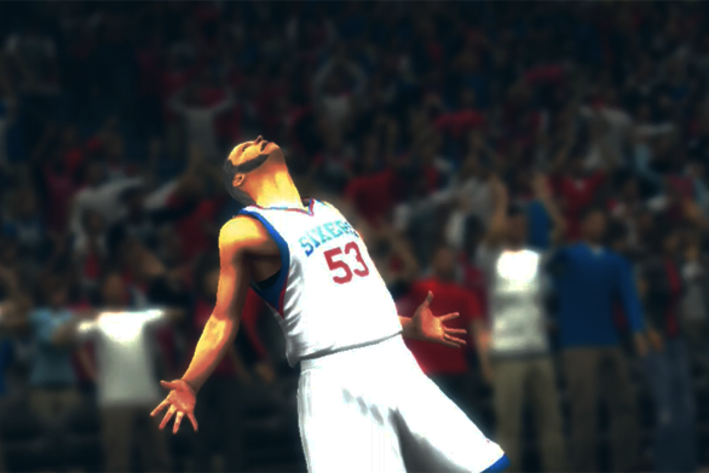 The Sixers' quest for an 0-82 season 2014 Kobe meets 1998 Kobe, is annoyed OutKast join the Hawks, go for 404 points in a single game Clarence BEEFTANK, the Memphis Grizzlies' secret weapon

Owen: NBA 2K14's biggest disappointments are plainly tied to the decision to make Virtual Currency a feature across all modes of play. 2K Sports has never said why the PS4 and Xbox One games had to have two save files — one online, and a different one offline — but it's a good bet this virtual economy figures into it somehow. So when Take-Two Interactive, the parent company of 2K Sports, boasts to investors about the growth in online revenue, it's fair to assume corporate leadership imposed these requirements, not developers. It's also reasonable to assume it's not going away next year when Take-Two nearly doubles its revenue over the past fiscal year and cites online transactions from NBA 2K14 as a key contributor to that.

So, like it or not, VC is here to stay, Sports fans' best hope is that this can all fund something that does appeal to them, like another historical mode or, frankly, the return of NBA's Greatest or The Jordan Challenge to this game under the current engine. 2K Sports has continued to offer the historical teams from NBA 2K11 and NBA 2K12, so we know it has the licensing. My only guess as to why 2K hasn't put them on current editions of the game, or offered them as downloadable content, is because holding back makes past editions of a sports video game worth buying, a total rarity in the modern marketplace. "Yes, once upon a time, we had back-catalog sales," Peter Moore, then the president of EA Sports, told me ruefully a few years ago. That said, online support for NBA 2K11 and NBA 2K12 has long since expired.

Still, you can buy an old copy of NBA 2K and play nothing but its offline modes and still have a hell of a good time with it. I still have copies of NBA 2K11, 2K12 and 2K13 on my shelf where my only editions of Madden, FIFA and MLB The Show are the current year's. Once the installation base moves solidly to the PS4 and Xbox One, then we'll likely see the return of these nostalgic modes, likely as downloadable extensions (or pre-order incentives). Until then, I'd look more for NBA 2K to explore the role-playing and story-telling that MyPlayer uniquely offers over other sports titles.

Samit: You're right; Virtual Currency isn't going anywhere. I'll begrudgingly tip my cap to 2K — they figured out how to take EA's lucrative Ultimate Team model and expand the microtransactions throughout the entire game. This puts NBA 2K in a precarious position as 2K Sports fully transitions the series to the new consoles this year: I think die-hard fans of the franchise have some reason to worry about its future. At the very least, if online connectivity is to basically be a requirement going forward, the servers need to be much more reliable than they were for NBA 2K14 on PS4/Xbox One.

Having said that, you can't throw NBA 2K's stellar recent history completely out the window. As bad a taste as the pervasive VC in new-gen NBA 2K14 left in my mouth, I've put more time into that version of the game than any other entry in the franchise. Microtransactions aside, I fully expect Visual Concepts to continue pushing the pace on the virtual hardwood, whether it's by revisiting the terrific historical modes of NBA 2K11 and NBA 2K12; deepening the storylines and interactions in the engrossing MyCareer mode; or (hopefully) bringing something we haven't yet seen to the series.

And if the worst-case scenario comes to pass, remember that the Star Wars prequels didn't retroactively make the original trilogy bad. Even if NBA 2K drops off a cliff from here — "highly unlikely" would be overstating the probability of that outcome — we'll always have the golden years of the franchise on the PS3 and Xbox 360 to remember.