Civilization Revolution 2 is designed as a bite-size Civ experience

Share All sharing options for: Civilization Revolution 2 is designed as a bite-size Civ experience

Following in the footsteps of Sid Meier's Civilization Revolution – which launched in 2008 for Nintendo DS, PlayStation 3 and Xbox 360 and for iOS the following year — Civilization Revolution 2 tasks players with colonizing and civilizing their own nation, conquering other nations as they advance from primitive times through the industrial era and beyond. Like its predecessor, the game involves historical figures in players' plights, including Abraham Lincoln, Gandhi and Napoleon. This time around, however, there are some new faces for players to conquer or befriend, like John F. Kennedy and Winston Churchill.

Developer 2K China — original Civ developer Firaxis games is providing "constant support and input" for the title — is also promising to release additional map sections and civilization leaders through the App Store. Players will have the option to purchase these characters and areas and add them to their game, although doing so is purely cosmetic. 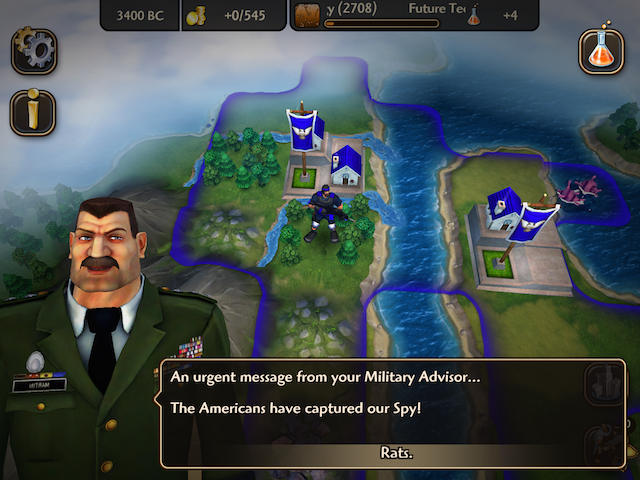 But Revolution 2 has been made specifically for iOS, and is designed as a quick, portable fix for series veterans, as well as an easy entry point for newcomers. An entire game, from first colonization all the way up to cultural victory, can be played in just around an hour.

Perhaps the biggest feature making Revolution 2 an easy first title for Civ newbies is its simplified user interface. With a finger tap, players can pull up their cities, moving settlers and resources. Within city submenus, players can select what to build and spend money on from a line of tiles on the right side of the scene. Swiping will scroll down the list, where players can select from different types of solders and war machines like catapults, buildings like grain silos and libraries. Players can also build Natural Wonders — structures like the Library of Alexandria and the Taj Mahal — which give players cultural points towards winning the game.

Not only are menus streamlined to show players all the details they need upfront to make informed decisions, but notifications that pop up during turns do this as well. In my hands-on time with the game, during one of my skirmishes fighting against a minor barbarian village, I succeeded only to have a group of settlers pop up. These settlers I could then move anywhere with fertile lands and have them build a new city. Small icons around the settlers and on the side of the screen quickly indicated to me, through tiny pictures, that I could either move these settlers along or have them stay where they were and build a new city. I chose the latter, setting up a brand new region for my people to produce military works. 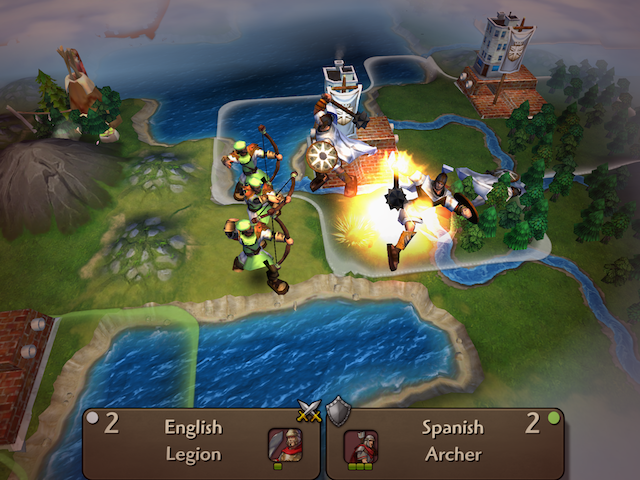 The rest of the game will be familiar to Civ players — the cycle of creating, conquering and controlling the world continues. To better let players observe what happens, Revolution 2's world is displayed in 3D and at a slight angle, rather than straight top-down. This lets players watch horsemen take down archers on foot, or trace the path of individual units across various parts of the map. The presentation is very bright, with loads of color and sound to accompany players' actions.

While the original Civilization Revolution hit consoles first, Revolution 2 associate producer Adam Plotkin said that there are no plans to launch the title on consoles or PC at this time. According the Plotkin, the reasoning behind the mobile-only launch lies with wanting to bring a tailored Civ experience to the mobile space.

Sid Meier's Civilization Revolution 2 will launch on July 2 for $14.99 and is compatible with iPad, iPhone and iPod Touch. The title will be released later for Android devices.