Back in 1989, there was an Amiga game where you drove a car around elevated platforms. Stunt Car Racer was in first person and, by today's standards, it looks incredibly crude.

But it was a great example of the simple, repetitive game mechanic in which you tried, again and again, to best your own time, using whatever tricks, shortcuts and maneuvers you could find. Back then, I played Stunt Car Racer often, with friends, seeking any way to shave a precious second off my time, while avoiding the ignominy of a crash.

Action Henk from Netherlands-based indie outfit RageSquid puts me in mind of Stunt Car Racer's classic ability to pull the player back to try one more time. As well as that more-ish quality, it's also a racing game, set on platforms; these ones reminiscent of Hot Wheels plastic tracks.

The game, set to appear on Early Access (Windows PC, Mac and Linux) on July 8 for $9.99, is in third-person, with toys doing all the running along ingeniously arranged courses. It's lightning fast, a color riot, packed with funny obstacles and boosters. In that respect it also borrows from another game made during that long ago era: Sonic the Hedgehog.

"It's very minimal, basic gameplay, but every millisecond counts," explained RageSquid's Kitty Calis. "There's a lot going on. If you want to get better and learn all the tricks, it's not easy."

Action Henk manages that trick of looking good, while keeping things simple. "We try to create a rich and high quality 3D environment for players to run around in," said game coder Roel Ezendam. "We also want the gameplay to be super solid. This is why Action Henk is about a small but polished feature set. We prefer a small number of great mechanics over having many that are mediocre. Because of this small feature set with a lot of depth, we also allow the players to really perfect their skills and become experts at the game."

The toy room setting seeks to bring in players of all ages. At first glance, it looks like a children's game, but there is a Toy Story-like level of sophistication going on too. The main character is a middle-aged GI Joe type who wants to compensate for his fading virility. The tracks offer multiple levels of complexity.

"We really like to make colorful games. However, our art lead also likes to have a realistic art style, as opposed to a cartoony style," added Calis. "This combination of real yet colorful quickly led us to the field of toys. We also want to make people feel childhood nostalgia. It's just great if they play the game and go like 'Oh I used to have that toy too!' Action Henk is filled with little nods to that." 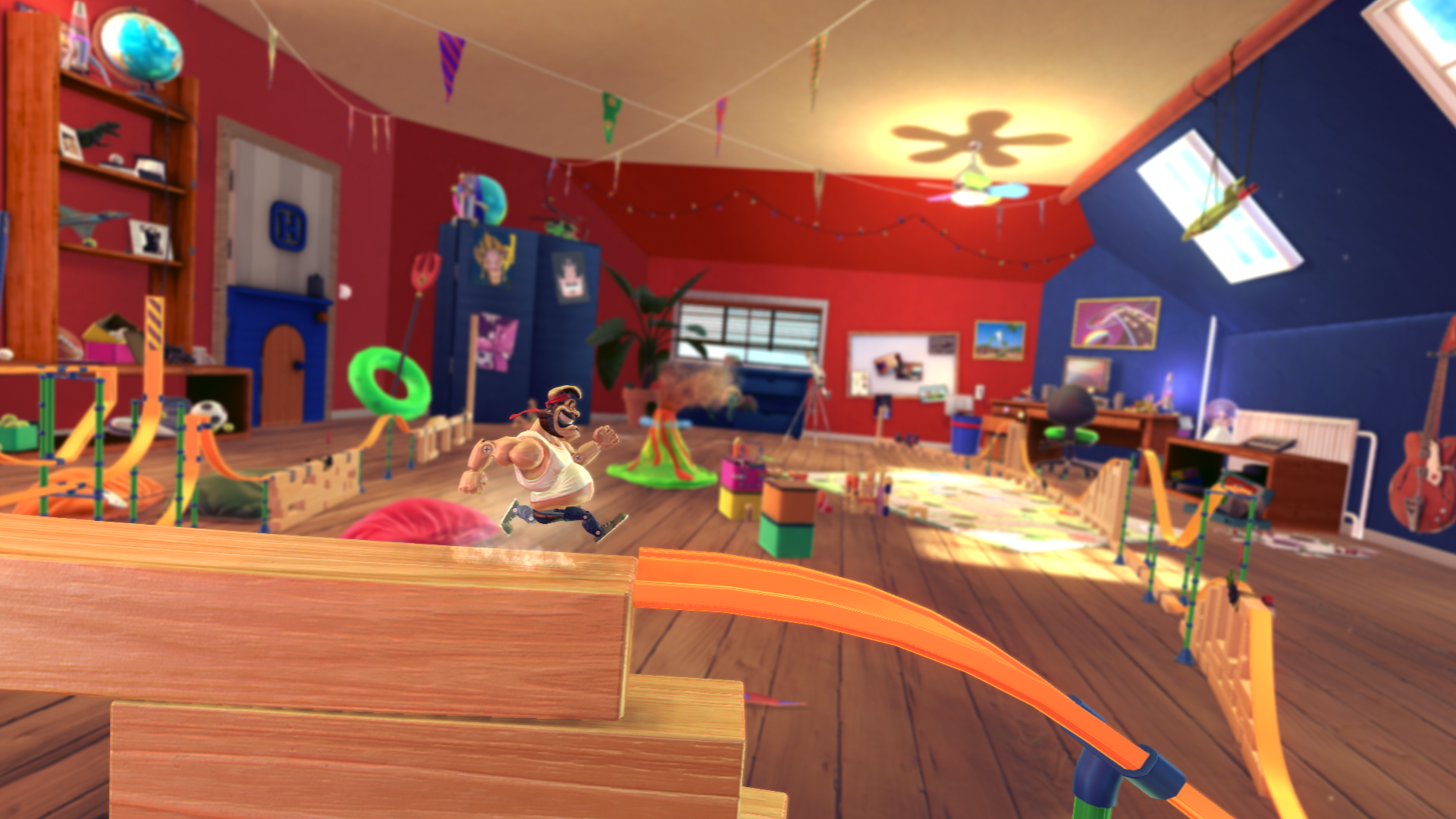 The game was originally a kind of game-jam project. "In late 2012 we approached an event called Game in the City to see if we could showcase a game," said Calis. "After being asked what our game was about, we answered that we didn't actually have a concept or prototype. Instead, we promised that we'd come up with something in the two months before the event. Somehow they agreed, and that's how we set out to create what eventually became the very first version of Action Henk.

"We got a great response to the game, and a local magazine wrote about it as their highlight of the afternoon. Sadly, we didn't have any financial stability to continue working on the prototype. It took us about a year of freelance work before we could really get back to development."

Thus far the game has won plaudits from the likes of Kotaku, Rock Paper Shotgun and Kill Screen, all of which noted its color, speed and nostalgia. There's also some clever and detailed game design going on here, as players zoom through loops and over ridges, grabbing onto swing-ropes and leaping chasms. 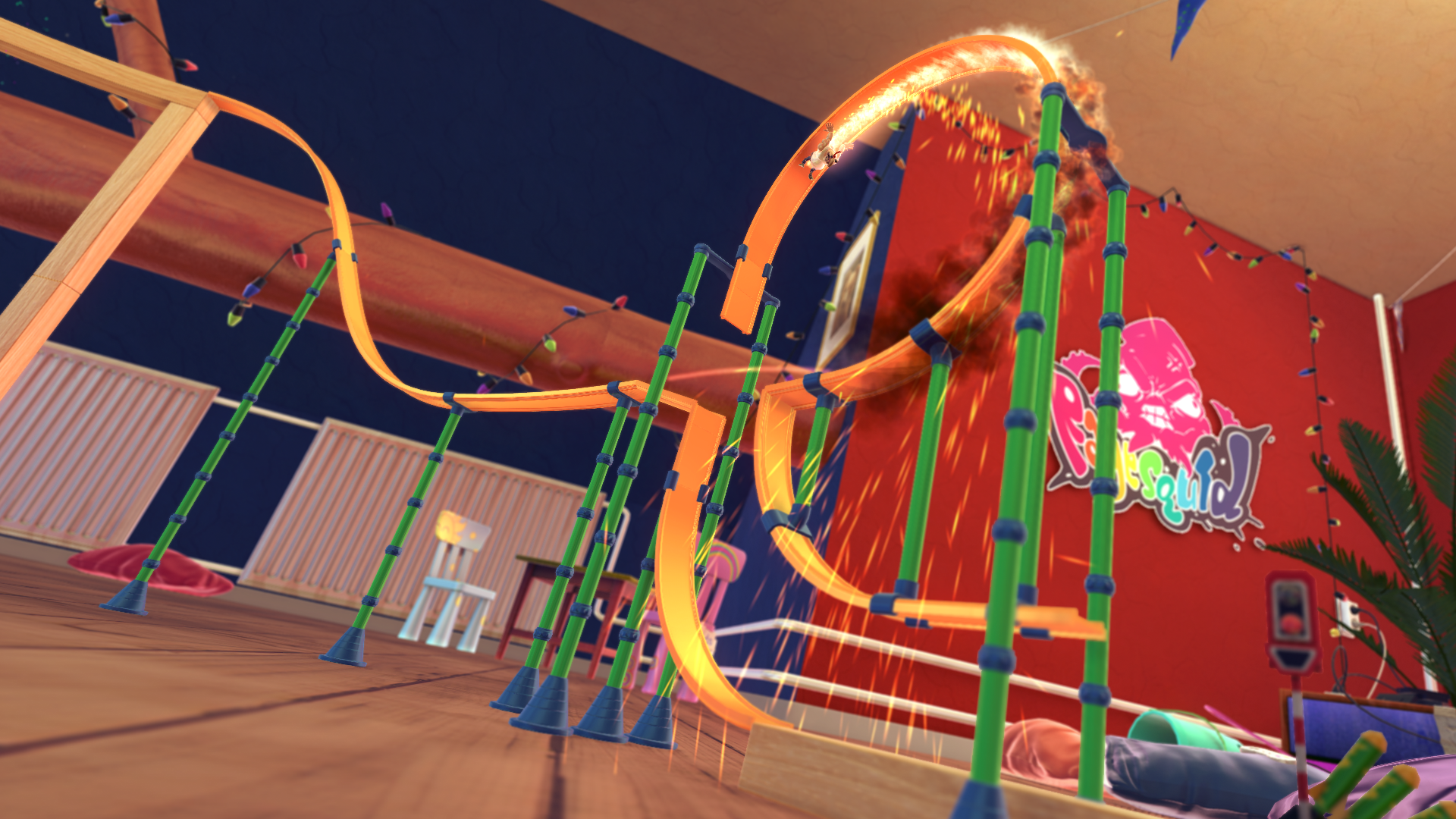 "We use level design tools to roughly calculate the different paths players of different skill levels will take," explained Ezendam. "By spacing each jump to have a landing area that feels good for both the slow and fast people, we ensure that the player will always maintain a nice flow. Because the game is all about mastery and perfection, the levels are usually very short, roughly 20 to 40 seconds. This enables the player to quickly iterate and master the levels.

"The game mechanics are built in a way that makes them seem simple at first, however after some time the player will find out about more subtle mechanics that can be used to optimize their momentum. If a player returns to an old level with these new skills, several seconds can easily be shaved off of their high scores."

Although it's a game likely to be embraced by children and players looking for a fun diversion, it also offers challenges to the more dedicated player. "There's one incredibly challenging level called The Ultimate Test just for demoing purposes, and there's only 13 people in the entire world who've managed to beat it," said Calis. "The best time is 34.5 seconds and the worst time is just over 27 minutes. People who can get gold medals on all other levels still have trouble with the Ultimate Test's first jump, and it's just great to see that the intended variety of difficulty through simple mechanics totally works."