Munin may be rough around the edges, but it has an inspired core.

Munin is as harsh and beautiful as the mythical Nordic landscapes that serve as its setting.

This abstract world is full of references to Norse gods and monsters. From underworlds filled with pale green ghouls and dark corners to volcanic caves, breathtaking fjords and Valhalla-like mountain landscapes — everything about Munin's look screams rustic, unforgiving beauty.

That theme translates into the deceptively simple puzzle-platformer's gameplay. Munin is hard in the best way. It's difficult to parse at first, but it rewards experimentation and out-of-the-box thinking. It's cleverly designed so that the solutions always feel as if they are in your grasp, even when they are dozens of steps away.

Munin opens with a cryptic passage about Odin's raven (the eponymous protagonist) being turned into a human by Loki. In order to return to her natural form, Munin needs to explore several worlds, collecting lost feathers. Each world is made up of devious, single-screen stages, but Munin can hop between worlds at will — no need to finish every stage in a single straight line.

Munin can run and jump short distances, but her real power comes from the ability to rotate sections of the screen. To collect every feather and move on to the next level, I had to manipulate stages into mazes that Munin could make her way through.

There's a catch: In order to rotate a piece of scenery, I couldn't be standing on or next to the part of the screen I was manipulating. Munin forced me to think two, three or even four steps ahead with every move, lending the game a more deliberate pace. That contemplative feel clicked for me. I played Munin slowly, and I relished every "right" move and eventual solution.

With every victory, I let out a whoop of joy.

Finding those right moves took time and experimentation. Upon entering a stage, I flipped every platform multiple times, just to see what was possible and which paths would become available to me. As I inched toward victory, I became more careful with my steps, flipping a platform only when I knew it was safe to do so. With every failure, I got closer to the solution. With every victory, I let out a whoop of joy.

Part of this satisfaction came from mastering a difficult puzzle, but part of it was relief that I didn't arbitrarily eat it on the last feather. There are plenty of ways to die in Munin; bottomless pits, spikes, fire and thorns are sprinkled liberally throughout every stage, and the hero dies immediately upon hitting a hazard. The penalty is stiff enough to be frustrating — I lost all my progress in the stage and had to restart. This wasn't so bad earlier in the game, when the puzzles were relatively simple, but later, when the level of complexity reached its peak, having to restart was a major nuisance. 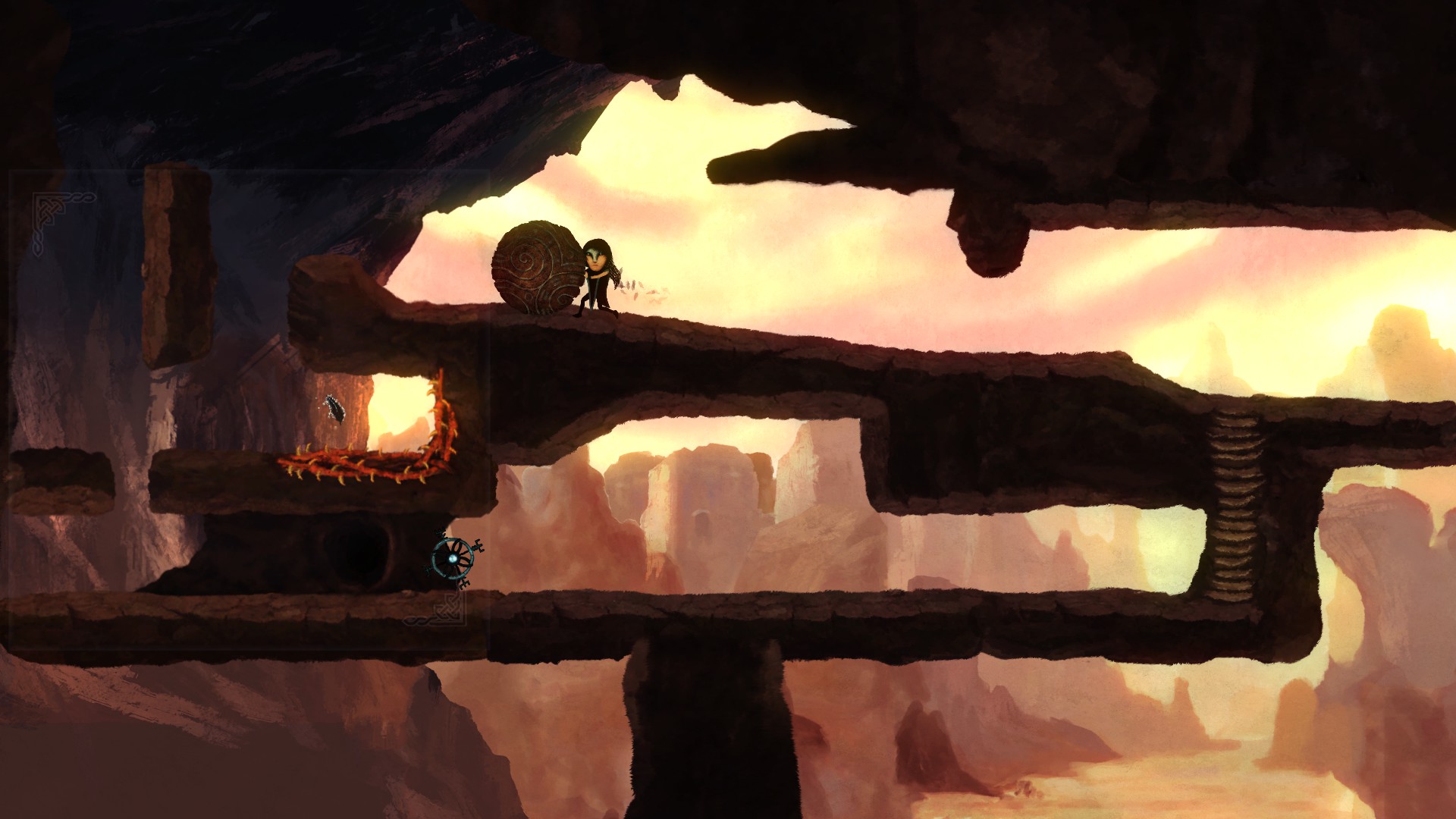 Vikings and Norse legend have been a relatively popular spring of inspiration for games lately, with titles like Castlestorm, Volgarr the Viking and The Banner Saga taking cues from the trend. But these games all have a cartoonish look and feel. Munin's theme and aesthetic are sparser and closer to a literal interpretation of Norse legends, set against a backdrop of pulsing, impressionistic paintings of mountains, fields, and other landscapes. In some stages, rock giants sauntered in the background over craggy cliffs and dramatic skies. It sets Munin apart, and gives the world a sense of resonance and eerie beauty I'll not soon forget.

The inconsistent physics and occasionally loose controls were also aggravating. Sometimes I'd make a difficult jump only to find my character stuck on a piece of a ledge. Other times, pressing the jump button didn't work at all, causing Munin to plummet to her death. In one particularly bad instance, I was stuck on a stage for 45 minutes because a ball wouldn't drop properly onto a platform. These little annoyances wouldn't have been a problem except that they were often coupled with the unnecessary frustration of restarting a stage and losing precious progress.

My aggravation never lasted long, as Munin's intricate, often inspired puzzle design, and its impressive variety always pulled me back. The game is divided into themed worlds, each exploring a unique new mechanic. In one world, feathers only show up if two pieces of scenery are situated perfectly. Navigating the scenery, and getting the platforms to match up just so, was a formidable, pleasurable challenge. In another, I needed to manipulate tiny mazes with ghostly balls in order to activate or deactivate platforms for Munin to use. Other worlds had me manipulate water and lava. Munin always had new twists on its core mechanic to challenge me with, and that kept things fresh throughout the game.

That variety kept me engrossed even when Munin's rough spots got under my skin. If ever I was frustrated with the ball puzzles in one world, I could easily go to another world and take on, say, the water puzzle I was struggling with the night before. Munin gave me plenty of options, so I rarely found myself stuck in a rut.

Munin may be rough around the edges, but it has an inspired core

Munin frustrated me at times with floaty physics and the occasionally too-obtuse puzzle. But I couldn't stay angry at it — nor stay away from it — for very long. It burrowed deep into my mind, so much so that I started dreaming in its weird 2D logic of rotating platforms and constant twists to the formula. Like the severe landscapes it evokes, Munin is a worthy, starkly beautiful challenge.