Game developers have experimented with augmented reality titles on a variety of camera-enabled platforms, including handhelds like the Nintendo 3DS and PlayStation Vita as well as mobile phones running Android and iOS. A company called Blippar is working on the next step toward the kind of augmented reality experiences we've seen in the movies: gaming with a camera on your face — namely, Google Glass.

Blippar, which was founded in 2011, is an augmented reality firm that has worked with clients such as Kraft, Coca-Cola and Justin Bieber to produce marketing tied to the physical world. Ambarish Mitra, Blippar's founder and CEO, told Polygon in a recent interview that the company boasts the "fastest image recognition platform" in the world, capable of picking up "billions of images" in under 300 milliseconds with a mobile app that weighs in at less than 6 MB.

The philosophy behind Blippar, said Mitra, is that while "we are in the middle of a digital revolution and everything's going digital," the physical world remains relevant and "will always be relevant." He added that "bridging the physical with digital will drive better relevance, because you have an element of context.

"we will create a browser of the physical world"

"So we built Blippar with the whole ambition that we will create a browser of the physical world, and anything you look at, you get either utility information out of it or you get entertainment out of it," Mitra continued.

Blippar's existing technology is available in apps on Android, iOS and Windows Phone. The company recently began working with Google Glass: In February, Blippar was able to get its image recognition engine up and running on the platform, and now the company has been able to make it interactive.

Mitra called Glass a "very natural extension of [Blippar's] being," and a "validation of AR." But according to Mitra, Google has yet to fulfill the promise of Glass that it presented when it unveiled the first prototype at Google I/O 2012. The Glass games that Google initially showed off weren't really AR experiences in that they "had nothing to do with the physical environment." Blippar is taking advantage of a variety of Glass' hardware capabilities. 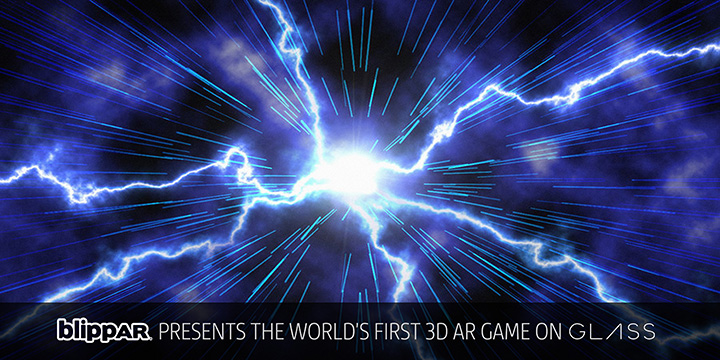 We tried an early tech demo that gave us an idea of how far Blippar's multifaceted technology is. Mitra taped a poster-size version of the image above to the wall, and then we put on Google Glass. Within a few moments, the device's camera recognized the image, and rocks began flying at our face. Our task was to avoid the rocks by moving our head. The rocks were coming at us in three dimensions, so we had to time our dodges well; it was as if we were evading bullets in Superhot.

The game was running on an Android phone and was being displayed on Glass via Bluetooth, so there was a lag between our movements and the in-game effects; Mitra attributed that to the older Android phone being used and the wireless connection. The frame rate was crawling, too, but we were able to get an idea of what's possible with Blippar's technology. And according to Mitra, the rock game is intended merely as a proof of concept for developers.

"you can have multiplayer gaming just by looking at things"

"This is proving that you can actually even start thinking about building games on Glass which are three-dimensional in nature," said Mitra. Blippar plans to release a software development kit for augmented reality Glass games in July.

According to Mitra, Blippar's technology is platform- and hardware-agnostic; even if Glass doesn't succeed as a commercial product, Mitra believes that augmented reality will continue forward. And the company has high hopes for interactive augmented reality experiences, such as the technology's power to enhance physical toys. Mitra spoke of playing with Lego minifigures, which remain popular today even though they're static pieces of plastic.

"That very character can come to life and start shooting lasers at other characters," said Mitra of Lego.

"And you can have multiplayer gaming just by looking at things," he continued. "And this is where we believe a lot of gaming companies will start thinking beyond the boundaries of a disc or just a shell of a computer."

Dead by Daylight’s next Killer is a big, bony bogeyman

League of Legends’ next Void champion gets a terrifying teaser