Tropico 5 made me feel powerful in the worst way.

Embezzlement. Human rights violations. The cancellation of women's right to vote. Political assassination. These are just some of the light-hearted game mechanics to be found in Tropico 5, a city-builder with a twist.

It's the latest in the series of tongue-in-cheek strategy games, and the third to be made by developer Haemimont Games. And, much like its predecessors, it aims to put the fun back into dysfunctional totalitarian government.

But while the game itself works well, the satire it relies on so heavily does not. Tropico 5 tries to be funny but ends up as a childish thing, a game light on substance and seemingly unaware of its own internal ironies.

In Tropico 5 you play as a colonial governor whose family grows, over hundreds of years, to become the dynastic dictators of a tiny, lush banana republic. I started the game in the colonial era as a governor assigned by the British crown, and moved through a timeline dotted with multiple world wars and into the present day. 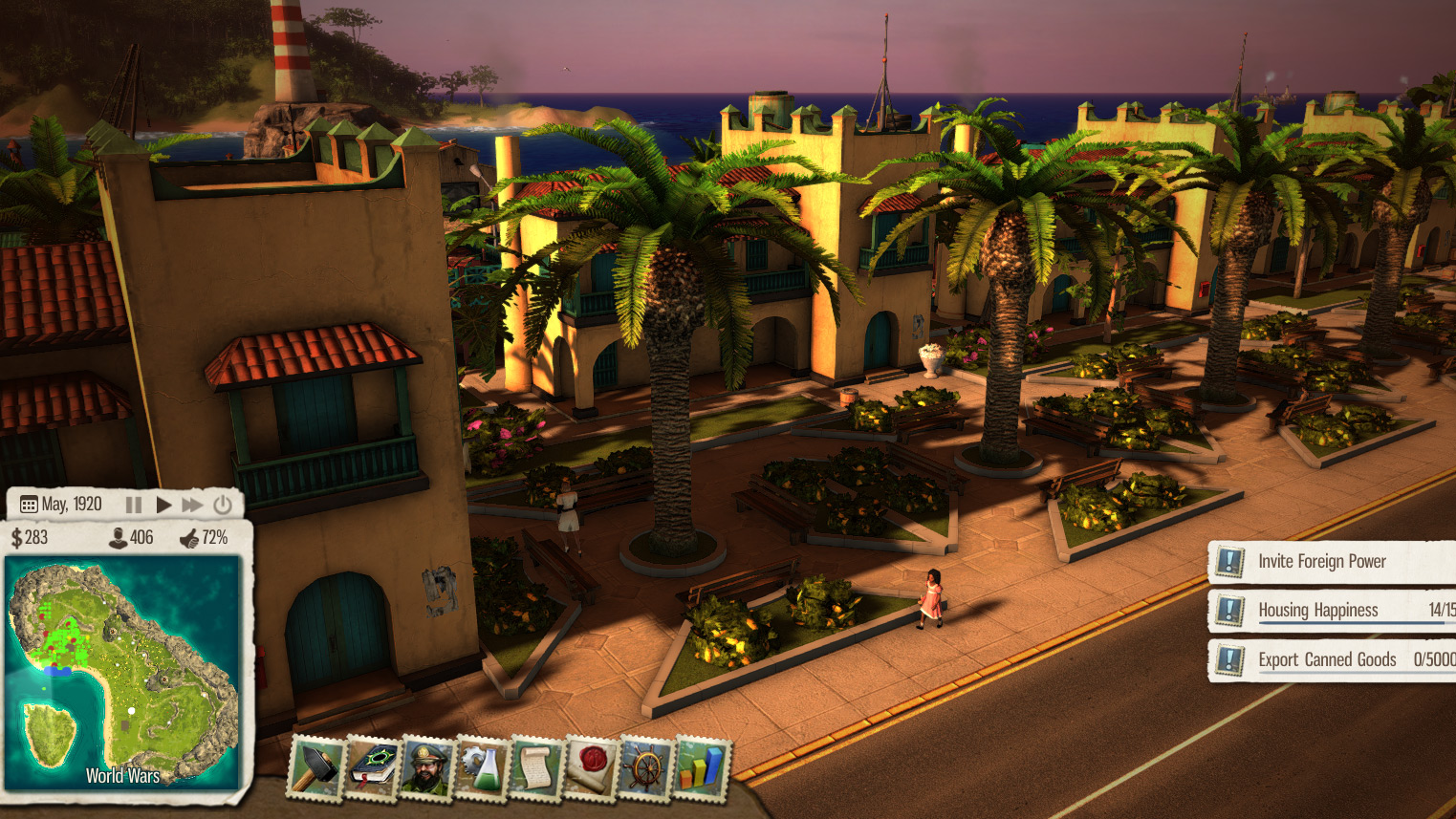 Externally, my country drifted into and out of the sphere of influence of the Axis powers, the United States and eventually even China. Internally, political factions tried to undermine my authority and topple my government from within. These are the complex political waters I had to navigate in Tropico 5.

As with most city-builders, I had to purchase and maintain a variety of buildings. Plantations, ranches and mines dominated my time in the early game. But eventually my economy evolved into an industrial and commercial force. I began the game selling tobacco and pineapples, and finished it peddling high technology and pharmaceuticals on the open market.

But I didn't have to plow the fields under and build skyscrapers over them. I was delighted to see that even as my nation moved into new eras, there was still a need for older structures. When my banana plantation was no longer a source of income, it was still valuable for feeding my inhabitants and my colonial-era fortress eventually became a tourist attraction.

Despite the natural evolution of my early resources, the message behind Tropico 5's satire first began to show its cracks within the tech tree. Leaving aside the story as it is told — that you are a European governor whose family has taken control of a native population and installed yourself to rule them — I was shocked to find that nearly every technological advancement takes agency away from the society that is researching it. 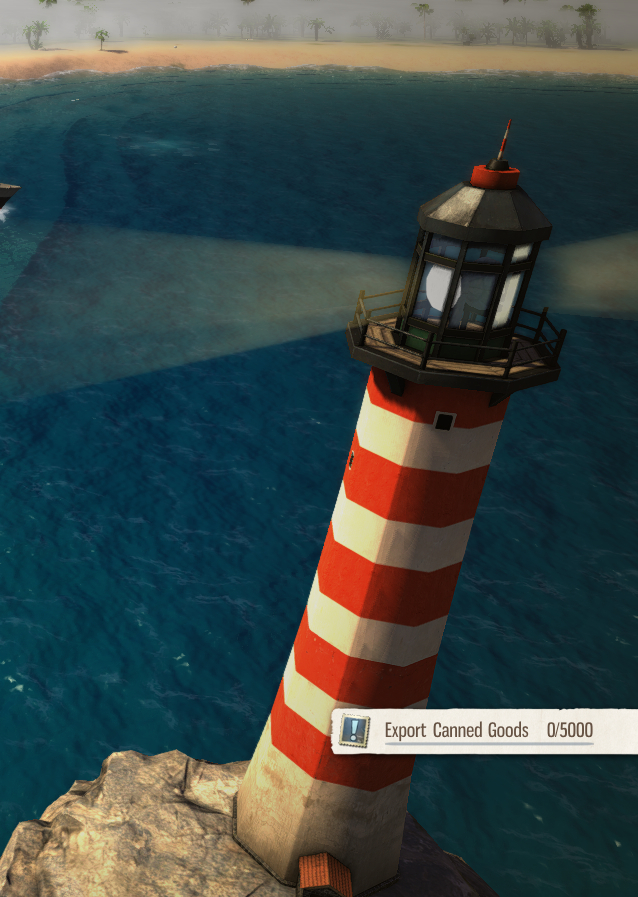 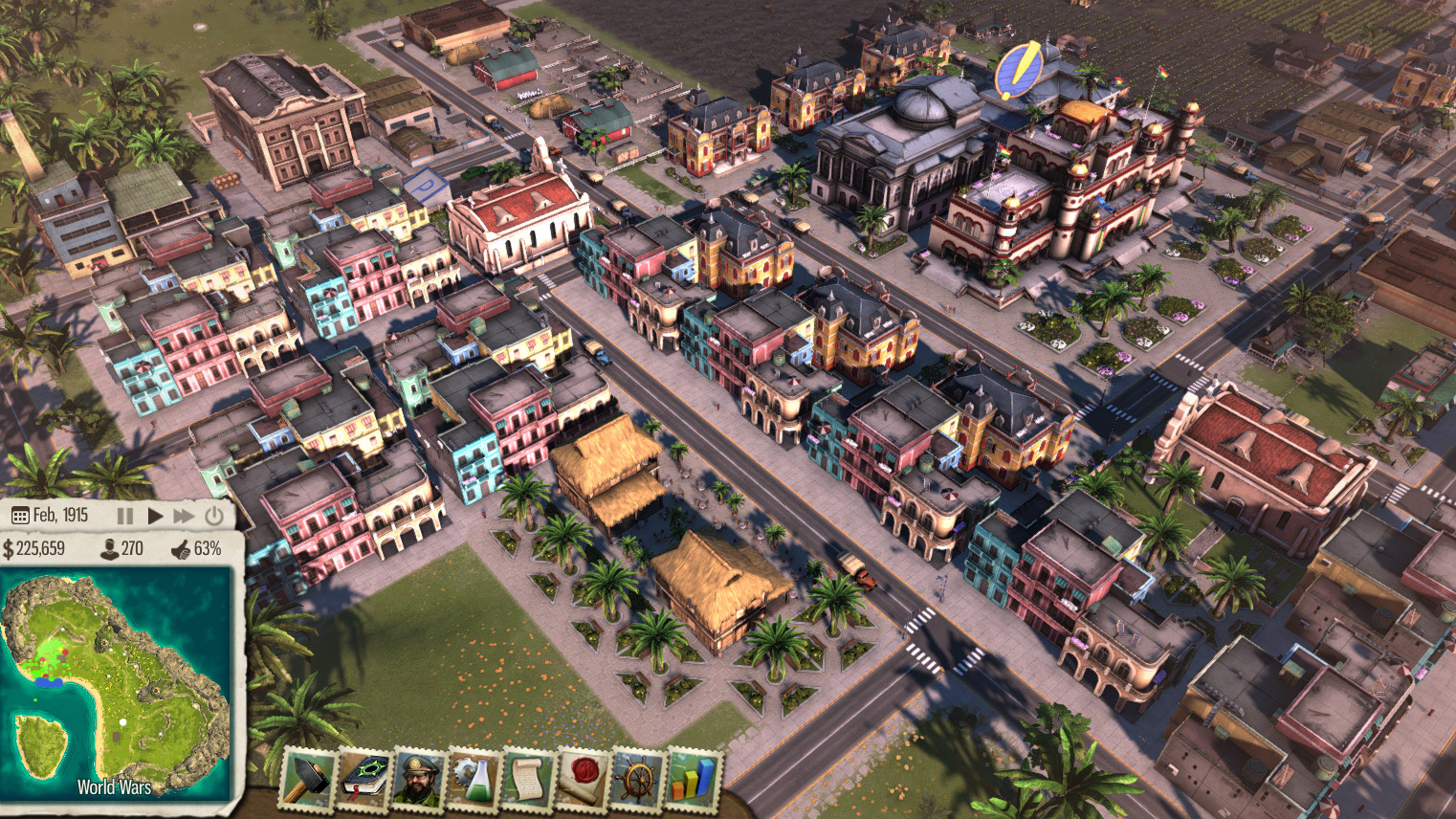 Blood on the sand

During loading screens players are treated to a series of gorgeous oil-paintings, the kind you might pick up yourself at a roadside stand on some tropical island. Each one has a sentence or two that shares some lighter anecdotes about infamous dictators. Instead of injecting levity into the game, they only served to darken the mood.

The game sells itself as an escape from the confines of traditional city-building video games that take themselves too seriously. But then in this game you can watch as soldiers run from your palace, kick in the doors of private homes and shoot dissenters in their sleep. Then, you can look at the individual family trees and confirm that you have made their partners into widows and orphaned their children.

It was hard for me to get perspective on all the charming quirks of Kim Jong Il, Envar Hoxha and Nicolae Ceaușescu — people who I was imitating in the game — when I knew that they were responsible for the rape, murder and enslavement of many thousands, perhaps even millions of real people. Instead of making me chuckle, Tropico 5 constantly reminded me of all the blood staining my hands.

As presented, advancements are either stumbled upon through buffoonish accidents or stolen from more advanced countries. I didn't discover embassies, I stole the technology from the French. I didn't invent the tank, I hotwired one and took it on a clumsy rampage through Europe. Even with institutions in place like libraries and universities, the best your backward people can do is ape more successful civilizations. The gag got old quick.

The comedic missteps didn't stop there. The text of one technological advancement made a dated Brokeback Mountain joke; another promised that your male soldiers could become more highly trained only after each of them has had sexual congress with the winner of a beauty pageant.

Everything is a joke in Tropico 5, but very few of them are funny. What could have been a poignant, perhaps even hilarious commentary on the nature of narrow-minded dictators merely served to enforce the game's backward world view.

It's a shame, honestly, because the gameplay here is good. Every feature instilled a sense of power. I was able to bulldoze tin shacks to make way for mansions or quell riots by paying off the right people, and the ability to execute rebel sympathizers was just a mouse click away. Tropico 5 let me explore what it means to govern as a dictator, and worked against the conventions of traditional city building games.

What that means, however, is that many of the game's features are overpowered to a degree that makes Tropico 5 less challenging. With enough money in the treasury or debt on the international market, most "problems" I encountered could be made to go away.

While it lead me along the easy path to victory, Tropico 5 also took great care to lull me into a dreamy haze. The art direction pushes the best parts of life in the Caribbean to the forefront, always providing something beautiful to look. Even the load screens, oil-painted Caribbean landscapes, are gorgeous.

That attention to detail was extended to the many buildings available for purchase. Tropico 5 doesn't settle for a single set of cookie cutter tiles. As I broke ground on each era the structures had a distinct look, and as my city aged it began to develop character. I was able to look back on all the time I had put in over the past century of progress and see the different neighborhoods that had begun to take shape; a historic district from the turn of the century, a modern commercial sector, even an old-time colonial government district sprinkled with museums.

The very best vacations are ones you can take with your friends, and Tropico 5's multiplayer did not disappoint. Racing against another player for milestones in my country's development felt like an authentic way to simulate the stresses common to real city management. Often there was not enough time or money to keep the country running the way I wanted it to, and my citizens suffered for that. Similarly, the cooperative multiplayer mode showed me interesting solutions to problems I had encountered in growing my country past a certain point. I would recommend the title to those looking for a fun and engaging cooperative game.

Tropico 5's multiplayer did not disappoint

Tropico 5 made me feel powerful in the worst way

Tropico 5 succeeded in making me feel powerful, and it enabled me to create a world in my image. But the game so entirely lacks compassion that it made me feel like a bully. There's an undeniable tension between the player, in the role of The Dictator, and the citizens. Tropico 5 fails to reconcile that conflict in a mature way, missing its shot at changing the series from a thoughtless getaway to a memorable, meaningful trip.