Playfish founder and former head of EA Digital Kristian Segerstrale wants to do for multiplayer online battle arenas what Halo did for first-person shooters: Widen their audience and mold the genre into what he and his new studio believe is the best hardware for them.

"What is really interesting about the industry is, you have more than 400 million tablets out there, growing at tens of millions more a quarter, and there are still no core games," he told Polygon. "No one thinks of tablets as their primary core gaming hardware today.

Bo Daly — CEO of Super Evil Megacorp and former member of Rockstar and Gazillion Entertainment — said that the studio's idea of a "core game" is one that isn't an add-on to players' lives, but a planned part of it.

"The way we think about core games is: these are games people will play for hours on end and play for years," Daly told Polygon. "These are the type of games we're interested in building, games players will grow with and will organize their lives around, not just something they fit into the spare moments of their day." 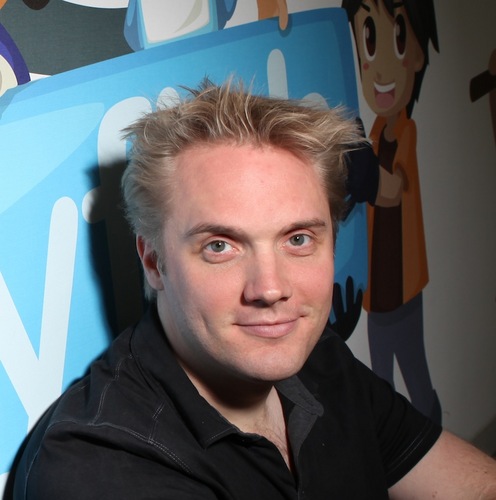 "Someday someone will put out [a core game for tablets], and we're hoping that's going to be us," Segerstrale said. "But we think it will be a mega trend and we‘re happy to be a part of it."

Super Evil Megacorp has quietly and stealthily been working for a little over two years, having formed in Feb. 2012 with veterans from Rockstar, Riot, Insomniac and Blizzard — just to name a few studios. Segerstrale told Polygon the studio's goal is to "create the best home" for bringing up a tablet MOBA.

"Tablets could be, in some ways a better platform to play the game on than even PCs."

Daly described Vainglory as an "unapologetically core" game designed specifically for the intimacy of portable devices. Vainglory is a three-versus-three synchronous multiplayer game, with each player participating from their own device. Like League of Legends for tablets.

"We felt that tablets could be, in some ways a better platform to play the game on than even PCs," Daly said. "We spent a lot of time really crafting Vainglory to make sure it felt responsive enough that pro-level MOBA players will feel it lives up to their exacting standards. The most exciting thing about tablets for core gaming is, you think about the types of games we usually think about when we say 'core gaming,' these 1000-hour games where teamwork and strategy overlap and working closely with each other is paramount — it works.

"We think tablets are very inherently personal devices, but also inherently social, possibly the best space for multiplayer play," he added. "In a way, we are reinventing the LAN party — everyone has their own device but they can be physically in the same space and having the same experience together."

Segerstrale noted that Super Mega is hoping to draw eSports players with Vainglory, with the studio working to include the tactical depth and replay value inherent in current on-the-market MOBAs like DOTA 2 and League. But he feels the tablet space is ultimately more approachable, and perhaps bringing the genre to this more personal sector will make it less alienating to new players.

"In a way, we are reinventing the LAN party."

MOBAs tend to be a solitary experience overall, he said: You think of the player at home sitting in their chair, headphones on, blocking out the world and focusing on their screen. Vainglory is on tablets because Segerstrale and Daly want to know players are interacting with each other, crowding into the same room with their tablets in their laps, sharing strategy and face time.

But in addition to that, Segerstrale and Daly feel the way MOBAs are laid out are perfect for tablets — in fact, they may be better suited to tablets than their native computers. Segerstrale said that he feels the movements of a MOBA — the near-constant clicking, strategizing, moving, thinking — will work better on touchscreens, where a move is a swipe away and your teammate could possibly be at arm's length.

"We love [MOBA] because it creates this type of enthusiasm," Daly said. "And that's the kind of company we want to be, that has a vibrant fan base that loves the product the way we do. For us it's very easy to see ourselves making that kind of game as players and designers of that type of game already; we already know it inside and out and feel that we could deliver on that very well.

"I kind of feel like MOBAs were invented on the wrong platform," he added. "We're taking the opportunity to bring the most exciting competitive game genre in the world right to possibly the best platform right now. It's too big an opportunity to not go after."