Share All sharing options for: Cult film Sharknado is getting a video game spin-off on July 30

Cult hit film Sharknado is getting a video game spin-off releasing in time with the launch of the movie's new sequel Sharknado 2 on July 30.

The game sees players destroy shark-infested tornados threatening New York City, while wielding chainsaws and jumping off the backs of tiger sharks. It's being distributed by Majesco Entertainment and is in development from Canadian studio Other Ocean, best known for its work on Ultimate Mortal Kombat and Dark Void Zero.

Sharknado: The Video Game is right now being developed for iOS and tablet devices, a decision which Syfy channel vice-president Jeff Li said was due to time constraints as the game would need to be developed quickly to launch alongside the new film, Hollywood Reporter reports. According to the Syfy exec, if the mobile game is a success then a console release may be on the cards.

So far there are over 45 licenses for Sharknado products, with plans for a third film to release next year. According to Li, he hopes this franchise becomes their Fast & Furious, in other words a franchise that will continue for years to come. 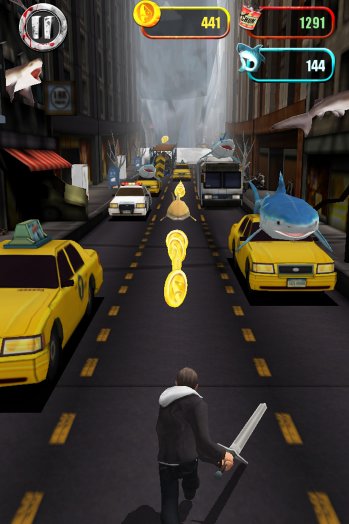